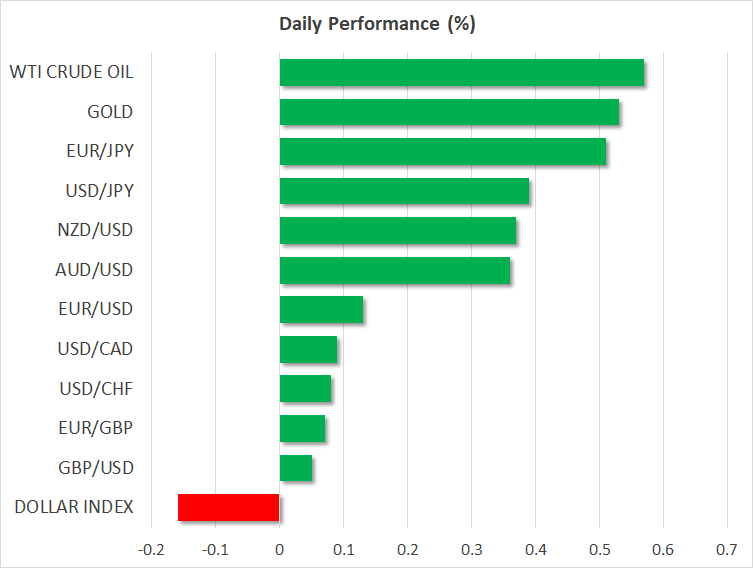 Geopolitical tensions and recession fears appear to have faded into the background for investors as shares on Wall Street staged another impressive rally on Wednesday, while safe-haven currencies retreated further. Another round of better-than-expected earnings reports for the second quarter boosted optimism about the corporate outlook.

Whilst profits are generally down across the board amid slowing demand and rising costs, investors didn’t have high expectations going into the earnings season so the bar to impress had been set quite low. But equally impressive has been the positive surprises in the latest guidance by many of Wall Street’s big names, including PayPal and Gilead Sciences yesterday.

Today’s earnings highlight will come from Alibaba Group Holdings and tech stocks in Hong Kong were rallying ahead of it. The Hang Seng index was last trading almost 2% higher, leading the gains in Asia.

Shares in Europe were mostly higher too, though US futures were mixed, suggesting a pause for breath after yesterday’s big jump. The S&P 500 closed up 1.6% at a two-month high but it was outperformed by the Nasdaq Composite, which rose to the highest in three months to finish the day up 2.6%.

Making sense of the data and the Fed

Also contributing to the upbeat mood in equity markets was the ISM non-manufacturing PMI out of the US on Wednesday that defied expectations of a slowdown in July. Growth in the US services sector picked up some steam last month according to the closely watched survey. The employment index ticked higher, though it remained below 50, but the prices paid index dropped sharply, in another indication that inflationary pressures are easing.

Recent US data have been quite mixed, causing angst among investors that the world’s largest economy is headed for recession. But it seems that despite two consecutive quarters of GDP decline, the underlying economy is still growing.

Most importantly, the upward drive in prices seems to be losing momentum and investors are questioning the very hawkish language coming from the Fed.

Fed policymakers continued to push back against market expectations of a rate cut in 2023 in fresh remarks yesterday. A chorus of FOMC members cast doubt on the possibility of rates being cut so soon and reinforced the Fed’s resolve to get inflation back down to 2%.

Markets are either taking solace from the messaging for the September meeting, where it’s looking likely that most policymakers are leaning towards a 50-basis point hike, or they are simply not convinced by this extremely hawkish rhetoric.

Dollar and yields softer, yen pulls back as tensions subside

The US dollar extended its gains on Wednesday, mirroring the rebound in Treasury yields on the back of the hawkish talk by the Fed. But it’s off its highs today, likely due to the easing of the risk aversion that had gripped the markets earlier in the week.

Tensions between the US and China remain elevated following House Speaker Nancy Pelosi’s visit to Taiwan on Tuesday. Beijing sees Taiwan as part of China and is therefore claiming that Pelosi’s trip infringed on its sovereignty. The move has sparked the biggest military drills by the Chinese military around Taiwan’s coastal areas since the Taiwan Strait crisis in 1995 and 1996.

But markets aren’t worried that the situation will escalate further and the flight to safety is receding, pushing the Japanese yen broadly lower. The dollar was back above 134 yen on Thursday, though against other currencies, the greenback edged lower.

The aussie bounced back the most and the loonie lagged following yesterday’s plunge in oil prices. Crude oil prices initially spiked on the OPEC+ decision to raise output marginally by 100,000 barrels a day in September. But a large build in US inventories in the weekly report later on sent the price tumbling.

The pound, meanwhile, was recovering modestly from the dollar’s resurgence, climbing to around $1.2165 as traders awaited the Bank of England’s policy decision due at 11:00 GMT. The BoE is widely expected to announce a steeper rate increase of 50 bps, but the pound may not get much of a boost if the MPC vote is split or Governor Bailey signals that more big hikes are unlikely.

The Bank will also decide whether to start the active sale of its gilt holdings so some volatility in UK government bonds is possible. 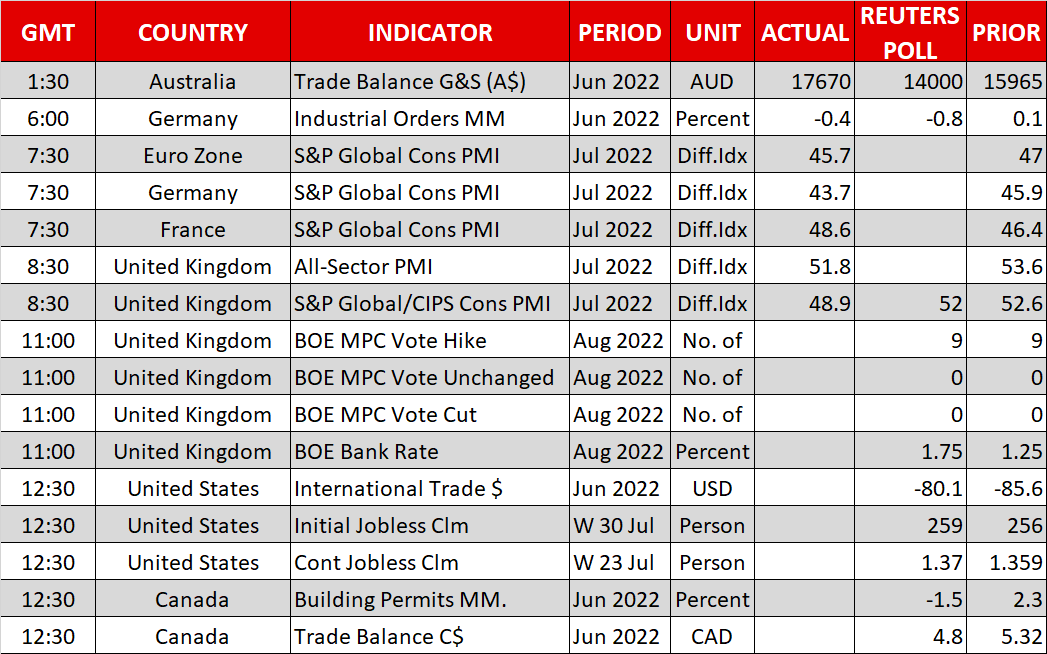