Google’s parent Alphabet is set to unveil its financial figures for the second quarter of 2022 on Tuesday, July 26, after Wall Street’s closing bell. The third most valuable publicly traded company in the US is expected to record a double-digit year-over-year revenue growth but experience a decline in annual earnings. Last weekend, the company completed a 20-for-1 stock split, which is normally considered a sign of strength by investors. However, the current unfavorable environment of rising interest rates, increasing signs of a recession and persistently high inflation could spell greater trouble for tech stocks.

Since the beginning of the year, the Fed has entered an aggressive rate hike cycle in an effort to cool down inflation, which is running at multi-year highs. This tightening policy has triggered a long-lasting sell-off in bond markets, which has been pushing bond yields higher, causing discount rates to increase and valuations to decrease accordingly. This development is extremely negative for tech companies as their performance heavily relies on their growth prospects, while higher interest rates could also discourage borrowing, reducing firms’ dry powder for new investments and developments.

Additionally, markets have been flooded with a plethora of risks. Firstly, the high and sticky inflation that has been exacerbated by the Russian invasion of Ukraine and China’s latest wave of lockdowns, has significantly curtailed consumer spending. Since most of Alphabet's business relies on advertising revenue, broader economic slowdown would lead to companies reducing their ad spending in the face of an approaching recession, delivering a direct blow to Alphabet’s core business.  Moreover, Alphabet’s huge exposure to foreign markets could prove to be a major headwind as its income in foreign currencies is continuously devaluing due to the greenback’s outperformance. 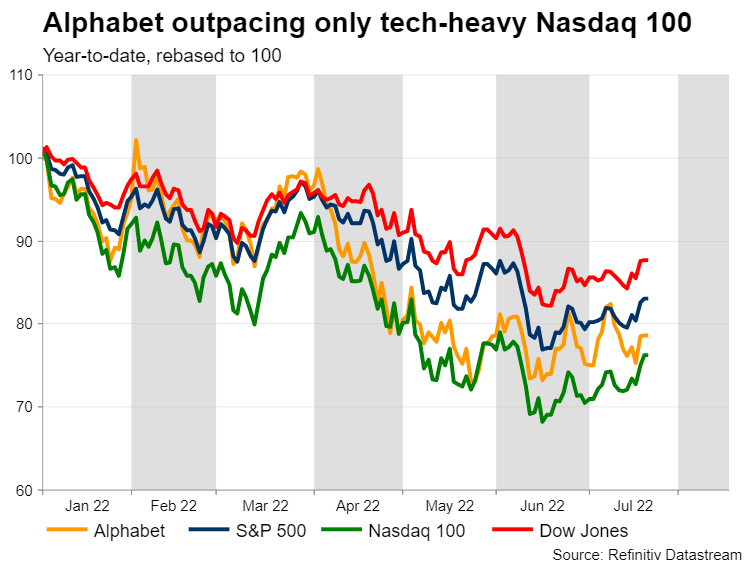 To prepare for leaner times, Alphabet reported that it would start scaling down its operational costs. Indeed, on Wednesday, the company announced that it is advancing its hiring slowdown to a complete pause on hiring for two weeks. The news was enough to lower analysts estimates for the upcoming earnings report as fears that it will not be a temporary halt are mounting.

Despite its efforts to diversify its income streams, Alphabet receives over 80% of its revenue and a high percentage of its profits from digital ads. Its major competitor in the ad industry, Meta, is facing significant issues due to the new privacy policy adopted by Apple, causing it to lose approximately $10 billion dollars of revenue. Therefore, Google’s licensing deal with Apple could enable it to absorb Meta’s lost market share as it is the main alternative option for advertisers. This move will probably enable the firm to boost its revenue and expand its margins due to the lack of competition.

Mixed financial figures are expected for Alphabet. The tech giant is expected to post revenue of $70.10 billion for the fourth quarter, according to consensus estimates by Refinitiv IBES, which would represent a year-on-year growth of 13%. Additionally, earnings per share (EPS) are estimated to decrease 5% on an annual basis to $1.29. Furthermore, investors will be closely eyeing the performance of Google's Advertising business to assess the impact of the imposed ban on Russian accounts, with the ad segment’s revenue anticipated to grow 12.2% year-on-year.

On the brighter side, Alphabet’s valuation could be considered attractive for many investors, who bet on its growth prospects but also waited for a potential downside correction to step into the market. The 12-month forward price-to-earnings ratio, which denotes the dollar amount someone would need to invest to receive back one dollar in annual earnings, currently stands at 19.8 against the technology sector’s average of 78.00. 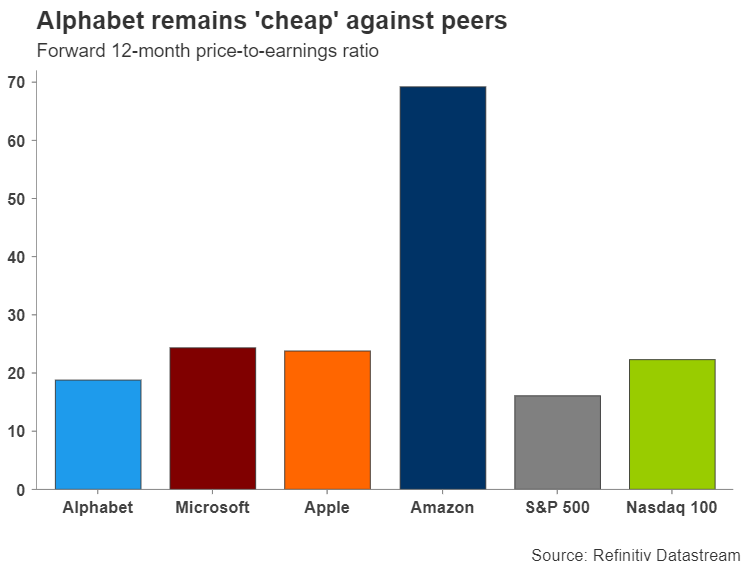 What happens after a stock split?Alphabet proceeded with a 20-for-1 stock split to increase liquidity and enable retail investors to obtain shares. Usually, companies that perform splits have experienced sustained market outperformance and try to benefit from the immediate positive momentum as most of the times investors want to increase their exposure after the split is completed.In addition, based on Bloomberg data, S&P 500 companies that executed a stock split have on average outperformed the index during the next 12 months. However, investors should always remember that a company's fundamental outlook is the main factor that could create value and drive a stock price higher in the long run.

Can the stock price recover?

After a solid 2021, and an even stronger start in 2022, which led to a new all-time high of $151.50, Alphabet’s stock price has lost around 21% of its value year-to-date. This underperformance is mainly attributed to the broader sell-off in risky assets and not to idiosyncratic factors.

A positive surprise in the upcoming earnings report could propel the share price higher towards the recent peak of $120, with another break opening the door towards $131.50, which overlaps with the 200-day simple moving average.On the downside, further selling pressure triggered by poor financial results may send the price to test the $108.50 barrier, a violation of which could shift attention to the 2022 low of $102.

Technical Analysis – US 100 index bounces off 200-week SMA, but for how long?