Is Microsoft an attractive play ahead of its Q2 earnings? - Stock Market News

The upcoming week will be packed with major US tech companies’ earnings releases, which are expected to draw significant attention as the tech gang is going to face a tough year-ago comparison when revenue and profits were surging due to the pandemic's repercussions. The software behemoth Microsoft is the first to unveil its Q2 financial performance on Tuesday, July 26, after Wall Street’s closing bell. The third most valuable publicly traded company in the world is expected to record solid revenue and earnings figures, despite its share price depreciation of almost 23% so far in the year. Can a solid financial performance offset the tech industry’s mounting macroeconomic headwinds?

Many risks on the table

In 2022, the Fed’s ongoing rate hike cycle to counter inflation has triggered a broader sell-off in tech stocks. It is common knowledge that rising interest rates directly reduce the value of companies’ future cash flows, which is an extremely negative development for the tech sector as its performance heavily relies on its growth prospects. Furthermore, higher interest rates could discourage borrowing, reducing firms’ disposable funds for investment and development spending.

Additionally, Microsoft has been suffering from the Russian invasion of Ukraine and its imminent consequences on the global economy. Specifically, apart from the loss of the Russian market share as Microsoft suspended new sales in Russia, the war has exacerbated inflationary pressures, increasing prices of raw materials that are essential for Microsoft’s computing business. Moreover, the war coupled with China’s new wave of lockdowns have deteriorated supply chains, severely impacting the sales of Microsoft products as global PC shipments have declined almost 15% annually. 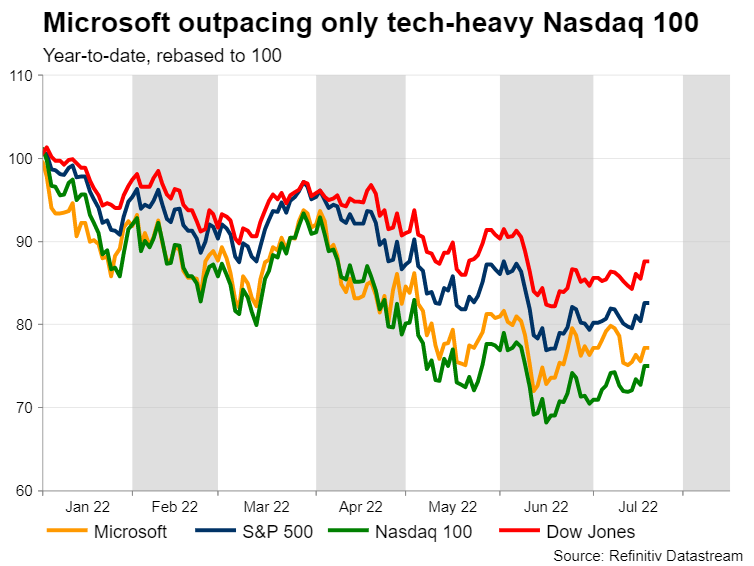 Microsoft is also anticipated to be adversely affected by the stronger dollar as its performance is largely dependent on its global businesses, while more than 50% of its incremental growth stemmed from outside the US in 2021. Lastly, Microsoft’s president announced earlier this week that tech companies are entering a new era of stagnating workforce participation, which may create permanent upside pressures on salaries.

Microsoft already operates a sizable advertising segment, which generated around $10 billion in revenue last year, but this was a massive underperformance compared to its sector peers such as Google. Therefore, its deal with Netflix will likely have huge financial benefits as Microsoft will build pioneering technology and marketing features for a guaranteed customer that currently has 220 million subscribers. The potential gains are infinite if we consider that through this contract Microsoft will be motivated to create and operate state-of-the-art digital advertising tools that can attract a substantial number of renowned customers in the future, enabling it to expand its business into another prosperous sector.

Poised for a solid financial performance

Microsoft is set to post a strong second quarter performance even though the macro environment has been constantly deteriorating so far in the year. The software giant is expected to report revenue of $52.47 billion, according to consensus estimates by Refinitiv IBES, which would represent a year-on-year growth of 13.70%. Earnings per share (EPS) are estimated to jump to $2.29, producing a minor increase of 5.7% compared to the same quarter a year ago.

Hence, the upcoming financial results are anticipated to reflect once again the diversification efforts of Microsoft have indeed materialised, helping the company cope better with exogenous supply and demand shocks.

Markets seem confident that Microsoft can achieve its growth targets. The firm is currently valued with a trailing 12-month price to earnings (P/E) ratio of 27.9, which is a massive outperformance considering the technology sector’s average of 10. Furthermore, its forward 12-month P/E ratio is currently at 24.4, with all of its major competitors and benchmarks except Amazon reporting a significantly lower figure. Therefore, investors seem to be pricing in massive growth potential for the firm, while it could also be also argued that the stock is currently overpriced.

Will the stock rebound?

After a stellar 2021 in which Microsoft’s stock price marched to a new all-time high of $350, 2022 brought some weakness. Therefore, investors will be closely eyeing the firm’s Q2 earnings release for signs of persistent fundamental strength, which could halt or eventually reverse the downtrend.

To the upside, a positive earnings surprise could propel the price towards the recent peak of $269. Successfully breaching this region, the price might then test the $293 barrier.

Alternatively, should financial figures disappoint, the bears might aim for $253. A violation of the latter could open the door for the 2022 low of $242.

Technical Analysis – Facebook breaks the lower bound of a range