Facebook’s parent company, Meta Platforms Inc, is set to report its Q2 earnings on Wednesday, July 27, after Wall Street’s closing bell. The social media behemoth is going to face an extremely tough year-on-year comparison as the decision to prohibit Russian users from using its applications had an adverse effect on both subscriber and advertisement growth figures. Aside from that, the firm has been experiencing an alarming number of macro and idiosyncratic risks, causing its share price to nosedive 50% in the year to date. Considering its growth prospects, is Meta’s share price in ‘value’ territory after this brutal sell-off?

Not a good year for tech stocks

Meta has been one of the worst-performing stocks this year amid an unfavourable macroeconomic outlook, rising competition, and a wide range of idiosyncratic risks. Firstly, since the beginning of 2022, investors have braced for a series of interest rate hikes by the Fed, which have been directly reducing the value of all companies’ future cash flows as well as discouraging borrowing to fund new investments. That said, tech firms whose performance heavily relies on their growth prospects would be among the most affected. 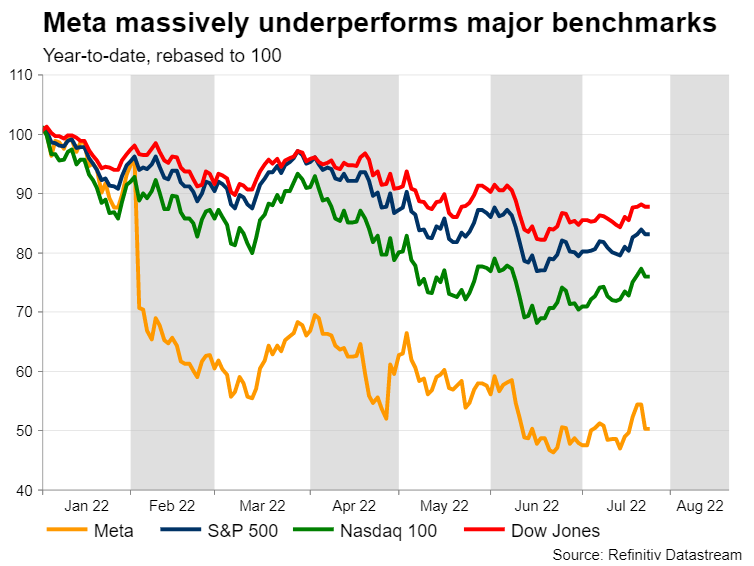 Moreover, Meta faces increased competition from short-form video platforms like Snapchat and TikTok, where users currently prefer to spend more of their leisure time, curtailing the time spent on Meta’s social media platforms. In response, Meta has been developing a similar type of short videos called Reels, but they have not yet managed to monetize at higher rates than Feed and Stories. This intense competition led to the firm’s revenue per user number declining for the first time in history in the previous quarter, while it is not anticipated to recover in the upcoming report.

To make matters worse, the changes in privacy settings introduced by Apple have made it much harder for Meta to collect the necessary data to track people’s online behaviour so as to provide them with advertisements relative to their interests. This development has largely weighed on Meta’s revenue as marketers would prefer to allocate their capital to platforms that can advertise products to a more targeted audience such as Alphabet, which snatched a licensing deal with Apple. Unfortunately, these changes came at a time when demand from advertisers has already started to wane as firms reduce spending due to increasing fears over a global recession.

There are key reasons why Meta retains its long-term growth prospects despite being punished by investors so far in the year. Firstly, Meta is the largest collection of social platforms globally, with networks such as Instagram and WhatsApp compensating for Facebook’s stagnation. Furthermore, it has the most advanced and developed design in augmented reality with its Metaverse app, giving it a lead against peers and the ability to dominate this vastly developing tech segment in the future.

Additionally, Meta has around $48 billion of cash on its books and zero debt, enabling it to hunt growth opportunities during these adverse periods or even proceed with buyback programs. The lack of disposable funds combined with the increasing borrowing costs has led many of its competitors to abandon innovative and ambitious projects, giving Meta the opportunity to expand in those fields.

The upcoming earnings report is expected to reflect the magnitude of the aforementioned headwinds’ impact on Meta’s financials. Specifically, forecasts by Refinitiv analysts suggest that earnings per share (EPS) are expected to fall from $2.72 in the last quarter to $2.59, which would represent an annual decline of 28.15%.

Revenue is projected at $28.95 billion, a marginal decline of 0.5% over the same period last year. Although this figure could initially sound good given the continuously deteriorating macroeconomic environment, it would be the first negative annual drop in the last three years.

Valuation looks more attractive than ever

On the current levels, Meta’s valuation could be considered attractive for many investors, who bet on its growth prospects but also waited for a potential downside correction to step into the market. The 12-month forward price-to-earnings ratio, which denotes the dollar amount someone would need to invest to receive back one dollar in annual earnings, currently stands at 13.4x. This ratio is not only way lower than tech-heavy Nasdaq’s average multiple of 22.3x but also against S&P 500’s 16.0x. 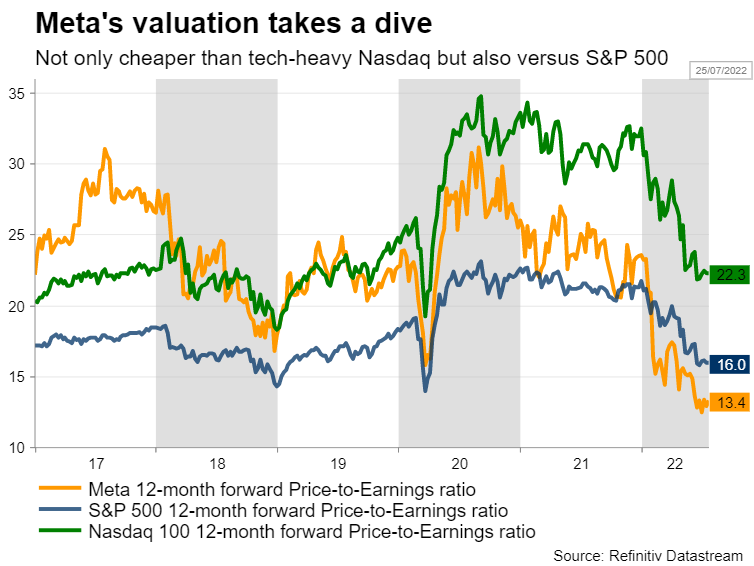 Overall, even if Meta is the largest underperformer within the FAANG, it’s difficult to argue that the firm does not have substantial long-term growth prospects. Considering that almost half the world’s population is using the company’s platforms, which include Instagram, WhatsApp and Messenger, even small developments in its business model can lead to tremendous increases in income and profits.

After a stellar 2021 in which Meta’s stock price marched to a new all-time high, 2022 brought a persistent weakness in the price action. Therefore, investors will be closely eyeing the firm’s Q2 earnings release for signs of fundamental strength even if macro and broader headwinds are multiplying.

In the positive scenario, bullish forces could propel the price above the 50-day simple moving average (SMA) to test the recent peak of $183. Successfully breaching this region, the price might then test the $297 barrier.

On the flipside, should financial figures disappoint, the bears might aim for the 2022 low of $154. A violation of the latter could send the price to form fresh lows, setting the stage for the March 2020 low of $137.