What to watch in Twitter earnings – Stock Market News

While the court fight between the social media platform Twitter and Tesla boss Elon Musk will remain front and center, investors will take a look at Twitter’s Q2 financial statement due for release during Friday's pre-market hours. After a significant slowdown in the first quarter, the company is expected to report a grim recovery, with the consensus recommendation from Refinitiv analysts being a hold.Eyes on advertising revenues

Twitter’s stock has been a laggard within the S&P 500 community over the past year, sinking more than 40% compared to the index’s average loss of 7.5%. But Musk’s acquisition process, which turned from a blessing to a curse for the company, is not the only thing responsible for the plunge. Jitters started to set in beforehand when the health of online advertising, which accounts for around 90% of the company’s revenues, entered a challenging period in the face of the pandemic.

The outlook for ad spending remains bleak given the growing financial distress over simmering inflationary pressures and a potential economic downturn in the foreseeable future, which during previous crisis periods sent marketing budgets diving, and perhaps this time may not be different.

Nevertheless, Twitter’s advertising revenue is expected to recover moderately to $1.22 billion in the second quarter after a deceleration in the first three months of the year, marking a quarterly growth of 10.6% and an annual expansion of 16.32%, which if materialized, would still be the slowest since the end of 2020. Earnings per share (EPS) may triple to $0.14 from $0.04 but remain the second lowest over the past year, standing 31% down compared to the same period last year.

User growth in spotlight too

The number of monetizable daily active users, or users who see advertising, will be another hot spot to watch since it’s an important metric for any social media company to attract advertising deals. The larger the audience, the more advertisers can be charged. However, according to Twitter officials, turning user activity into revenue is becoming a tougher job for the company and its peers. Understandably, that justifies the decision to lay off 30% of its talent acquisition team earlier this month following a company-wide hiring freeze.

If it manages to beat its own estimate of 13 million new daily users for the second quarter, Twitter could somewhat restore trust against Musk’s misbeliefs about how many real users the platform has. Particularly, to boost engagement in the platform, the San-Francisco based company has been experimenting new features since the start of the pandemic, with some of them such as the audio-related room Spaces and Twitter Blue premium offering being more successful than others such as the terminated Fleets feature, which was similar to Instagram’s and Snap’s stories.

Nevertheless, the battle to correct its damaged image that Tesla’s boss caused and regain integrity could be a long path. No matter which side will win the courtroom battle starting in October, Twitter will need to adjust its strategy and promote transparency in order to combat the perfect storm coming from TikTok and Apple’s own advertising business as recession fears build up.

Looking at valuation gauges, bearish signals are evident here as well. Despite its freefall in stock markets and the decline in valuation metrics, Twitter is still looking overvalued when compared to its peers in the industry, trading at a forward P/E multiple of 28.6x versus industry’s mean of 9.6x. 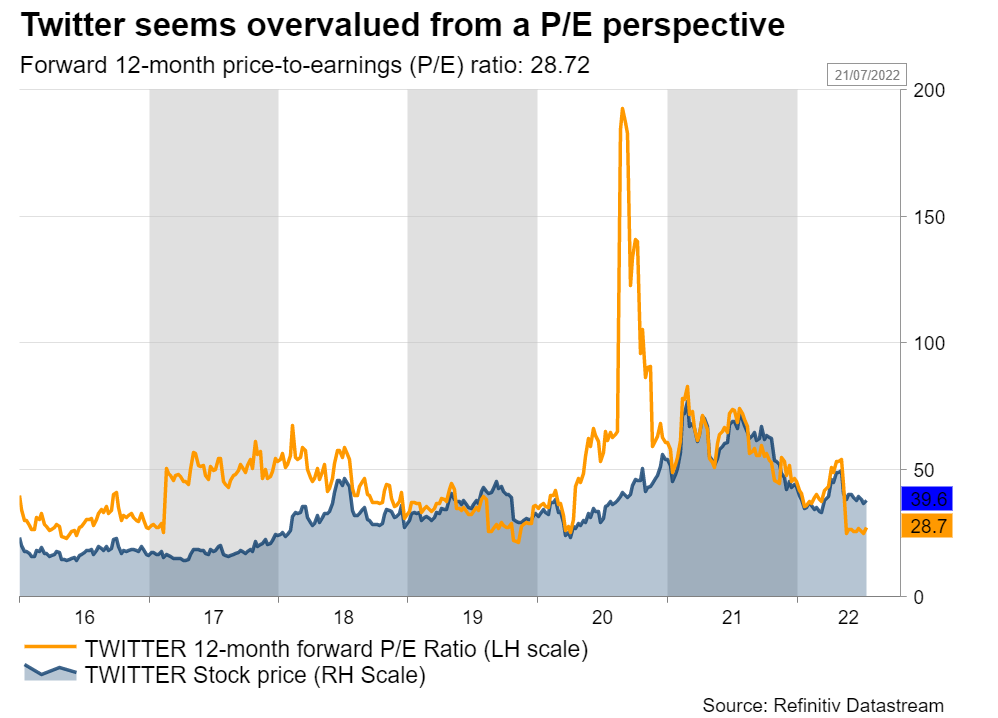 As regards the market reaction to Friday’s earnings report, the social media platform has removed its forward guidance due to the pending acquisition by Musk, while no press conference will take place for the same reason. Hence, any surprises in the financial statement and in the number of daily active users are expected to be the major source of volatility. Should the stats arrive better-than-expected, reflecting the company is still at a relatively good shape and has strong fundamentals to mitigate an economic stagnation, the stock could break its sideways trajectory above the 200-period simple moving average (SMA) on the four-hour chart at $40.50. In this case, resistance may initially pop up around the $42.00 psychological mark before a sharp increase drives the price up to $45.00.

In the event the data misses forecasts, the price could immediately test the nearby constraining zone of $39.00. If that base cracks, the decline might get congested between the 20- and 50-period SMAs at $37.86 and $36.14 respectively, while even lower, the bears would aim for the $35.00 handle.

Technical Analysis – Facebook breaks the lower bound of a range

Technical Analysis – US 100 index consolidates ahead of FOMC meeting