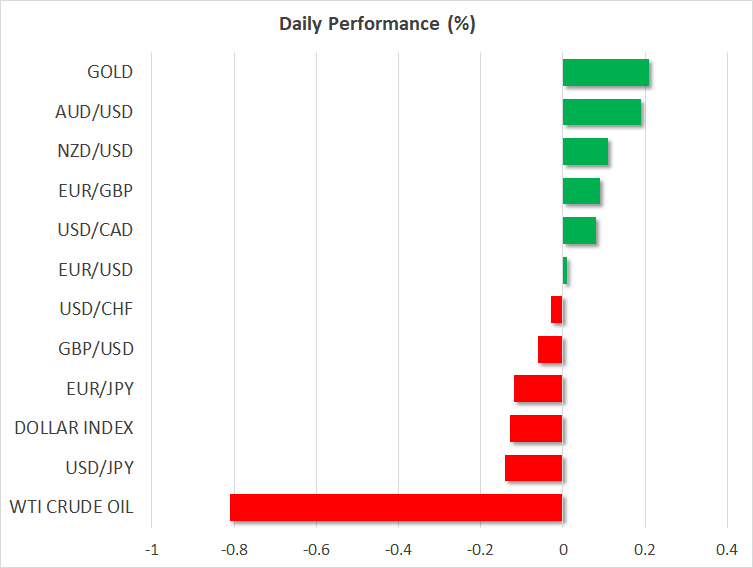 No letup in new virus cases yet

A continued surge in the number of new coronavirus cases being reported in hotspots around the world has taken the steam out of the risk rally this week, with not even robust data out of China and the United States able to cast the worries aside. A stronger-than-expected jump in June retail sales was overshadowed by another record increase in new infections in the United States on Thursday.

The US recorded more than 77,000 new cases yesterday – the highest in a single day for any country. Daily records were also broken in Tokyo and the Australian state of Victoria, fuelling concerns about how the re-imposition of restrictions and the ensuing damage to consumer confidence would impact a fragile economic recovery.

If there was one silver lining from this latest resurgence it is that the death rate has yet to catch up with the acceleration in new infections, especially in America where daily deaths remain well below the peaks seen in April.

That may be contributing to the market’s panic level being so low at the moment. But the main driving forces of this relative calm are expectations that additional stimulus is on the way in Europe and the US, as well as growing hopes of a successful vaccine for COVID-19.

Stocks in Asia and Europe were mixed on Friday following losses on Wall Street yesterday, though e-mini futures were indicating a positive open for the S&P 500 and the Nasdaq. The earnings calendar will be somewhat quiet today, with BlackRock’s results being the sole highlight. But after Netflix reported disappointing earnings guidance on Thursday, the next couple of weeks could prove quite testing for tech stocks, which have been under pressure all week amid a rotation out of the sector.

Having outperformed the broader market by a very wide margin, tech stocks also stand to be the biggest losers should the recovery start to falter, as virus cases soar, and trigger a major correction. That threat will likely keep investors’ focus on stimulus and vaccine headlines for the weeks and months to come.

Recent vaccine trials from Moderna and the University of Oxford have shown promising results, and this may explain why increasing news of regional lockdowns around the world hasn’t thrown the risk rally completely off course.

Markets hold breath for next round of stimulus

Perhaps a bigger danger for the markets than placing bets on preliminary vaccine data is the looming decisions on fiscal stimulus by US and European Union politicians.

EU leaders will hold their first face-to-face meeting today to try and hammer out a deal on a rescue fund to help virus-stricken European economies recover from the pandemic. But even with Germany’s full weight behind a generous package made up of mostly grants, there is still strong opposition from several northern European states.

Hence, an agreement this weekend is far from guaranteed and the euro is drifting sideways ahead of the decision.

The clock is also ticking in Washington as Congress is set to begin debating a new round of fiscal measures next week. But time is short as many of the existing benefits are due to expire at the end of the month, raising the possibility of a sudden cliff edge when the payments stop.

Nonetheless, the consensus among traders is that lawmakers are more likely than not to approve another fiscal package and the US dollar has been steadily edging lower during July on expectations that the recovery is sustainable, which have helped ease demand for safe havens.

In other currencies, the pound remained choppy, while the Australian dollar continued to outperform its peers, having almost erased its year-to-date losses.