The world’s largest company by market capitalization will report its quarterly earnings on Thursday, after Wall Street’s closing bell. Forecasts point to another solid quarter, with investors likely to focus mainly on key business segments like cloud computing. Overall, the company’s stock is on a tear, having gained more than 36% this year – though valuation is becoming a concern.

The Washington-based tech giant is expected to report earnings per share (EPS) of $1.21 when it announces its fiscal fourth-quarter results according to Thomson Reuters consensus estimates, which would represent a 7.1% increase from the same quarter last year. The most bearish analyst predicts $1.18, and the most bullish one $1.29. On the revenue side, the firm is anticipated to have earned $37.76bn – an almost 9% increase from a year earlier.

Microsoft has reclaimed its role as the tech leader lately under the guidance of CEO Satya Nadella, with much of this success coming from its cloud computing services. The firm’s cloud platform, Azure, has experienced explosive growth in recent quarters, fueled by widespread adoption from high-profile businesses, including the likes of Walmart and ExxonMobil.

Competition in this area is fierce. Amazon’s Web Services (AWS) cloud platform is still the dominant force, though Azure is quickly closing the gap amid rapid growth rates – with Google’s own cloud service not far behind. 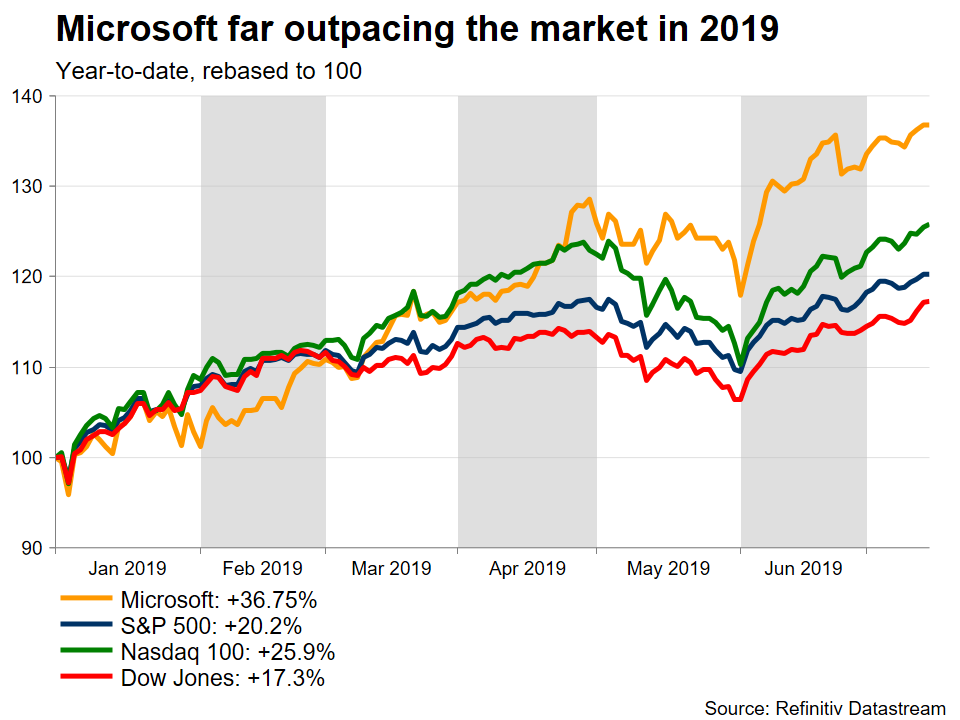 Other key business segments that investors may focus on are the subscription-based Microsoft 365 office software, the Teams application that enables easier communication among organizations, as well as its professional networking platform – LinkedIn.

But valuation is a concern

Things may not be as rosy as they seem though, because even though the stock has soared, the company’s earnings have not risen at the same pace. The result is that the stock seems somewhat ‘overvalued’. 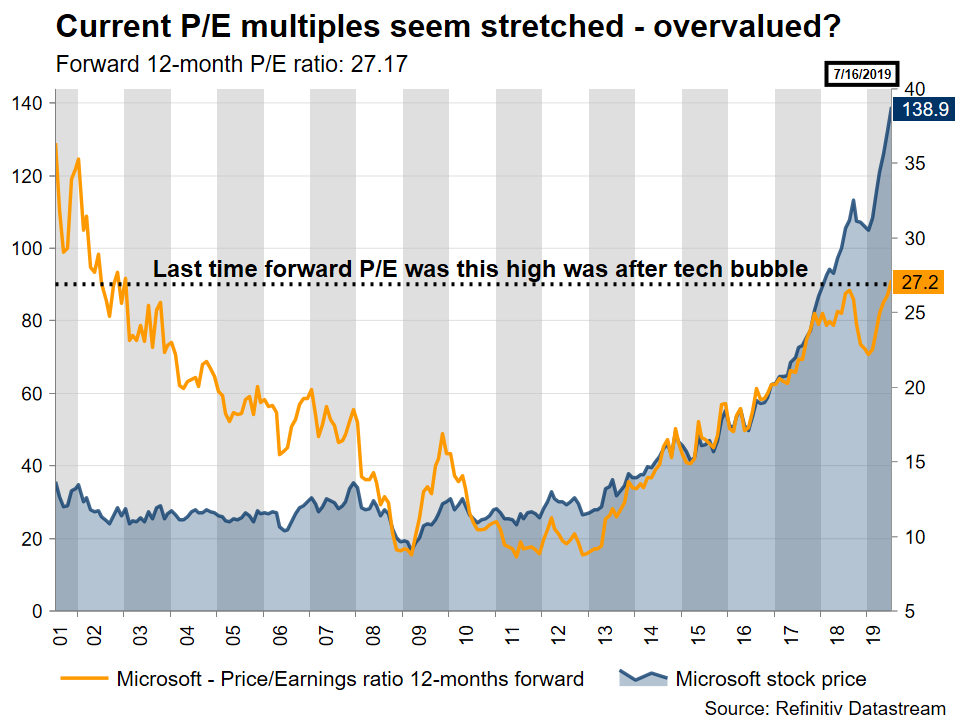 Let’s look at a common valuation metric: the 12-month forward price-to-earnings (P/E) ratio. This ratio denotes the dollar amount someone would need to invest in order to receive back one dollar of earnings and hence, the higher it is, the more “expensive” a stock is considered to be. Microsoft’s currently stands at an elevated 27.17, a level not seen since the aftermath of the tech bubble in the early 2000s.

There are two ways to interpret this. Either the stock has risen too far, too fast, and is therefore vulnerable to a pullback – or investors think that Microsoft’s future is so bright that they are willing to hold its stock even for a lower return, in anticipation of robust growth going forward.

On balance, this looks more like an ominous sign. While Microsoft is no doubt a great company, such an elevated valuation is concerning, and increases the risk of a major corrective pullback in case any piece of bad news hits the markets.

Taking a technical look at the stock, a stronger-than-expected set of earnings could push the price back towards the all-time high of 139.54. If the bulls pierce above it, that would bring the market into uncharted waters, with resistance likely to be found at psychological numbers, such as 145.00 and 150.00.

On the flipside, if the current retreat continues, support may come from 132.75, the June 25 low, with a bearish violation turning the focus to the 130.50 zone.