Microsoft will report its first fiscal quarter earnings result on Wednesday after the market close. The tech behemoth, whose share price has soared by about 36% in the year-to-date, has been benefiting from impressive growth in its cloud computing business. But competition from the likes of Amazon’s Web Services threatens to put the brakes on Microsoft’s fastest growing revenue division.

The Company has been consistently meeting or beating its earnings estimates over the last few years, and with the forecasts edging higher ahead of the earnings announcement, the risks are for another positive surprise. Microsoft reported total revenue of $29.1 billion in Q1 of 2018-19 and is projected to have achieved sales of $32.3 billion in Q1 2019-20, according to Refinitiv I/B/E/S Estimates, representing a year-on-year increase of 11.2%. However, compared to the previous quarter, revenue is estimated to have declined by 4.1%. 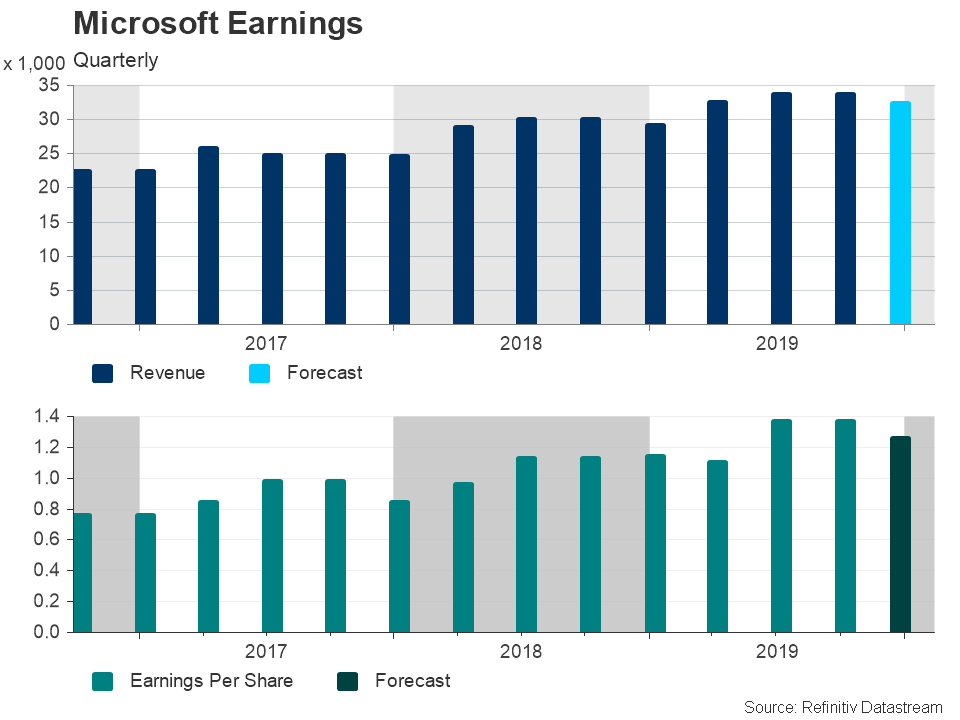 Another earnings beat could propel Microsoft’s share price to a new all-time high, having set an intra-day record of $142.37 per share on September 19. The stock is currently trading not too far from its record highs, so a positive set of results would help lift the price above the key resistance point of $142. Above this area, the next target for the bulls is likely to be the 261.8% Fibonacci extension of the September-December downleg at $152.13.

On the downside, disappointing earnings could push the price below the 50-day moving average, raising the prospect of a pullback towards the 161.8% Fibonacci extension of $129.91.

Analysts remain bullish about the Company’s stock, reiterating their ‘buy’ rating. Should the earnings results give investors little reason to be concerned about the outlook, Microsoft’s stock price is likely to continue outperforming the broader market. The Dow Jones, S&P 500 and the Nasdaq Composite are up 15.0%, 19.9%, 23.02%, respectively, year-to-date as of October 21. Microsoft is a constituent of all three indices.

The share price is also outperforming the S&P 500’s Information Technology sector, which is up by just under 32% YTD. However, it’s questionable how much further the stock can rise in the short-to-medium term as the Company’s price/earnings (PE) ratio is above that of its peers in the S&P 500 IT sector (29.16 vs 24.34), and above the average one-year historical PE of the Dow Jones, S&P 500 and the Nasdaq Composite, which currently stand at 19.07, 21.00 and 24.31, respectively.

The higher the PE ratio, the higher the Company’s share price is relative to its earnings, suggesting investors have high expectations about future earnings. However, it’s also a sign that the share price may be overvalued.

In Microsoft’s case, there’s good reason to be optimistic about its revenue outlook as income from cloud services is still growing at double digit rates. Both its Azure cloud computing platform and its Office 365 cloud-based subscription service have enjoyed incredible growth in recent quarters and that trend is expected to continue.

The Company appears to be rising to the growing challenge in the sector from rivals such as Amazon.com Inc whose Amazon Web Services business has also been growing at a rapid rate. Microsoft recently signed a $2 billion deal with AT&T for its cloud services and there’s rumours of other similarly large undisclosed deals.

Revenue from other services such as LinkedIn have been increasing at double-digit pace too. Meanwhile, the end of official support for the popular Windows 7 platform in January 2020 should accelerate the conversion to Windows 10, boosting sales of personal computers and the Windows 10 software, as well as related services.

So, despite the risks to revenue from slowing economic growth and increased regulation facing some other tech giants, Microsoft appears to be in a bit of a sweet spot and this isn’t likely to change in the upcoming quarters, as the Company, under the leadership of Satya Nadella, continues to refocus its products and services on more profitable areas.