The Nasdaq 100 index slipped back into correction territory on Monday as fears of slower iPhone sales hurt Apple shares, which in turn weighed on the wider technology sector. The latest sell-off has cut short the Nasdaq’s recovery from October’s 6-month lows and raised questions about the outlook for tech stocks going into 2019.

Up until the latest rout to hit the US stock market, the tech-heavy Nasdaq had been outperforming the other major indices on Wall Street by a wide margin. Prior to the October slump, the Nasdaq 100 index’s year-to-date gains stood at about 20%, while the Nasdaq Composite was up by around 16%. In contrast, the S&P 500 had risen by just above 9% and the Dow Jones Industrial Average lagged behind with gains of 8.5%. 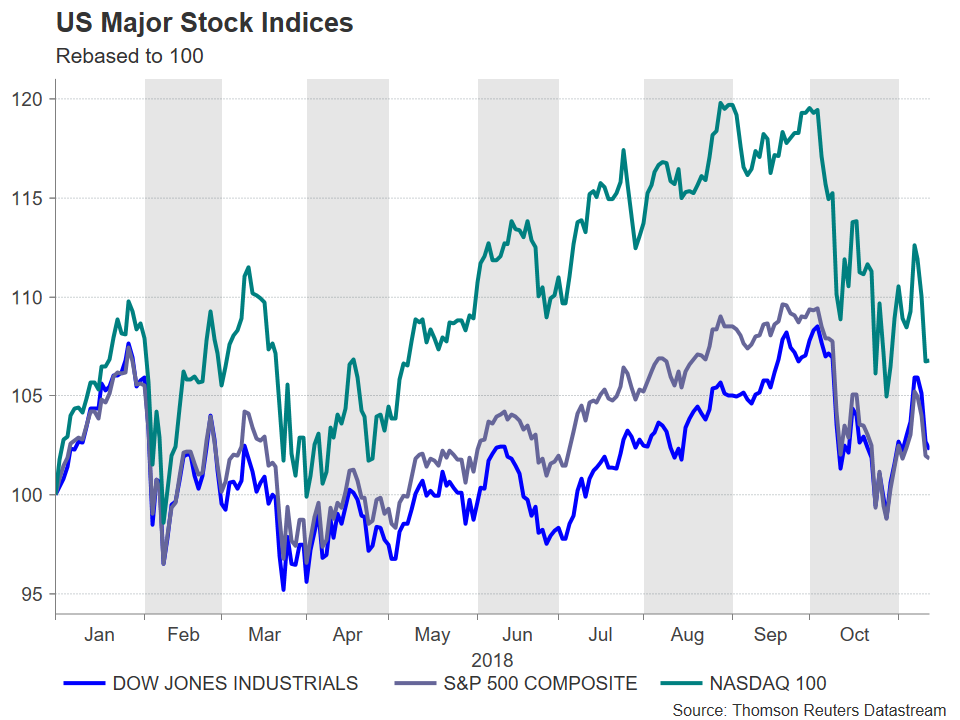 The rally of the tech sector during 2018 was led by the so-called FAANG stocks, consisting of Facebook, Apple, Amazon, Netflix and Google (Alphabet). However, it is the FAANG stocks that have been underperforming the broader tech sector since October after investors were unimpressed with their Q3 earnings results. Netflix was the exception, though ironically, its shares have suffered the most during the sell-off as the company is facing stiffer competition in the streaming industry. Apple reported solid numbers, but its results were clouded by weaker-than-expected revenue guidance for the holiday season and after it said it would stop reporting iPhones sales numbers for each quarter.

The concerns about future revenue growth were fuelled further after key Apple suppliers cut their outlook for their shipments on projections of reduced demand for iPhones. Analysts didn’t waste any time and swiftly cut their price target for Apple’s stock. The share prices of Apple’s various component suppliers globally also fell sharply, while the bleaker iPhone sales forecasts dampened the revenue outlook for other tech firms as well. Social media companies such as Facebook and Twitter are also seeing their earnings forecasts being downgraded after reporting slower user growth, which comes at a time when there is increasing regulation of the digital industry following several scandals involving personal data breaches.

The worsening picture for 2019 could weigh on tech shares for a while longer in the short- to medium-term as technical indicators for indices such as the Nasdaq 100, while being bearish, are not yet pointing to an oversold market. Company fundamentals also suggest there is room for additional losses as share prices remain less attractive in comparison to other sectors despite the heavy sell-off. The forward 12-month price/earnings (PE) ratio for the US tech sector is currently 16.5 – uncomfortably above the sector’s average of 12.9 in the rest of the world and higher than the average of the US market, according to data from Refinitiv. 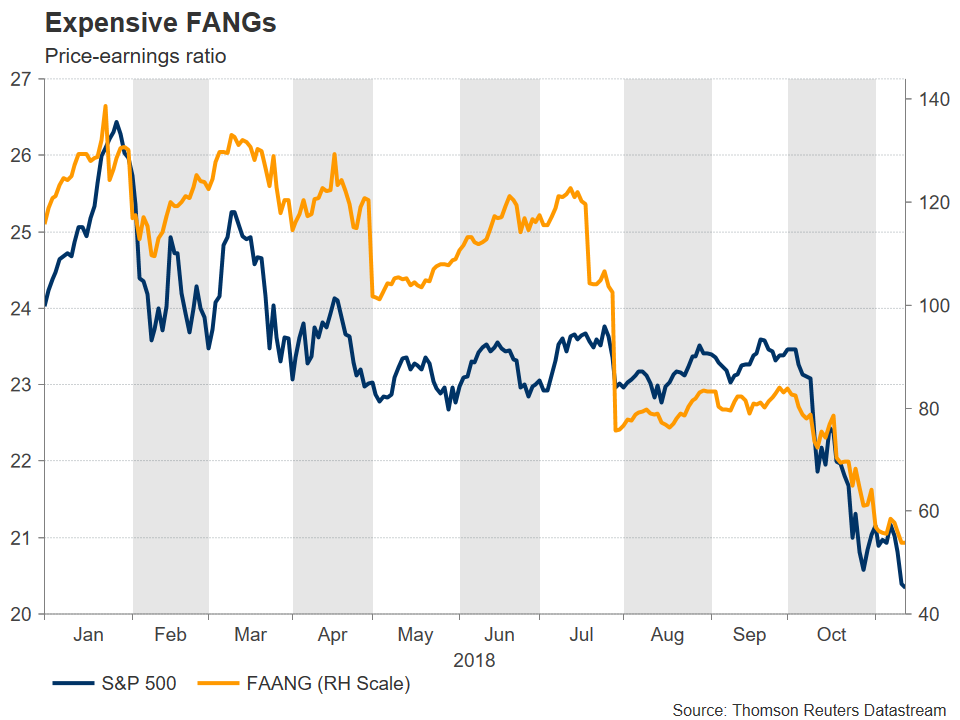 Among the FAANG companies, the overvaluation is even more evident, with the five tech giants’ average PE ratio at just under 54 versus 19.32 for the broader S&P 500 index. The Nasdaq 100’s overall PE is a little higher at 22.40, while the Dow Jones has the lowest ratio at 18.39, meaning the more traditional blue-chip stocks are less overstretched and offer better value in comparison to their tech peers.

The Nasdaq 100 index once again closed below its 50- and 200-day moving averages on Tuesday and is down 11.3% from its all-time high of 7700.56 set on October 1. If the downside move continues, the next support would likely come at the 61.8% Fibonacci retracement of the February to October upleg, which is in the 6750 area. A drop below this level would increase the bearish pressure and take the index towards the October low of 6574.75. A breach of this trough would increase the risk of the index entering a bear market, especially if it retraces the entire gains made after the January/February downtrend, as this would take the losses from the record high to 20%.

Whether the Nasdaq 100 can bounce back and resume its rally will depend on how the 2019 outlook evolves in the coming months as there are several factors that will come into play. First, the US economy is expected to slow as the effects of the Trump administration’s fiscal stimulus begin to fade. The prospect of further tax cuts are also looking less likely now that the Democrats control the House of Representatives following the midterm elections. A bigger concern for investors though is the pace of rate hikes by the Federal Reserve. Rising borrowing costs tend to have a dampening effect on both consumer and corporate spending, and if the Fed goes too far too fast, business sentiment could deteriorate dramatically.

Also worrying investors is America’s trade war with China. If the US and China fail to make any progress in resolving their trade dispute, the tariff rate on $200 billion worth of Chinese imports will automatically be raised from 10% to 25% on January 1, 2019. Additionally, President Trump has threatened to impose tariffs on all remaining imports from China. An escalation of the trade conflict would not only add to the costs for US companies but would also hurt world trade, weighing on an already weakening global economic backdrop.

Alternatively, markets are likely to cheer any positive developments in the US-China trade story and the bulls might regain control of tech stocks if the earnings slowdown proves to be much milder than anticipated.