The latest employment numbers out of New Zealand will hit the markets late on Tuesday, at 21:45 GMT. This will be among the final data releases ahead of the RBNZ’s meeting next week, where market pricing currently assigns a 55% chance for a rate cut, so it may be crucial for that decision. Assuming no major disappointment in these figures, the risks seem tilted towards the RBNZ holding its fire, which may help the kiwi extend its rebound.

Market-based expectations for another RBNZ rate cut next week diminished substantially recently, with that action now viewed as a coin toss, from being fully priced in at the start of October. The ceasefire in the US-China trade battle was pivotal, as it reduced the likelihood of any further escalation, painting a brighter picture for New Zealand’s export-oriented economy.

A string of stronger-than-expected data helped too. Inflation clocked in at 1.5% in Q3, which was a slowdown from the 1.7% in Q2, but still much higher than the 1.3% the RBNZ projected in its latest forecasts. Crucially, the domestically generated portion of inflation was especially strong, indicating that consumption remains healthy. 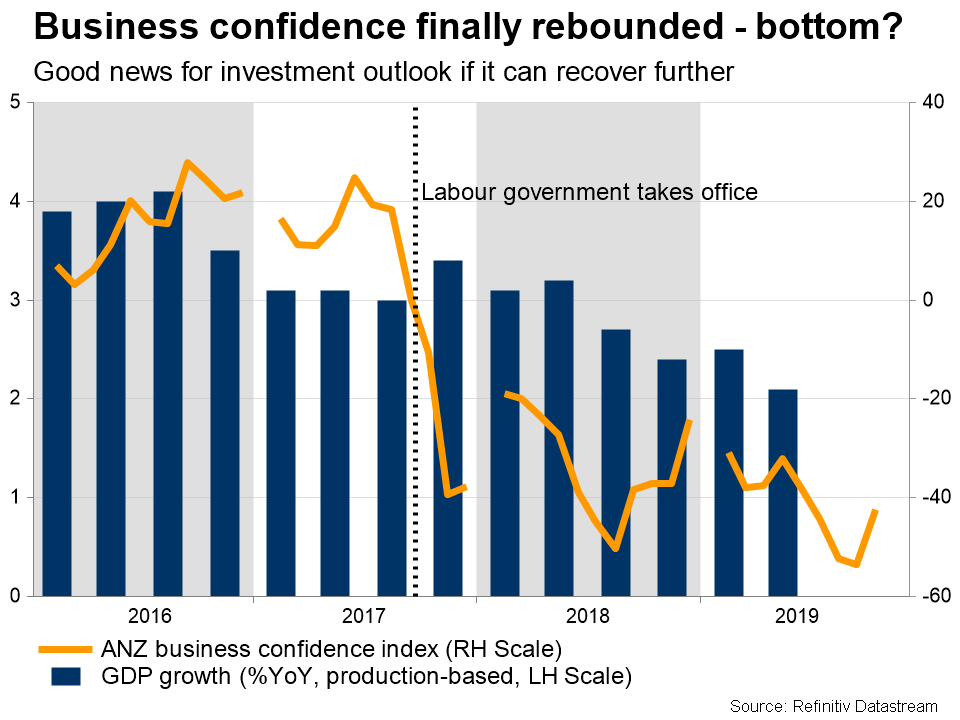 Likewise, business confidence rebounded from extremely depressed levels in October. That may be a sign that the RBNZ’s recent rate cuts are starting to pay dividends, though the trade truce surely played a large role as well. Still, it’s quite encouraging that the downtrend in business morale seems to be bottoming out finally.

Final piece of the puzzle?

With investors split over whether the RBNZ will cut this month, the upcoming jobs figures may be vital. Forecasts point to a decent report overall. The unemployment rate is expected to tick up to 4.1% in Q3, but that follows an 11-year low of 3.9% previously, so it wouldn’t be worrisome – especially given the volatile nature of this indicator. Meanwhile, wage growth is expected to have accelerated to 2.3% in annual terms, from 2.2% earlier.

Assuming no major disappointment, such prints probably wouldn’t be enough to push the RBNZ towards a rate cut. Particularly considering that the housing market has also picked up some steam as mortgage rates declined lately, and that the exchange rate is much lower than the RBNZ had envisioned – spelling good news for inflation and exports.

Inflation expectations matter the most

Finally, note that the latest survey of inflation expectations by the RBNZ will be released on November 12, a few hours before the rate decision. Make no mistake, this is the most important variable for policymakers – remember that a sudden fall in expectations caused the easing cycle in 2016 and the recent 50bp rate cut this summer. If expectations hold roughly steady, that would argue for the RBNZ to hold its fire. Otherwise, any serious weakness could see the Bank cut rates again, even if the employment data are strong.

As for the kiwi, the near-term picture looks positive. Assuming the RBNZ doesn’t cut, and that the US and China sign their ‘phase one’ trade deal, the currency could extend its latest rebound. Taking a technical look at kiwi/dollar, if the bulls manage to overcome the 0.6455 zone, the next obstacle may be the 0.6565 area.

However, the bigger outlook is not encouraging, as the ceasefire in the trade war is on thin ice. Once the phase one deal is done and the euphoria calms down, it’s doubtful whether any progress will be made in ‘phase two’ – where the thorny issues will be negotiated. The bottom line is that the excessive optimism could fade in the coming months, eventually dragging the kiwi back down.

If the bears retake control, support in kiwi/dollar may be found at the intersection of the 0.6330 level and the 50-day simple moving average (SMA), before the attention turns to 0.6240.