New Zealand will be the last of the major economies to report GDP estimates for the first quarter. The data, due at 22:45 GMT on Wednesday, will likely show the Pacific island nation recorded its first economic contraction in nine years in the first three months of 2020. Policymakers at the Reserve Bank of New Zealand will be keeping a close watch on the numbers as they ponder whether to take rates to negative territory. Although New Zealand is now largely free of the virus, the economy is not out of the woods as its strong reliance on exports means more stimulus may yet be needed.

Trade frictions between the United States and China – New Zealand’s largest trading partner – had pushed annual growth to the lowest in six years at the end of 2019 as a slowdown in global trade dragged on exports. There can be no doubt that the growth picture deteriorated even further in Q1 of this year as the coronavirus outbreak wreaked havoc across the world.

The hit on New Zealand’s economy is expected to have been notable, with GDP projected to have shrunk by 1% over the January-March period. On a yearly basis, growth is expected to have slowed to 0.3%. While those numbers may not seem as dramatic as those reported in most other advanced economies, the downturn likely deepened in the second quarter as New Zealand’s lockdown, which was only fully relaxed earlier this month, was one of the strictest among those adopted by the West. 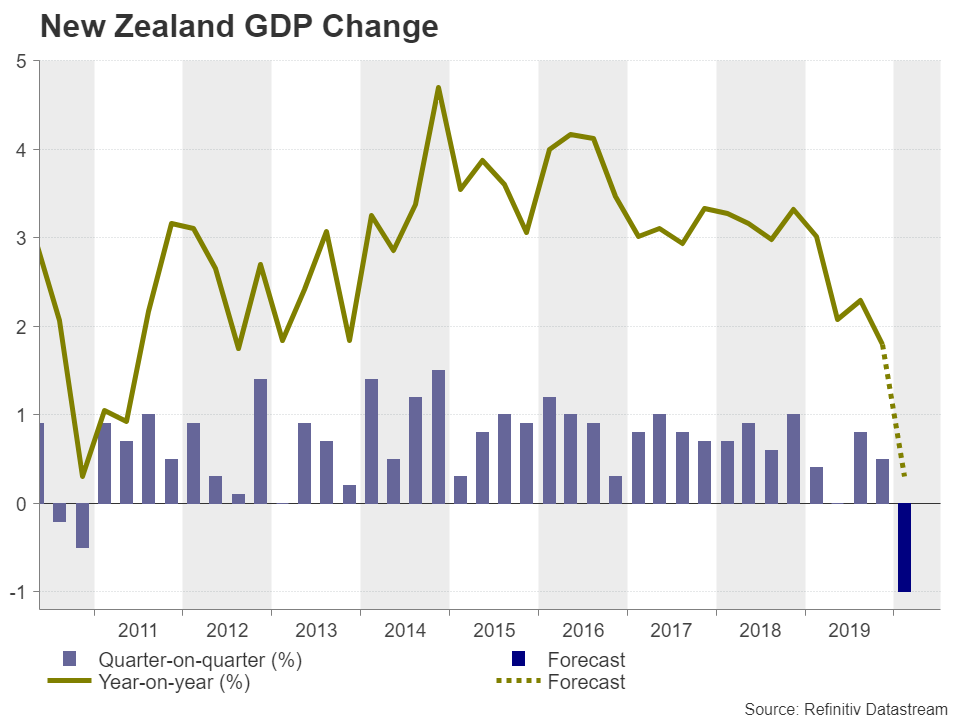 Economic woes far from over despite virus-free status

But as the country can now claim to have eradicated the disease, with new cases emerging only from repatriations, the road to recovery has not necessarily shortened. Weak growth globally and travel restrictions look set to weigh heavily on an economy that is dependent on trade in both goods and services. New Zealand’s tourism industry, in particular, has been devastated by the pandemic and that’s one area of the economy that is unlikely to recover substantially anytime soon, choking off an important source of foreign exchange earnings.

Although it’s possible the government will begin to loosen its self-imposed travel curbs as infection rates come down in more and more countries, the RBNZ may not wait very long before easing monetary policy again. The RBNZ next meets on June 24 and will probably hold off from any additional measures for the time being. But Governor Adrian Orr has already hinted that should more stimulus be required, QE would be the first choice, as the Bank has yet to make up its mind about the effectiveness of negative interest rates.

Nevertheless, even if negative rates eventually prove unnecessary, investors are convinced that it’s only a matter of time before the RBNZ cuts rates again. Interest rate futures imply there’s a more than 50% chance the cash rate will be lowered to zero by April next year.

Should the GDP data add to concerns about the country’s economic prospects, the bullish looking New Zealand dollar might struggle to get past immediate resistance around $0.6480, which is the 78.6% Fibonacci retracement of the January-March downtrend. Increased downside pressure could see the kiwi retreating to its 200-day moving average at $0.6320 and failing that, towards the 61.8% Fibonacci at $0.6263.

However, in the event there is a positive surprise in the first quarter GDP performance and expectations for further RBNZ action diminish, the kiwi would be well positioned to resume its impressive rally and challenge the key levels at $0.6575 and $0.6630.