The latest inflation numbers from New Zealand will hit the markets late on Thursday (21:45 GMT). Forecasts suggest that inflationary pressures cooled, which may be partly owed to the stronger exchange rate. Still, the domestic economy has recovered well, the virus has been eradicated, and it is looking less likely that the Reserve Bank will cut rates again. As for the kiwi, a lot will depend on global risk sentiment and commodity prices, but the overall picture still seems favorable.

New Zealand’s is reaping the economic rewards of its ‘go hard and go early’ strategy against the global pandemic. The nation has essentially defeated the virus, without even vaccinating anyone. Prime Minister Ardern enacted one of the earliest and tightest lockdowns globally, did not open New Zealand’s borders once the virus was eradicated, and enacted powerful relief programs to shield the economy.

The benefits are already visible. GDP numbers show that economic activity was already back at pre-pandemic levels in Q3 2020, turbocharged by all the fiscal and monetary stimulus. Hence, New Zealand has staged a full economic recovery, something also evident in business confidence surveys that have skyrocketed lately.

With the economy firing up and commodity prices marching higher, the Reserve Bank of New Zealand (RBNZ) announced a sharp turn in policy recently. It played down expectations for negative rates, something it had previously signaled as a strong possibility. In turn, the combination of brighter economic prospects, a less-dovish RBNZ, and the cheerful mood in global markets have been powering the kiwi’s rally in recent months.

In the final quarter of 2020, the nation’s inflation rate is forecast to have declined to 1.0%, from 1.4% in Q3. Given the spectacular recovery in domestic demand and commodities, this soft forecast likely reflects the appreciation of the kiwi and a sharp decline in food prices during the quarter. A strengthening currency can dampen the price of imports and hold overall inflation down. 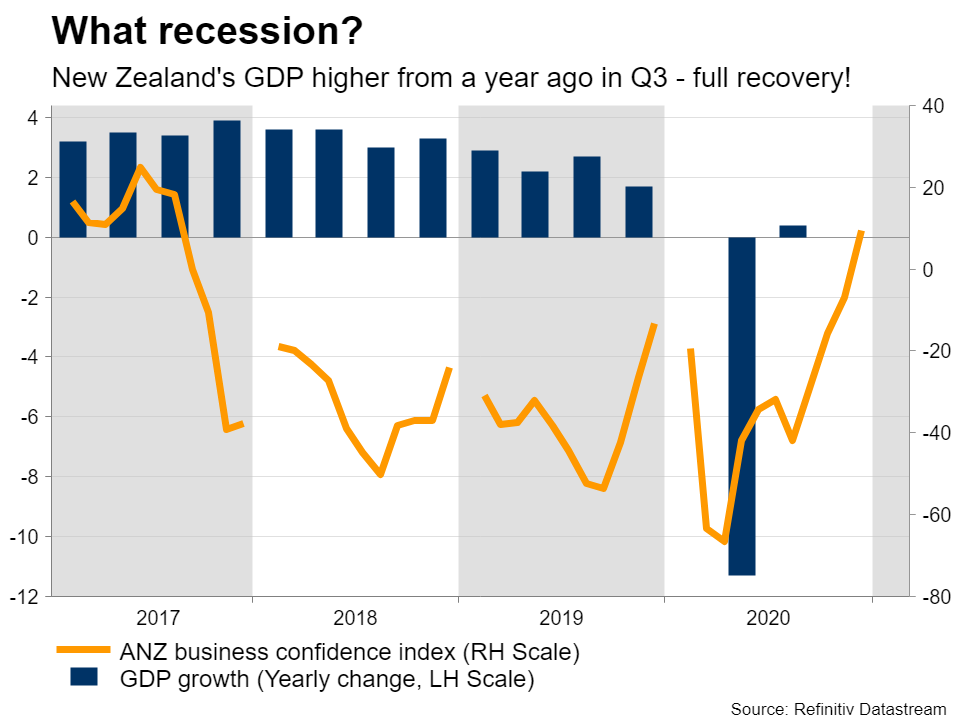 Still, even such a weak print is unlikely to reignite expectations for RBNZ rate cuts. The Bank already expected inflation to clock in at 1.1% in its latest forecasts, so this wouldn’t be any huge disappointment. Additionally, with demand recovering, global supply disruptions, rising energy prices, and market-based inflation expectations moving higher, policymakers might view any weakness in Q4 inflation as a transitory phenomenon.

Money markets are currently pricing in just a 20% probability for a quarter-point RBNZ rate cut by the end of 2021.

Kiwi is a risk sentiment play

As for the kiwi, the good domestic news is likely priced in by now, so the currency is mostly at the hands of global risk sentiment. Specifically, how well stock markets perform from here, how quickly the vaccine rollout is completed, and how much higher commodity prices go will be crucial. The final size of the US stimulus package and the path of the US dollar will also be key.

Overall, the kiwi’s outlook seems positive in an environment where most countries start lifting virus restrictions soon and the global economy heals. And with the RBNZ moving to a ‘neutral’ stance, any future gains in the kiwi may be more visible against currencies whose central banks will remain ultra-aggressive, like the euro and Swiss franc. In the case of the euro, the underlying economy is still fragile, the vaccine rollout is going slowly, and there isn’t much fiscal stimulus in the pipeline either.

Taking a technical look at euro/kiwi, if the latest retreat continues, an initial cluster of support may be found near the 1.6930 zone, with a downside break turning the focus to 1.6840.