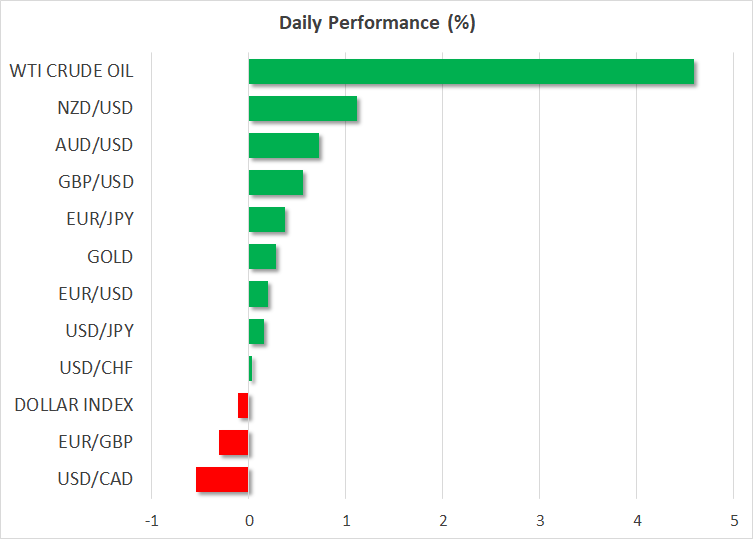 The third quarter got off to a subdued start on Monday as there was no respite for equity markets from the worsening economic landscape globally, though major currencies were able to bounce back amid a more cautious dollar and some positive headlines out of the UK. After a busy week of Fed commentary where policymakers doubled down on their 2% inflation goal, recession risks continue to dominate even as investors battle new headwinds.

One such unexpected headwind has been British finance minister Kwasi Kwarteng’s tax-cutting mini budget that was met with an unforgiving response by the markets, wiping out billions from UK assets and forcing the Bank of England to step in with emergency bond purchases. But as the Conservative party annual conference gets underway, Kwarteng and Prime Minister Liz Truss appear to be exercising some damage limitation.

Kwarteng has just announced that he is ditching his plan to abandon the top rate of income tax of 45% following a revolt by Tory MPs who threatened to vote against the budget. Although this won’t completely solve the issue of the UK’s ballooning debt, it is a step in the right direction and investors may be hoping that more U-turns are on the way.

Sterling climbed back above $1.12 on the back of the headlines, having been unable to close above the level on Friday. The Australian and New Zealand dollars were today’s other big gainers, making up for lost ground after failing to join in the euro’s and pound’s rebound last week.

But the euro hit a stumbling block following stronger-than-expected inflation data on Friday. The Eurozone’s headline rate of inflation hit a new record high of 10.0% in the September flash estimate, adding to fears that the European Central Bank will have to hike rates even more aggressively. With the war in Ukraine still raging, Russian gas supplies continuing to fall and inflation proving stickier than anticipated, a recession seems almost certain in Europe.

Nevertheless, after coming under pressure from the data, the euro has managed to claw its way back above the $0.98 handle on Monday and it was the yen that was having a hard time.

The dollar, while flat against a basket of currencies, is attempting to push its way above 145 yen as a disappointing Tankan survey weighed on Japan’s economic outlook. The latest brush with the level that prompts the Bank of Japan to intervene comes despite fresh warnings by Japan’s finance minister on the yen’s weakness and some signs of a policy shift by the BoJ. In the Summary of Opinions of the September meeting, some policymakers appeared to be calling for an exit strategy out of stimulus amid concerns that inflation may significantly overshoot the Bank’s projections.

The fact that the yen is struggling so much on a day where the dollar is generally softer doesn’t bode well for the Japanese currency. The dollar seems to have taken to the sidelines today ahead of the IMS manufacturing PMI due later in the US session, while there’s likely to be some caution as well about Friday’s jobs report, which will be the last before the November FOMC meeting.

Pain not over yet for stocks

In equity markets, US stock futures were swinging between losses and gains after Wall Street posted its third straight quarter of declines. Some investors might have been encouraged by comments from the Fed’s second in command on Friday after Brainard seemingly put a bit more emphasis on the downside risks than her colleagues, though the overall message was the same.

This could be lending some support to US equities but the mood in Europe was decisively negative today, with the major bourses declining by about 1%. Worries about the imminent collapse of Credit Suisse – Switzerland’s second largest bank and one of the largest in the world – dogged European markets. Credit Suisse shares were last quoted down more than 9% on fears that the bank may struggle to raise the capital it needs to stay afloat.

In Asia, Chinese markets are closed for Golden Week and will not be trading this week, while shares in Sydney hit a 3½-month low ahead of the RBA’s policy decision early on Tuesday.