Week Ahead – Inflation data may keep pound in the firing line, China GDP on tap

Inflation will dominate the market theme again in the coming week as, after the United States, it will be the turn of others to face their inflation demons. With the risk of recession growing by the day but not a lot changing with the inflation dynamics, UK CPI figures will attract the most attention, while a modest pickup in Japan is unlikely to spur any policy shifts at the Bank of Japan. China will also come under the spotlight as it releases GDP estimates for the third quarter and its leaders convene for the National Congress of the Communist Party.Pound battles soaring inflation and budget mess

The pound has been rocked to its core by the recent loss of investor confidence in the UK government’s macroeconomic policy credentials. The Bank of England’s intervention to address the distress in the gilts market threw a much-needed lifeline to the currency but that support is set to end on October 14. Hence, come Monday, there is a very big risk that bond yields could surge again should investors decide to dump UK bonds and other assets. Without BoE support, a sharp jump in gilt yields could trigger a collapse in pension and other liability-driven investment funds. Although it’s unlikely that the Bank would allow this to happen, any fresh turmoil would again undermine sterling.

Even if the week gets off to a calm start, there could be trouble for the pound on Wednesday when the latest CPI numbers are due. UK inflation moderated slightly to 9.9% y/y in August but is forecast to edge back up to 10.1% in September. The core rate is also expected to rise again to 6.4% y/y. 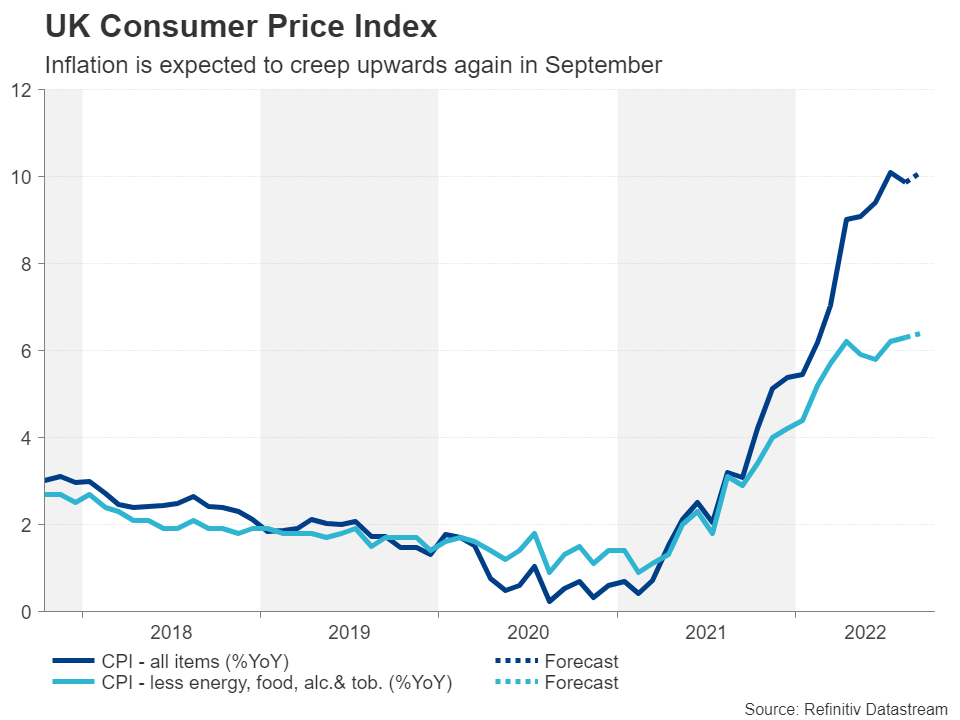 However, whether inflation is a few percentage points above or below the forecasts, it won’t change the overall picture that consumer prices are expected to continue rising well above the Bank of England’s 2% target over the next year as the risks are to the upside. Energy bills are set to go up in October and the pound’s recent devaluation is certain to push up import costs.

The BoE will probably ramp up the pace of its rate hikes in November but no amount of catchup to the Fed will be able to offer meaningful support to sterling when the economic outlook for Britain is so much gloomier than America’s – something that has been exacerbated by Prime Minister Liz Truss’s dangerous economic policies.

Friday’s retail sales data for September are not anticipated to inject much optimism either. But there are increasing signs that Truss is about to abandon the most reckless parts of the tax cuts announced in the mini budget after sacking Chancellor Kwasi Kwarteng. This would help restore some confidence in the UK’s finances and stabilize the pound.

Another country where there’s been a marked deterioration in the outlook lately is China. Nevertheless, with fewer large-scale lockdowns in the September quarter compared to the prior three months and a rebound in consumption, GDP is expected to have expanded by 3.5% over the quarter, while year-on-year growth is projected at 3.4%. 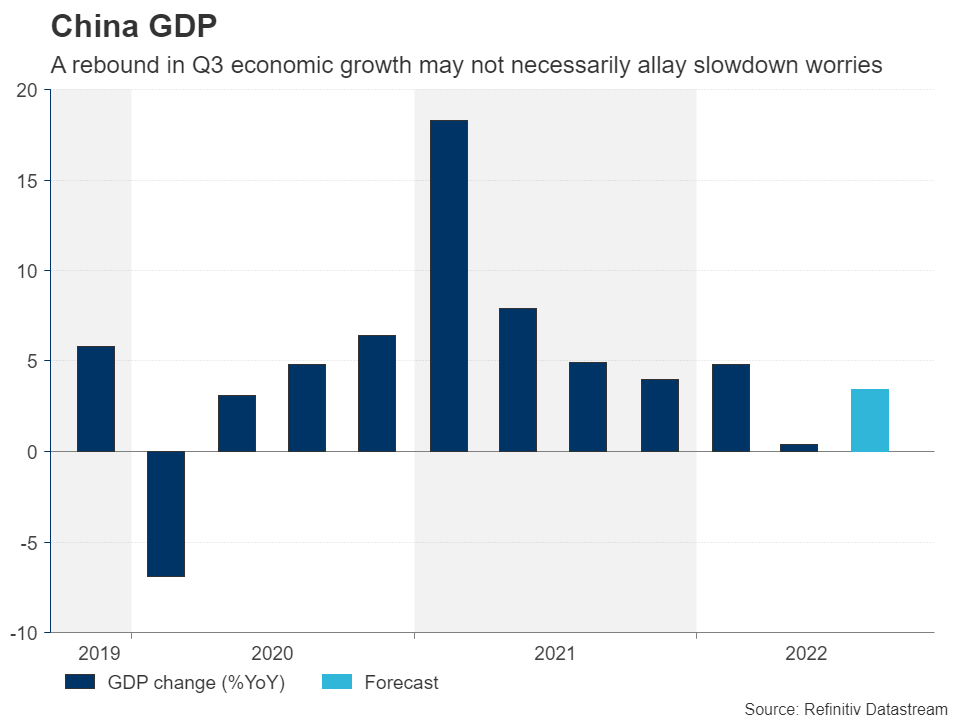 Other data that will be released alongside the GDP numbers on Tuesday are the monthly readings on industrial production and retail sales. An overall upbeat set of figures might help ease concerns about a worsening slowdown in the world’s second largest economy, but only marginally.

Investors worry that the government is not doing enough to tackle the deepening property crisis, while its zero-Covid policy is causing widespread business disruptions across the country, as well as constraining consumer spending.

There were some hopes that President Xi Jinping would have a rethink about this zero-tolerance approach once he secures a rare third term as general secretary of the Communist party, and in effect, as the country’s leader. But those hopes have now been dashed in state media.

China’s Communist Party starts its once-every-five-years national congress on Sunday where Xi is expected to be confirmed for a third term. But whilst there’s not going to be any changes at the top, investors will be keeping an eye on who will be joining the economic team for clues on any shifts in the policy direction amid the many headwinds facing the global economy right now.

Positive headlines out of China might help the Australian dollar break its losing streak. The aussie has been plumbing fresh two-and-a-half year lows versus the US dollar on concerns about China and the impact of slowing demand globally on commodity prices. If risk appetite remains dampened over the next few days, the aussie’s best chance for some reprieve might come from Thursday’s employment report. 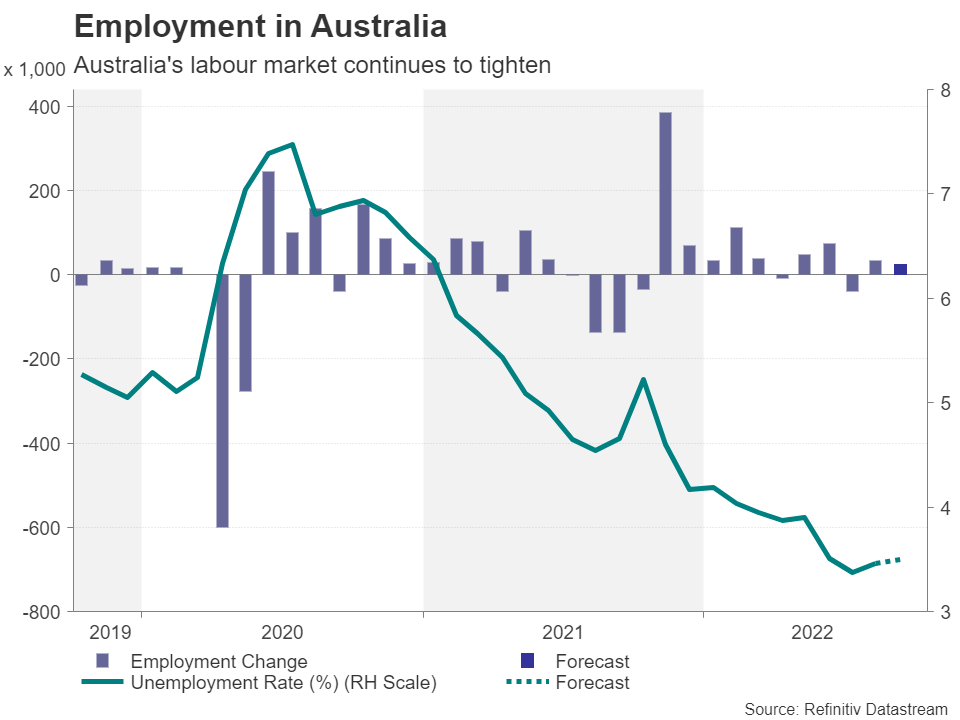 Another factor contributing to the aussie’s selloff is the Reserve Bank of Australia’s recent dovish tilt, which comes despite relatively healthier economic fundamentals than most of Australia’s peers. The RBA decided to go into lower gear at its last meeting, switching to 25-basis-point rate increases. Should the incoming data cast doubt on the need to slow the pace of tightening, the aussie would be in line for some gains.

The New Zealand dollar is fast approaching its virus crisis lows of March 2020 and several 50-bps hikes by the Reserve Bank of New Zealand have only gone so far in taking the pressure off. Tuesday’s quarterly CPI readings might not do the kiwi any favours, however, as the year-on-year rate is expected to moderate from 7.3% to 6.6%, potentially raising speculation that the RBNZ could soon join the slow lane like the RBA. 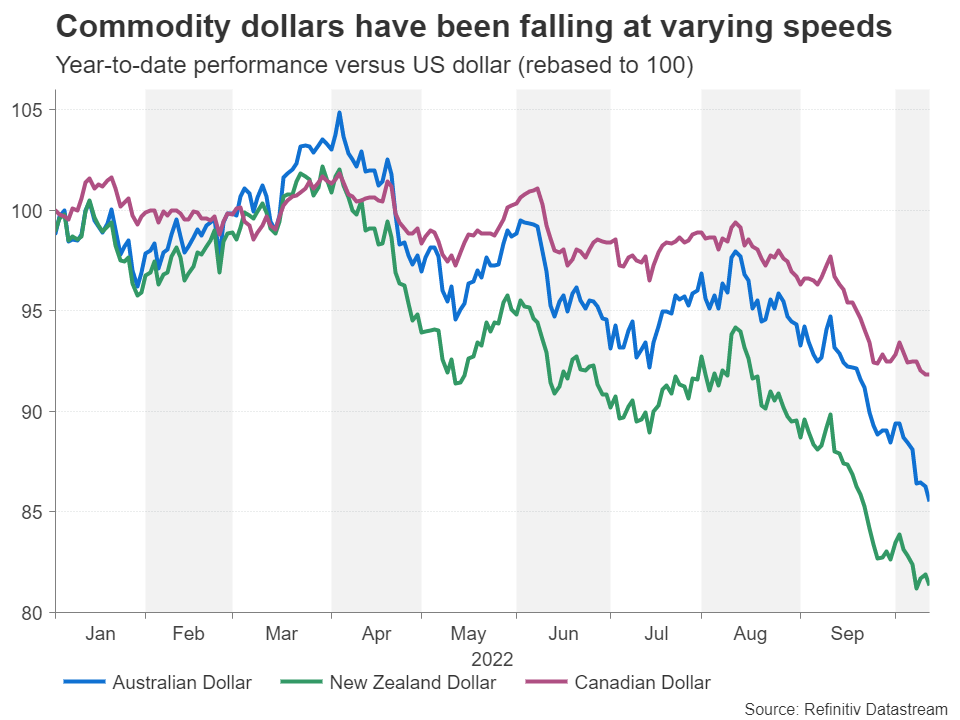 The Canadian dollar has not been immune either to the greenback’s turbocharged rally of the past month, with the rebound in oil prices providing only minimal support. Still, the loonie remains one of the better performing currencies of 2022 thanks to a very hawkish Bank of Canada. Next week’s September CPI print on Wednesday and retail sales numbers on Friday probably won’t have a huge bearing on the near-term policy stance. Although, the loonie may benefit from stronger-than-expected inflation figures if there is some softness in the US dollar.

In Japan, inflation will also be the focal point, with the September data due on Friday. The core CPI rate, which unusually only excludes fresh food prices but includes energy and is the measure targeted by the Bank of Japan for its inflation goal, has been steadily rising this year. But at 2.8% y/y, it’s still far below the rate of other countries and not high enough in the BoJ’s eyes to spur wage growth. Nonetheless, any upside surprises to the expected 3.0% could provide policymakers the excuse to start planning for their exit strategy out of stimulus. Yet, the yen is likely to stay under pressure until there is an official signal and traders will be on alert for any further intervention by the Bank to defend its currency. 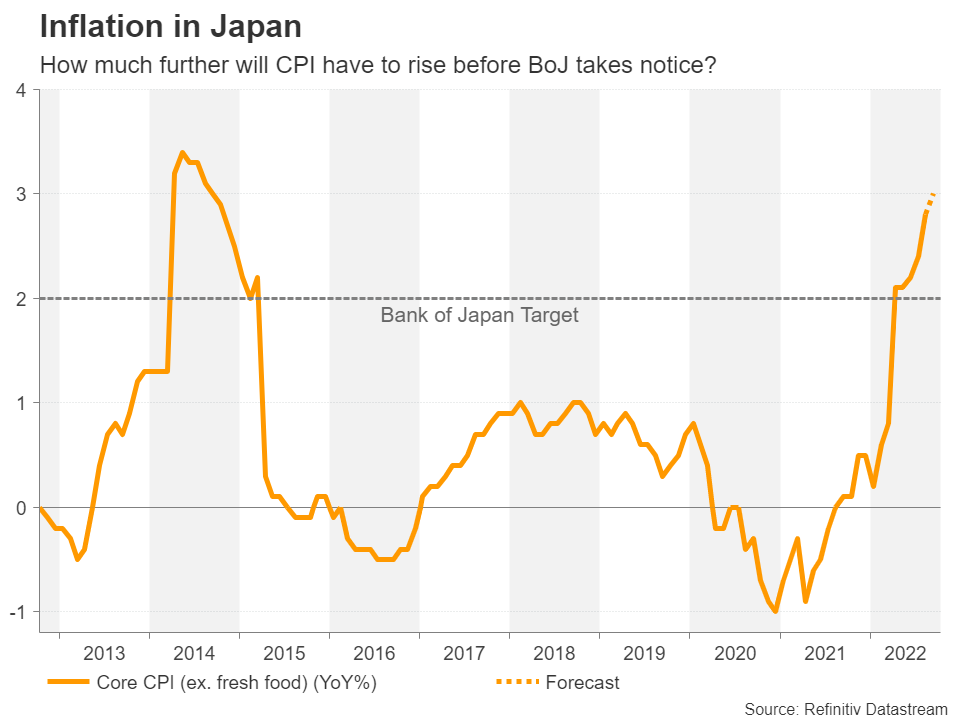 Earnings will be eyed in the US more than the data

Over in the United States, it will be somewhat of a quieter week following another red-hot inflation report. The Empire State manufacturing index by the New York Fed is out on Monday, followed by industrial production data on Tuesday. Building permits and housing starts are due Wednesday. Existing home sales will round up the housing stats on Thursday, alongside the Philly Fed’s manufacturing gauge.

In the absence of any cooling off in prices, economic growth indicators are unlikely to temper rate hike bets as many now see it as inevitable that the Fed will be forced to tighten into a recession. However, there’s still a chance markets might cheer up if the Q3 earnings season, which just kicked off, isn’t as disastrous as feared, especially if the likes of Netflix and Tesla report encouraging results. An earnings-led improvement in risk sentiment could spark a rebound on Wall Street but would probably be negative for the dollar.