The antipodean central banks will kick off the new month with their October policy decisions, but the latest jobs report out of the US could steal the limelight amid the never-ending anticipation of when the Fed will reach peak hawkishness. Following the latest panic in the markets and the renewed rush to buy US dollars, the reserve banks of Australia and New Zealand might be more inclined to maintain their aggressive pace of tightening and not ease up just yet. The dollar’s latest rampage has left few survivors and so investors will probably be hoping for a soft jobs print this time to stop the bleeding in non-dollar assets.  A strong NFP might not be desirable

After the recent turmoil over worries about the UK economy and recession risks in general as central banks are expected to keep hiking rates for the foreseeable future, the upcoming nonfarm payrolls report might prove to be a welcome distraction for traders.

Before that, though, the ISM manufacturing and non-manufacturing PMIs, due on Monday and Wednesday respectively, will be watched in the United States. Despite three consecutive quarter-point rate increases by the Fed, the American economy is showing no signs of material damage. Even though there’s been some discrepancy between the various business surveys, the ISM PMIs have held up relatively well.

If that remains the case in September as well, it would cement market bets for another 75-bps rise in November. But for the Fed, a more important criterion is the labour market. As long as both inflation and the labour market stay hot, the Fed will see no reason to slow down the pace of tightening. Friday’s jobs report will therefore be one of the most crucial deciding factors before the November decision. 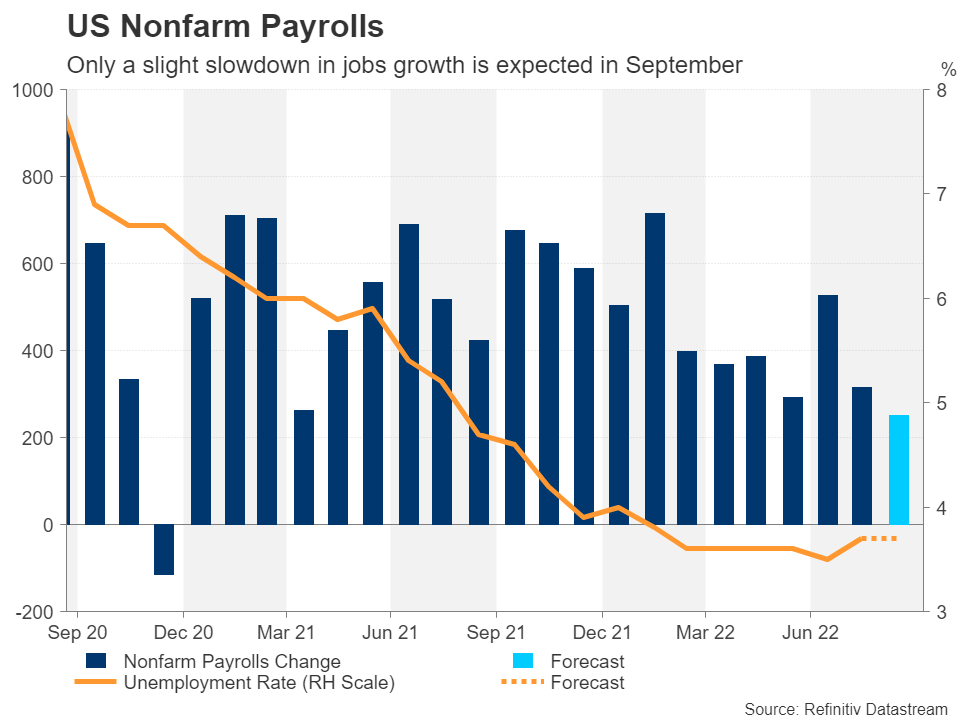 The consensus expectations are for nonfarm payrolls to have increased by a somewhat more moderate pace of 250k in September compared to the prior month’s figure of 315k. The jobless rate is projected to be unchanged at 3.7%, while average hourly earnings are forecast to have risen by 0.3% month-on-month in September.

Although a strong labour market is essential in maintaining confidence in the economy, investors would probably welcome a slight cooling down at this point as this could pave the way for the Fed to move into lower gear, potentially putting a break on the dollar’s advances.

On the other hand, another solid report risks worsening the rout in bond and equity markets as bets of a more aggressive Fed would be ramped up, further boosting the greenback.

RBA might begin to take foot off the brake

The Reserve Bank of Australia is widely expected to hike interest rates on Tuesday but after four straight increases of 50 basis points, many are speculating that policymakers will opt for a smaller 25-bps increment in October. 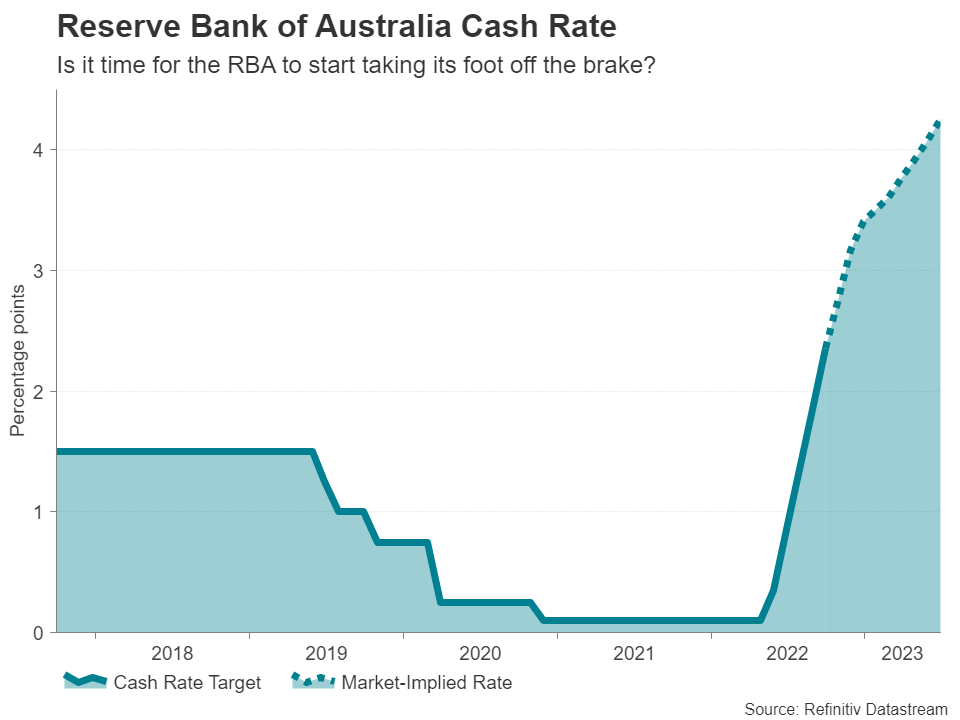 Governor Phillip Lowe previously signalled that the Bank is getting closer to the point that it will not need to keep hiking by 50 bps but just how close will likely be determined at the meeting. When considering how much the RBA has already tightened and that it meets more regularly than other central banks, a 25-bps increase seems sensible. However, following the turmoil in the markets and the recent acceleration of the Australian dollar’s slide, policymakers may want to hold off from signalling any let up in the fight against inflation.

Nevertheless, a slower pace is only a matter of time for the RBA so even if it were to raise rates by 50 bps, this may not necessarily provide much of a lift to the aussie and the currency will stay hostage to the risk mood in the markets.

On Wednesday, it will be the turn of the Reserve Bank of New Zealand to announce its policy decision. Investors expect the RBNZ to raise the cash rate by 50 bps, maintaining the same pace as the last four meetings. However, they’ve priced in about 20% probability of a 75-bps hike, which seems unlikely considering that rates in New Zealand are already among one of the highest in the major advanced economies. But more significantly, Governor Adrian Orr recently remarked that the tightening cycle is “very mature”, although he did also stress that there is still some work to do. 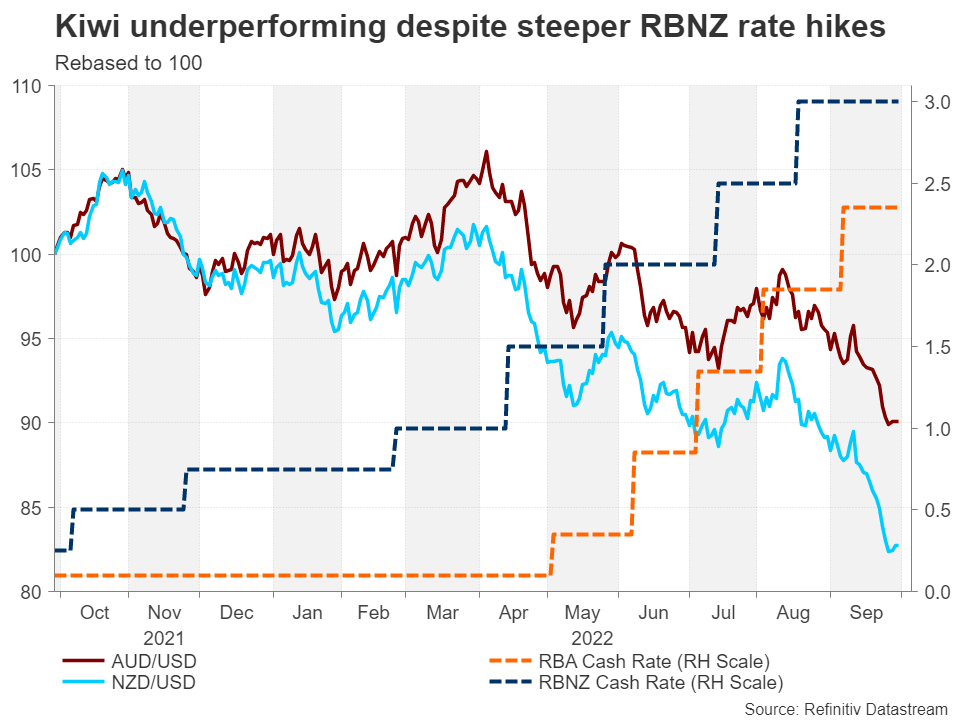 At the last meeting, the RBNZ upped its forecast of the terminal rate to 4.1%, suggesting there’s another 100-125bps of rate hikes to go by the middle of 2023. It’s possible the dramatic fall of the New Zealand dollar will prompt policymakers to favour a bigger 75 bps, but that could risk a further slump in the country’s housing market where the post-pandemic bubble appears to have burst.

Will there be a bounce back in Canadian jobs?

Sticking with the commodity-linked currencies, the highlight for the Canadian dollar will be Friday’s employment numbers. The Bank of Canada will probably find itself in a similar predicament as the RBA and RBNZ when it meets in just under a months’ time, and the October employment report will be watched for clues on the size of the rate hike.

Canada’s economy has been losing jobs for the past three months, contrary to expectations, so another disappointing reading in September could raise the odds of a smaller 25-bps rate increase at the next meeting. But even then, the consensus would probably remain at 50 bps as there’s been no shift in the hawkish tone coming out of the Bank of Canada. Hence, the data is not expected to stir much reaction in the loonie.

Euro and pound on shaky ground

Both the euro and pound are rebounding from the fresh lows brushed over the last week, with the latter plummeting to record levels versus the US dollar. But in the absence of major drivers in the coming week, their recovery is at risk of running out of steam. 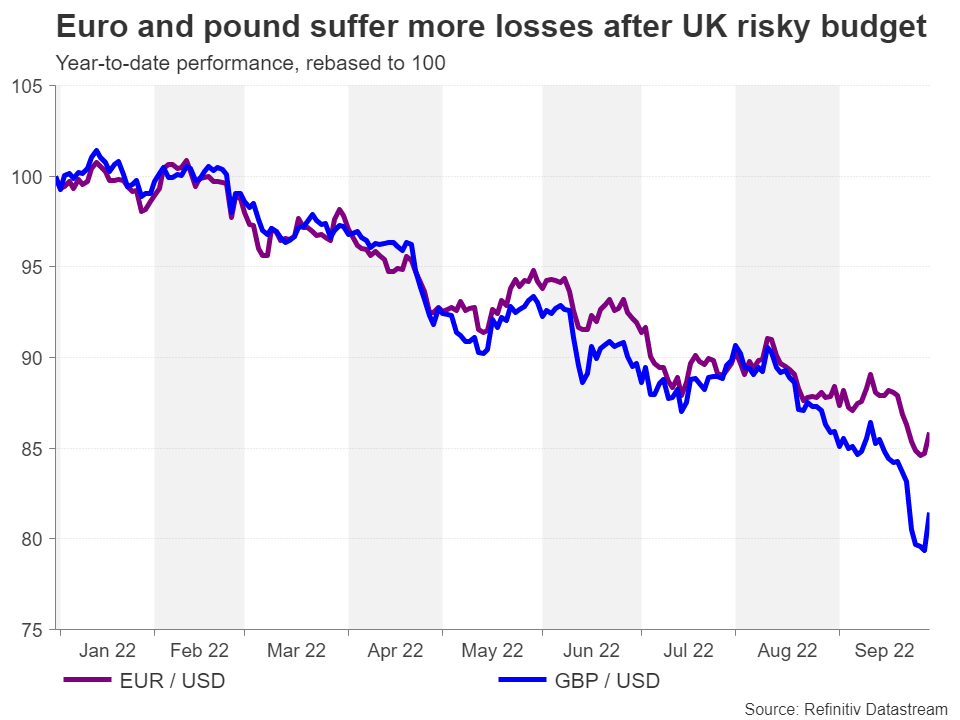 On the continent, traders will probably be focusing on the minutes of the European Central Bank’s September policy meeting on Thursday for any hints on the rate path. The ECB looks set to repeat the 75-bps hike in October but investors will try to gauge the appetite for further large moves beyond the next meeting.

In the UK, the economic agenda is extremely light but the headlines around the government’s disastrous budget will keep flowing in. The Bank of England has managed to restore some calm in the markets with its emergency scheme for purchasing long-dated bonds, but the situation remains fragile. If there is a return of volatility, further intervention by the BoE cannot be ruled out and the next one could come in the form of an unscheduled rate hike.

Either way, the euro and pound are far from being out of the woods as far as their downfall is concerned, amid persisting worries about energy rationing this winter.

The OPEC+ alliance will hold its monthly meeting on Wednesday and there is talk that the major producers will decide to slash output again. However, it’s likely that the cut this time will be a lot bigger than the symbolic 100k barrels per day agreed in September, with Russia proposing a reduction of 1 million bpd. 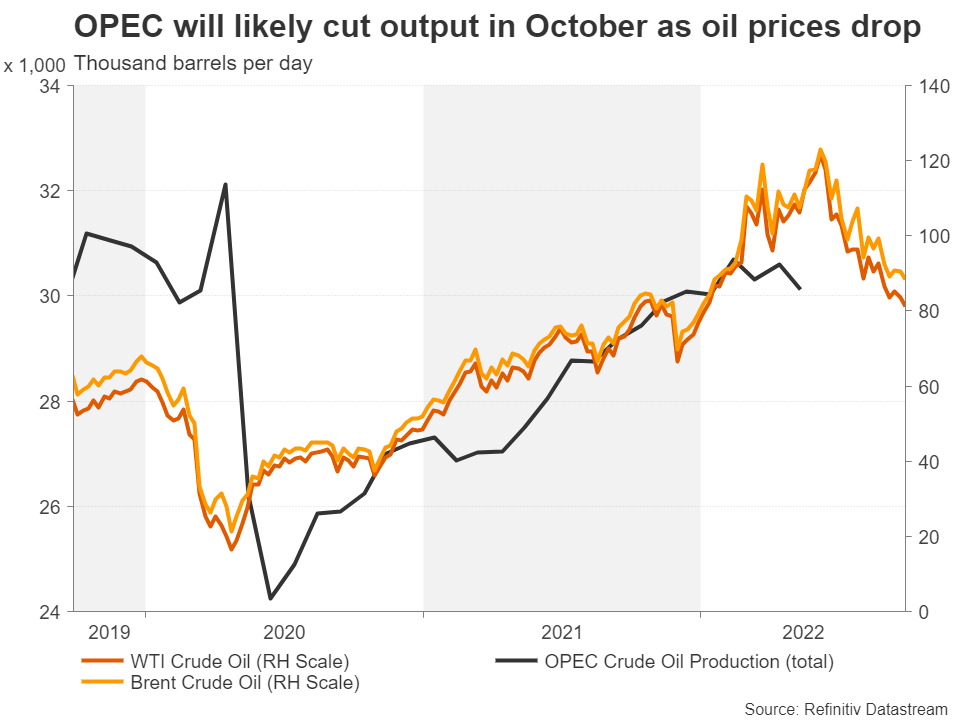 Oil has been in a steady downward trajectory since June and a greater-than-expected cut in production could push prices above this bearish channel. It would also weigh on broader risk sentiment as one of the few positives for investors lately has been the fact that energy prices have been coming down.