The graphics chipmaker, Nvida Corp, will report its earnings result for the fourth quarter of 2019 on Thursday after the US market close. After seeing revenue plummet in 2018/2019, analysts are confident Nvida will announce its first annual growth in a year on Thursday. Despite the poor earnings run, however, the company’s stock price has almost fully recovered from the initial slump in late 2018 and has been outperforming the broader market since the start of 2019. 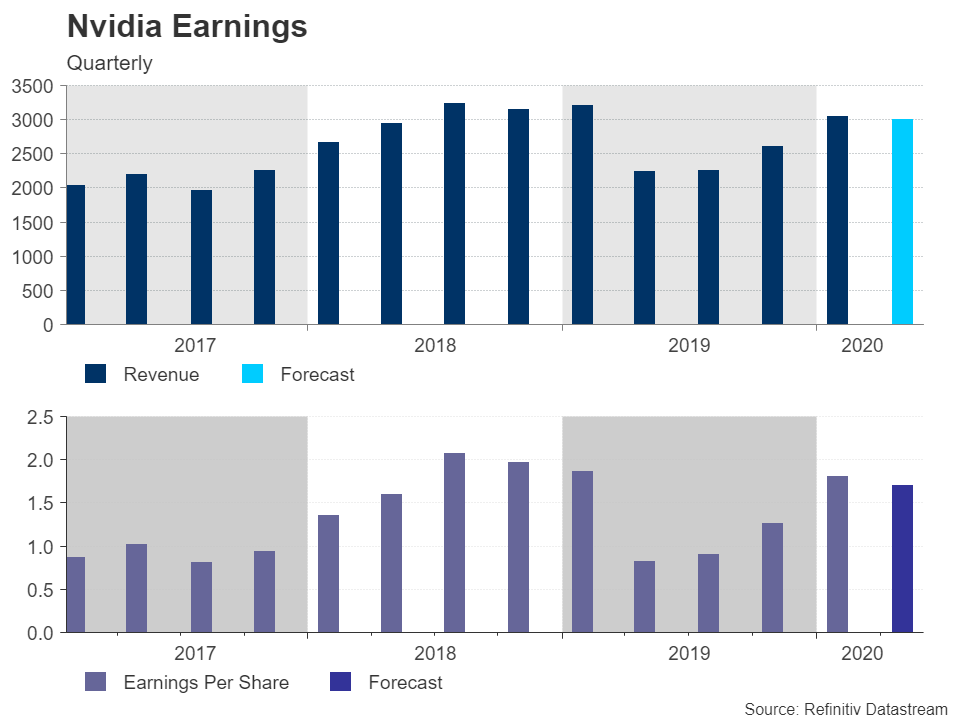 Nvidia is expected to announce revenue of $2.98 billion for the final three months of 2019 according to Refinitiv I/B/E/S Estimates. This would represent a jump of 35.1% from the fourth quarter of 2018 – the first annual growth in four quarters. Earnings per share (EPS) are forecast at $1.68 in Q4 – a 110% increase over the year but down 5.6% from the previous quarter. Rising gross profit margins should provide further evidence of higher profitability for the company; they are estimated to have increased to 64.5% in Q4 – an improvement of 8.5% from Q4 2018.

If the above estimates are met or beaten, it would mark a turnaround in the fortunes of the company, which shocked markets when it missed its Q3 earnings and Q4 guidance forecasts by a big margin in November 2018. Nvidia’s stock price subsequently tumbled by about 37%, having already been on the slide, as the slowing Chinese economy at the time led investors to downgrade their sales forecasts for the company’s products. 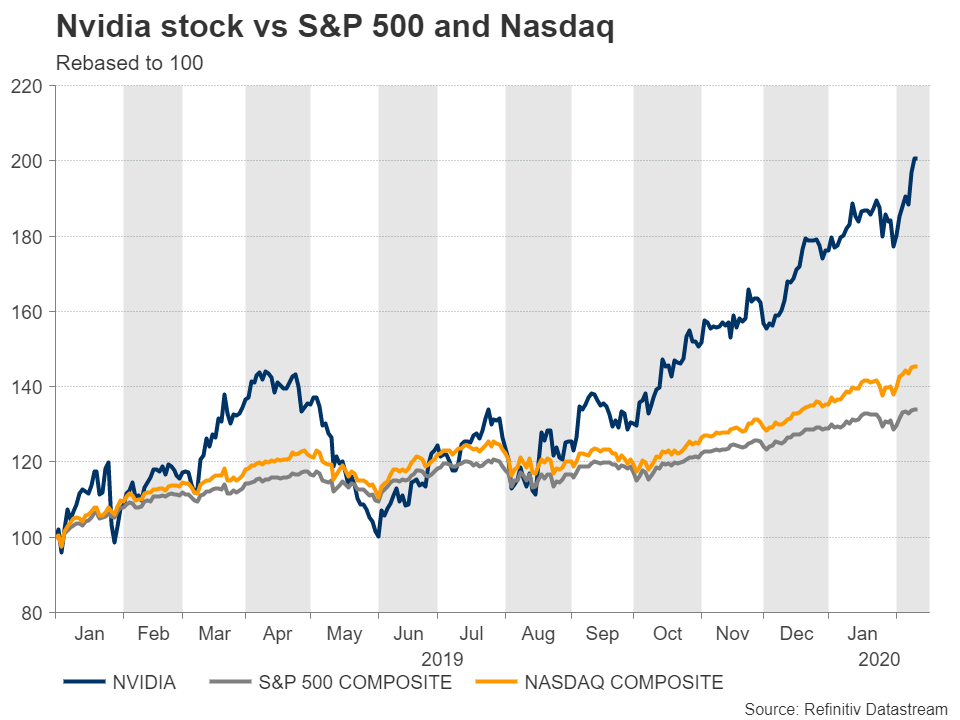 Strong performance across the business

However, it didn’t take long for the outlook to brighten and Nvidia shares have been rallying strongly since early 2019. Revenue is thought to have increased across all of the company’s business units that include gaming, data centre and artificial intelligence. Rivals such as Intel and AMD have already reported higher sales in their data centre businesses, indicating a recovery in the segment for Nvidia as well.

Gaming is thought to have had a strong quarter too, though looking at the current quarter, revenue may be weaker due to the coronavirus, which will probably negatively impact demand from China. On the other hand, Nvidia could benefit at the expense of other chipmakers like Qualcomm, Micron and Broadcom, which are much more heavily exposed to China and therefore their sales are likely to take a bigger hit from the virus outbreak.

No change in ‘buy’ rating

Investors are also optimistic about the company’s plans for the future such as the integration of ray tracing technology in its graphics cards and its foray into game streaming services. Analysts seem to agree as they have maintained their mean ‘buy’ recommendation for the company’s stock.

However, given the stock’s current overbought status, a downside correction is possible if the earnings announcement underwhelms or the company warns of a possible hit from the coronavirus. A sell-off could see the share price initially seek support at the January swing-high of $259.50. Breaching this level could open the way towards the 50-period moving average at $249, before heading for the January trough at $232.23.

Nvidia’s trailing (last 12-month) price/earnings (PE) ratio is already flashing warning signs, which at 75.88 is well above that of its constituent indices – the S&P 500 (23.62) and the Nasdaq Composite (27.61). Although the forward PE ratio does not look quite so overvalued at 35.66, it is higher than the average of 24.76 for its peers. This puts the focus on the company’s guidance for the coming quarters as well as on the overall outlook for the chip sector to gauge the sustainability of the latest uptrend.