Expectations that high inflation is here to stay continued to firm in the bond markets, sending global bond yields to fresh highs in the last 24 hours. With energy and metal prices still soaring, supply chains crumbling and wage pressures building up, investors appear to be more attuned than policymakers to the prospect that this inflationary episode may not be transitory.

Australian and New Zealand sovereign bond yields have seen the sharpest gains in recent days following the much stronger-than-expected CPI numbers out of New Zealand on Monday.

UK yields are also having a solid week and slightly disappointing British inflation data do not seem to have dented expectations that the Bank of England will hike rates at its next meeting in November. Inflation in the UK dipped slightly to 3.1% year-on-year in September but there is little doubt that it will climb further in the coming months.

The BoE will likely follow in the RBNZ’s footsteps, while the RBNZ itself might opt for a more aggressive 50 basis points increase in the cash rate next month. The Bank of Canada could also turn more hawkish as Canadian inflation figures due later today are expected to show annual CPI accelerating to 4.3%.

However, investors are at odds as to how soon the US Federal Reserve will take the plunge. Fed Governor Christopher Waller hinted on Tuesday that a rate hike in 2022 might be warranted “if monthly prints of inflation continue to run high”. Anxiety about persistently high inflation will likely be echoed by other Fed officials as a number of them are due to speak later today, including Evans, Bostic, Quarles and Bullard.

Nevertheless, markets think the Fed is in a better position to stall before hiking rates than other central banks as the risk of permanently high inflation is greater in countries in Europe and Asia that rely hugely on energy imports.

The yield on 2-year Treasury notes retreated further today from Monday’s peak of 0.448%. However, the 10-year yield scaled a five-month high of 1.673%.

Dollar surges against yen but can’t keep down commodity currencies

In the currency markets, yield differentials were in the driving seat as the bump up in US 10-year yields propelled the US dollar to a fresh four-year high of 114.69 against the Japanese yen. The euro came under slight pressure too as Eurozone yields, while also on the rise, couldn’t keep up with US yields.

The single currency eased to around $1.1625, having hit a high of $1.1669 yesterday. Sterling lost some steam too, falling back below $1.38 after cracking above the level for the first time in a month on Tuesday.

However, the commodity-linked currencies extended their gains versus the greenback, with the kiwi once again outperforming its peers to hit a four-month top of $0.7179. The ongoing rally in the price of key commodities is underscoring the somewhat more positive outlook for the economies of Australia, Canada and New Zealand compared to the UK and Eurozone where supply disruptions and the energy surge are proving to be more detrimental, thus, any policy tightening in Europe is likely to be less aggressive in the medium term.

There was a similarly mixed picture in equity markets on Wednesday as stocks in Asia and Europe drifted in both directions. Wall Street enjoyed its fifth straight positive day on Tuesday, with the leading indices closing in on their all-time highs, as all the indications are that it will be another stellar season for earnings.

Netflix reported better-than-expected subscriber numbers and Tesla is the next big tech firm to reveal its Q3 earnings after today’s market close.

However, e-mini futures for the S&P 500 were struggling in European trading, slipping in and out of positive territory. Even without any major earnings misses or negative guidance by the companies that will report before Wall Street’s closing bell, some modest profit taking is still possible following the latest bullish run.

But equity traders should also keep an eye on any volatility in bond markets over the next few days as well as on the happenings on Capitol Hill. Democrats are reportedly inching closer to agreeing on the size and details of President Biden’s spending agenda. Although the final size of the bill looks set to be reduced from $3.5 trillion to just under $2 trillion, a deal should nonetheless provide a decent boost to old economy stocks. 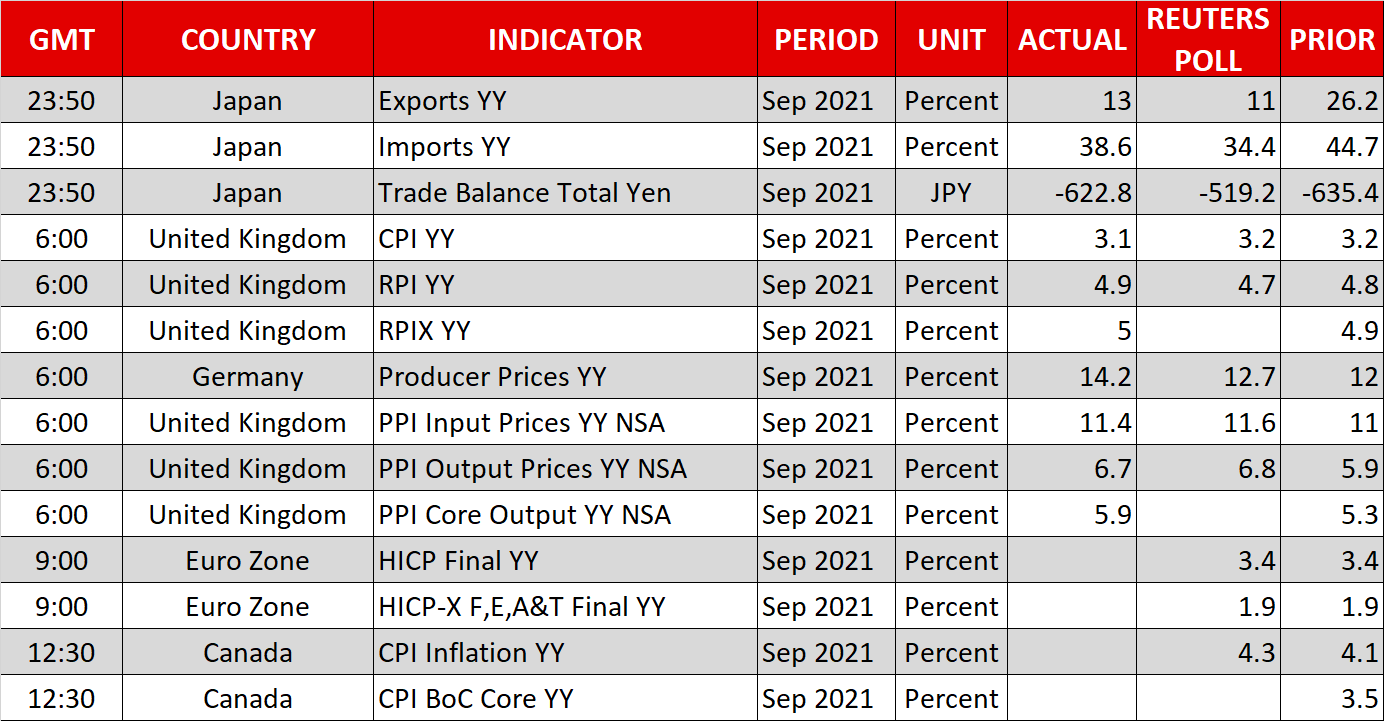