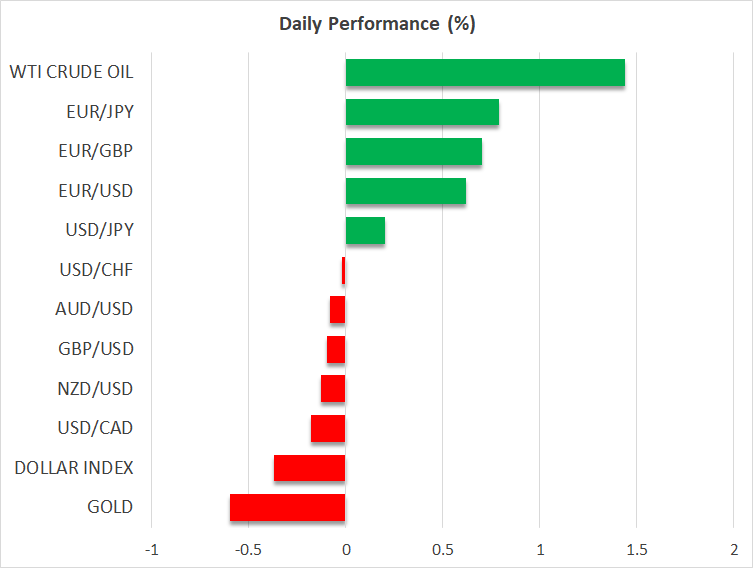 The euro is gaining traction on Thursday, extending this week’s rebound to flirt with the $1.09 level, as investors ratchet up their bets that the European Central Bank is getting closer to hiking rates soon. Several policymakers have raised the prospect of a Q3 liftoff this week – a move that would involve ending asset purchases in July. Some have suggested that QE is wrapped up even sooner, as early as June, so that rates can begin to go up in July, while others have flagged an end to the ECB’s negative rate policy by year-end.

An increase in Emmanuel Macron’s poll lead in recent days over his far-right rival Marine Le Pen in the French Presidential race is also likely bolstering the euro.

All eyes will now be on President Christine Lagarde when she speaks at an IMF panel discussion in Washington later today. Fed chief, Jerome Powell, will also be a panellist at the same seminar, while Bank of England Governor Andrew Bailey will be participating in a separate event on the sidelines of the IMF’s Spring Meetings.

After Fed Governor Mary Daly yesterday gave the strongest indication yet that a 50-basis-point rate hike in May is a done deal, any remarks by Powell on monetary policy might not stir much of a reaction. But any attempts by Bailey to provide clarity on the BoE’s rate path could move the pound amid some doubts about the pace of tightening over the coming meetings.

Sterling was trading flat against the US dollar on Thursday, holding in the $1.3065 region. But the euro’s lofty gains pulled the dollar index lower, and the greenback could only advance marginally against the yen.

Japan’s finance minister, Shunichi Suzuki, and Bank of Japan Governor Haruhiko Kuroda have been stepping up the rhetoric against rapid falls in the yen at this week’s G7 meeting. However, so far, there’s been no reference to direct intervention, suggesting that policymakers are not planning any action just yet.

Nevertheless, the yen has managed to halt its freefall in the last couple of sessions and is steady around 128 against the dollar.

CPI data send kiwi and loonie in opposite directions

Treasury yields are partially rebounding today following yesterday’s sharp drops, giving the dollar a leg up against the antipodean pairs at least.

The kiwi came under pressure, slipping below $0.68, after CPI data out of New Zealand earlier today were slightly below expectations. The annual inflation rate jumped one percentage points in the first quarter to 6.9%, but this was somewhat below forecasts. Although investors still expect the RBNZ to hike rates by 50 bps again at its next meeting, they think policymakers might proceed more slowly after that.

The Canadian dollar, on the other hand, got a big boost from stronger-than-expected inflation numbers out of Canada on Wednesday. Both the headline and core figures were well above the forecasts in March, reinforcing the hawkish bets for the Bank of Canada.

While it’s somewhat of a mixed picture in the FX world, the mood is overwhelmingly positive in equity markets. European shares opened with solid gains on Thursday, though London’s FTSE 100 was the exception as the index was dragged lower by mining stocks.

Chinese stocks also bucked the trend in Asian markets as local investors have been disappointed by the absence of stronger policy action by authorities to counter the slowdown in China’s economy. Policymakers have shifted their attention to the exchange rate in recent days, allowing the yuan to depreciate sharply against the dollar, which hit 6.45 yuan today for the first time since last October.

But things are looking up on Wall Street as upbeat earnings by Tesla appear to have alleviated the gloom sparked by Netflix’s shock results.

The Nasdaq Composite slid 1.2% yesterday as Netflix saw its share price crash by 35%. But the Dow Jones managed to close up and futures point to strong gains for the main US indices.

Tesla is expected to surge when trading starts, as the stock is up almost 7% in pre-market trade. The company reported record profit for Q1 after the market close yesterday. AT&T, American Airlines, Blackstone Group and Snap will be reporting their results later today.