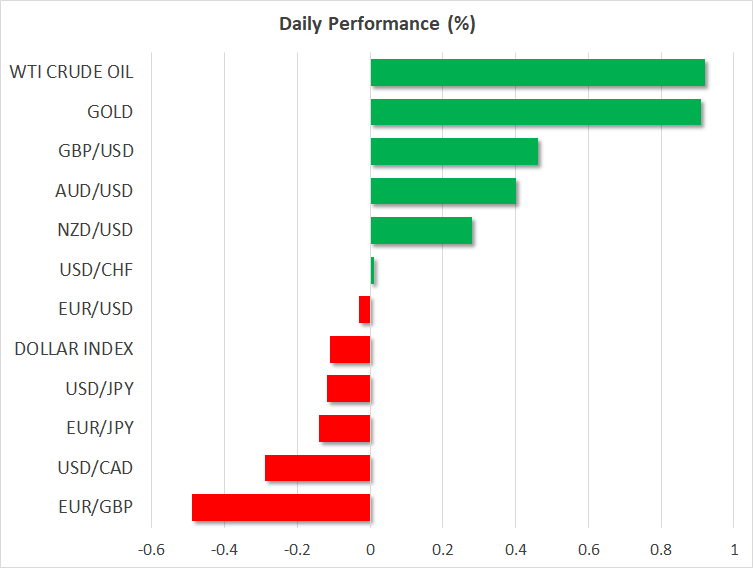 Risk appetite was riding high on Wednesday after Treasury Secretary nominee Janet Yellen reignited hopes of more massive stimulus packages in the United States in her confirmation hearing yesterday. Yellen went out of her way to make the case for higher spending to counter the health and economic devastation caused by the pandemic, arguing that the smartest thing to do when rates are low is to “act big”.

While it’s still uncertain how much support there would be in the Senate for Yellen’s big spending plans, the fact that the incoming Biden administration sees getting the virus under control and reviving the economy as its top priority is music to investors’ ears. Investors were also somewhat relieved from Yellen signalling that there were no immediate plans to raise taxes.

Moreover, signs that outgoing President Trump will leave the White House quietly and the stepped-up security for Joe Biden’s inauguration later today that should ensure an incident-free ceremony underpinned the positive sentiment.

Stocks on Wall Street closed sharply up on Tuesday, with the Nasdaq Composite coming just shy of its record high. The tech-heavy index could get a further boost today after Netflix shares rallied in after-hours trading following yesterday’s strong earnings report. The main earnings highlights on Wednesday will be Morgan Stanley, Procter & Gamble and United Airlines.

But the upbeat mood wasn’t confined to US markets as stocks in Hong Kong and Australia soared to multi-month peaks, and most major indices in Europe opened higher.

Expectations of massive debt-funded spending appear to be rekindling the reflation trade. However, despite the latest solid gains in stock markets, there was no sense of a return to a runaway rally as the virus escalation in more and more countries is keeping a lid on risk appetite.

US Treasury yields were also surprisingly steady in the last 24 hours, drifting slightly lower and adding weight to the sliding dollar. After edging higher during most of January, the US dollar may be about to revert to its long-term downward path if Biden’s team moves swiftly to not only press ahead with its Covid and spending plans but to win bipartisan support.

The greenback’s downside reversal was a boon for gold, which is up almost 1% today to break above the $1,850/oz level.

Risk currencies also roared higher, led by the pound and Australian dollar. The kiwi, though, was only modestly lifted by the biggest increase in dairy prices since July in the latest dairy auction, while the Canadian dollar’s gains were slightly held back from concerns about Biden’s intention to cancel the Keystone XL pipeline project as well as caution ahead of the Bank of Canada’s policy decision later today. The BoC is not expected to announce any change in policy but might strike a more dovish tone.

The euro bucked the trend, however, to move marginally in the red versus the dollar on reports that the European Central Bank is targeting Eurozone government bond yields in a bid to keep the spreads compressed. The Bloomberg report offset the gains the euro made after Italy’s prime minister narrowly won a vote of confidence in the country’s Senate yesterday.