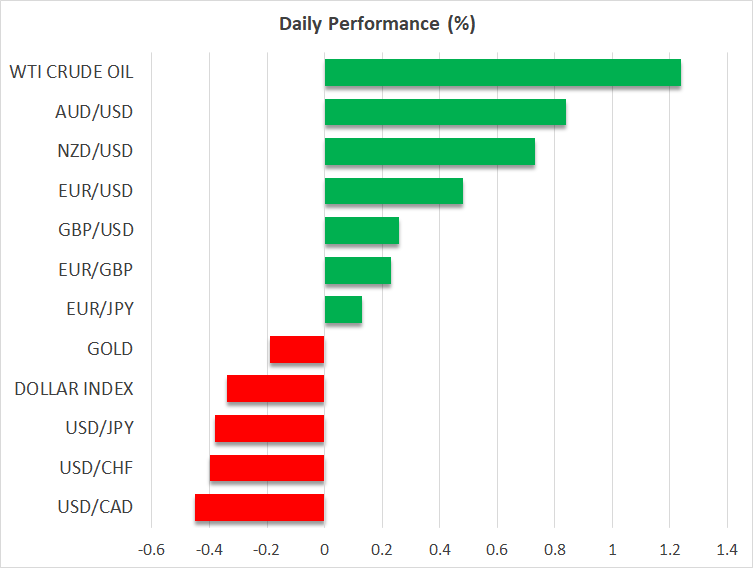 The Japanese yen continued to slump on Wednesday, but its overnight losses lessened heading into the European session as government bond yields retreated slightly. The US dollar scaled a new 20-year high of 129.40, surpassing the 129 level for the first time since May 2002. However, it later fell back to around 128.50 yen as the rally in Treasury yields lost some steam.

The 10-year Treasury yield is getting dangerously close to hitting the 3% level for the first time in three years as the hawkish rhetoric from the Fed shows no sign of being toned down. The normally dovish chief of the Minneapolis Fed, Neel Kashkari, warned on Tuesday that the Fed’s job of containing the surge in inflation “will get harder” if the lockdowns in China create further chaos to global supply chains.

Fed rate hike bets for December inched up in futures markets but the dollar is taking a bit of a breather today, with its index against a basket of currencies slipping about 0.2%. The yen has subsequently managed to steady somewhat against its three main rivals – the dollar, euro and pound – but is headed for further losses against the commodity-linked currencies.

The BoJ is at it again

The Bank of Japan was active again in the bond market today, purchasing Japanese Government Bonds as the 10-year yield tested the 0.25% upper cap of its yield target band. Adding further strain on the yen, Japan reported a record trade gap in March as the cost of energy and other imports soared.

Speculation is mounting about whether the Japanese government will instruct the BoJ to intervene in the FX market to put a floor under the yen’s slide. Many analysts see the 130 per dollar level as a red line for policymakers that could prompt stronger verbal intervention if breached. However, it is unclear if there is the resolve for outright intervention as other central banks may be unwilling to take part in a coordinated move to prop up the yen.

The loonie and kiwi dollars were both edging higher on Wednesday ahead of their respective CPI readings due later today in Canada and New Zealand. The Australian dollar was also up and joint best performer of the day along with its kiwi cousin.

The aussie has staged an impressive rebound over the past two days despite worries about the growth outlook in China – Australia’s largest trading partner – amid the ongoing shutdowns in Shanghai. A further partial relaxation of restrictions is likely bolstering optimism that the lockdowns will end soon, while expectations that the RBA will almost certainly hike rates in June at the latest is another positive for the aussie.

China’s lockdown easing might also be aiding crude oil, which is reversing some of yesterday’s steep losses. WTI futures were last quoted up 1.25% at $103.30 a barrel.

Oil prices plunged on Tuesday after the IMF slashed its forecast for global growth by 0.8 percentage points to 3.6% compared to its January prediction due to the expected hit from the war in Ukraine and sanctions against Russia.

However, with fresh supply disruptions in Libya and the European Union probably waiting for the French presidential election to be over before announcing a ban on Russian oil imports, the outlook remains positive for now.

In contrast, gold extended its decline today, hitting a more than one-week low of $1,938.65/oz even as the dollar and US yields were pulling back.

In equity markets, US stock futures turned negative on Wednesday, indicating Wall Street will not be able to repeat yesterday’s impressive performance. The S&P 500 jumped by 1.6% and the Nasdaq Composite rallied 2.2% on the back of better-than-expected earnings releases this week, including from Johnson & Johnson.

Tech stocks posted strong gains too despite the climb in yields. But what was more striking was the fact that equity traders seemed to ignore the moves in Treasury inflation-protected securities. Real yields in the US crossed above zero yesterday for the first time since March 2020, suggesting financial conditions are tightening.

But with markets potentially having already priced in very aggressive tightening by the Fed, positive earnings surprises still appear to have the capacity to boost equities. Although the opposite also stands as the upbeat mood faltered after Netflix reported another quarter of disappointing earnings.

The streaming giant announced its first quarterly drop in subscribers in more than a decade yesterday after the market close. Although Netflix did manage to beat its earnings per share estimate, its stock plummeted by over 20% in after-hours trading as investors were gloomy about its growth prospects.

Tesla will be in the spotlight when it reports its results after Wall Street’s closing bell. 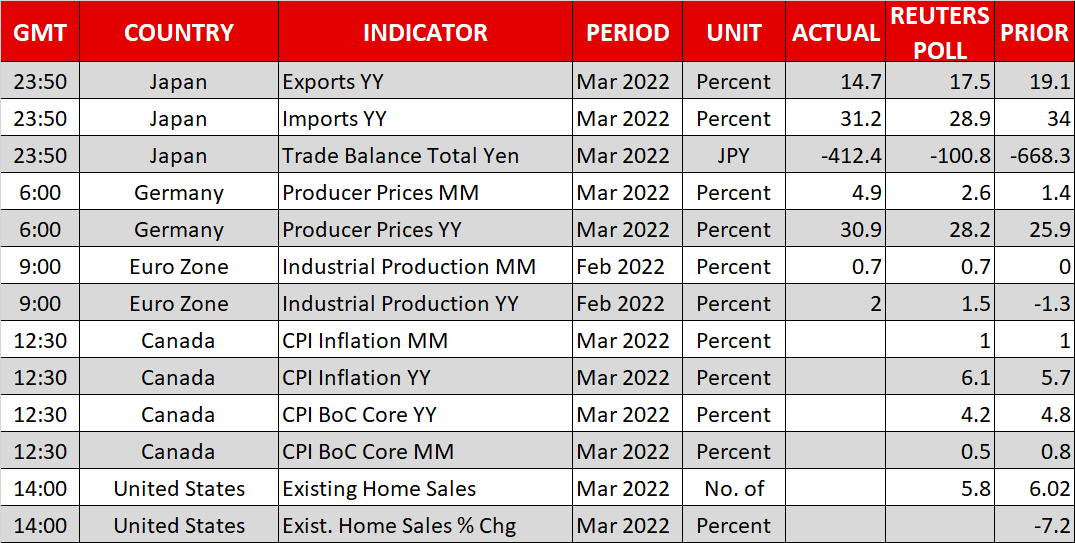