The world's leading entertainment powerhouse will release its quarterly results on Thursday, after Wall Street's closing bell. Profit numbers aside, the real driver for markets will be the subscriber growth metrics of Disney's streaming service. The future remains bright overall but a lot of good news is already priced in judging by the company's tech-like valuation. Stellar execution is now required.Never let a good crisis go to waste

It's been a huge year for Disney. The pandemic forced the company to shut its theme parks and pushed back the timing of its theatrical releases as cinemas closed down, devastating its profits and revenue. But in a crisis, there is also opportunity. The firm's management recognized that for Disney to survive and thrive, the ship had to turn towards the streaming arena.

Enter Disney+, the new streaming service that has topped 100 million subscribers since launching in late 2019. That's quite impressive considering that it took Netflix several more years to reach that milestone. 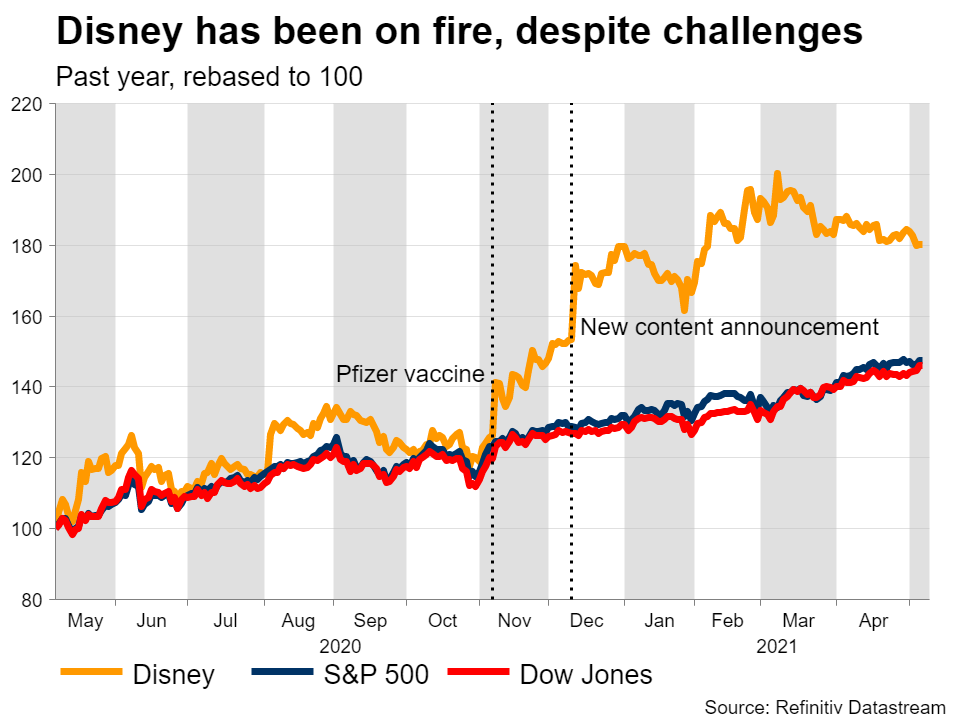 The Achilles' heel for Disney+ is that while it is rich in blockbuster titles the company already owns – like the Marvel and Star Wars franchises – it lacks new content. But this issue has now been addressed. In a corporate event in early December, management informed investors that the business will be investing heavily in original content and new series, to make their online platform even more competitive.

Decent quarter expected, but all eyes on guidance

Turning to the upcoming results, for the quarter that ended in March, the company is expected to report earnings per share of $0.28 on revenue of $15.89 billion. That would mark a decline of 53% for earnings and 12% for revenue from the same quarter last year.

While these numbers seem dismal, remember that they cover a period when Disney's amusement parks and cinemas across the world were still closed down. That's changing. The parks in California and Florida are finally running again, albeit under limited capacity, while movie theaters have reopened in much of the US.

Beyond earnings, what will really drive the market reaction will be the guidance from the firm's executives around subscriber growth in streaming over the coming quarters. Additionally, any remarks about when they expect the parks to be fully operational again and when their next movies will hit the theaters could also be crucial.

If management is optimistic and their internal projections point to continued strength ahead in the streaming space, that could overshadow even dismal earnings results, as has been the case this past year.

Valuation looks better, but not great

Turning to valuation metrics, the stock still looks pricey, even though it has corrected lately. Let's have a look at a simple valuation metric, the 12-month forward price-to-earnings (PE) ratio. This ratio denotes the dollar amount someone would need to invest to receive back one dollar in annual earnings, so the higher it is, the more 'expensive' a stock is considered. 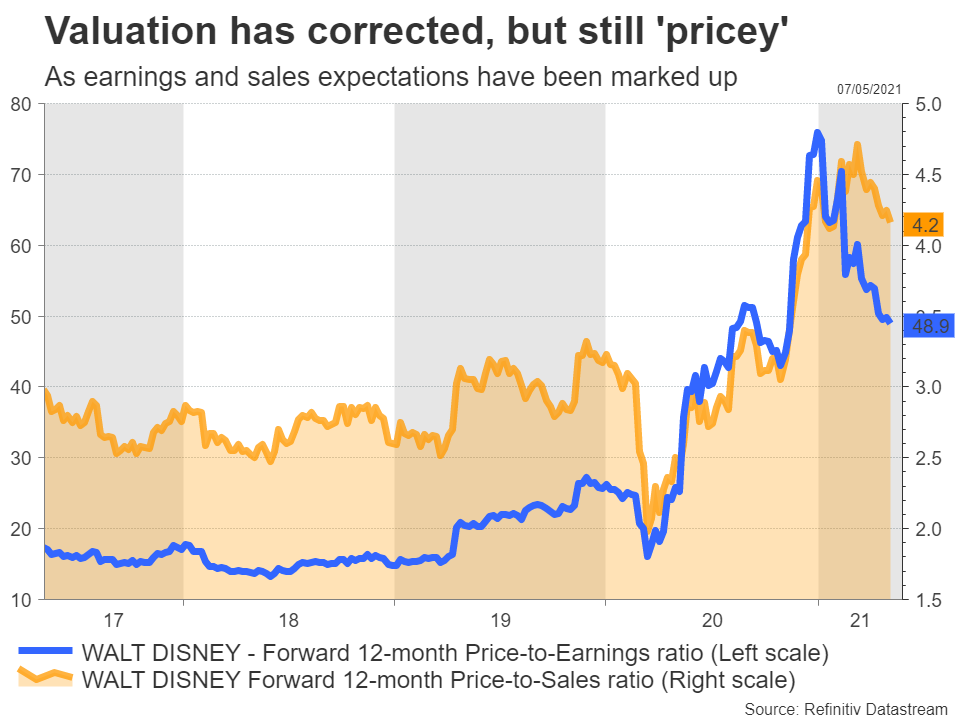 Disney's currently stands at 48.9x, which is quite high for a mature company. On the bright side, it has fallen substantially in recent months, as earnings expectations have been revised higher with parks and cinemas reopening. The forward price-to-sales ratio also stands at an elevated 4.2x.

What does all this really mean? It simply implies that a lot of good news is already priced in. Investors seem confident that management will manage to execute this turnaround successfully.

But when so much optimism is baked into a stock, any setbacks or negative news can spark a deep correction as those rosy expectations are unwound. While the future remains bright, absolutely stellar execution is needed going forward.

Taking a technical look at Disney's share price, in case of cheerful guidance around Disney+, the price could edge higher towards the 190.5 region.

In case of a disappointment, a potential break below the recent lows of 179 could set the stage for a test of the 169 zone.