Exxon Mobil and Chevron are scheduled to report second-quarter earnings on Friday, July 29, before Wall Street’s opening bell. The energy behemoths are anticipated to post record profits as the long-lasting supply-demand imbalance in the oil market, which deteriorated by the fallout from the Russian invasion of Ukraine, continues to generate bumper earnings for the broader sector. However, investors will be keeping a close eye on whether rising costs and reducing demand due to increasing recession fears will dim the forward guidance.Stellar performance in 2022

The energy sector has seen a remarkable surge since economies started rebounding from the Covid-19 pandemic. More precisely, the pandemic-induced recession forced oil producers to pump less as demand slumped horrifically. Then, when the world started to cautiously emerge from the pandemic, the constrained supply, alongside the chronic under-investment in fossil fuels due to the global intensifying efforts for a quick transition towards clean energy, induced upward pressures on energy commodities.

Aside from that, the Russian invasion of Ukraine and the consequent sanctions from Western allies on Russian energy exports caused the already elevated prices to spike further. Furthermore, the OPEC+ cartel has been repeatedly refusing to hike its output despite continuous calls from the US and major European governments. Summing up, all the above have acted as catalysts that boosted oil prices, enabling energy companies to experience a big jump in both earnings and revenue figures. 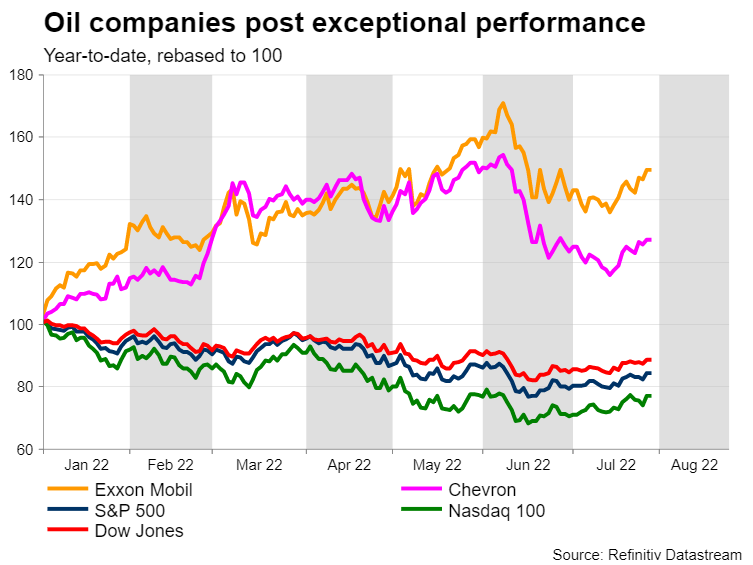 Governments around the world have been imposing higher taxes on energy companies to help consumers cope with the record-high oil and gas prices. Specifically, the UK imposed a windfall tax on oil and gas profits earlier this month, while Italy has passed a levy on the energy industry. In the US, President Joe Biden accused oil companies of exploiting high gasoline prices to widen their profit margins at the expense of consumers.

As expected, solid financial figures are projected for both Exxon Mobil and Chevron. The former is expected to post revenue of $132.70 billion for the second quarter, according to consensus estimates by Refinitiv IBES, which would represent a massive year-on-year growth of 95.89%. Earnings per share (EPS) are estimated to reach $3.74, marking an increase of 240% on an annual basis and an 80.6% increase versus the previous quarter.

For Chevron, forecasts by Refinitiv analysts suggest that earnings per share (EPS) are expected to rise from $3.36 in the last quarter to $5.10, which would translate to an annual jump of 192.8%. Revenue is projected at $59.29 billion, a substantial increase of 57.51% over the same period last year.

Up until now, energy firms have used this cash surge to cut debt accumulated during the pandemic, but the big question that lies ahead is where all the excess cash flow will be invested from now on and how much will be directed back to shareholders.

Even though both Exxon Mobil and Chevron have been massively outperforming markets due to their stellar financial performance, their valuations remain substantially low, indicating that investors are not betting on their longer-term prospects. The 12-month forward price-to-earnings ratios, which denote the dollar amount someone would need to invest to receive back one dollar in annual earnings, currently stand at 8.5x and 9.0x respectively. These ratios are not only way lower than the tech-heavy Nasdaq’s average multiple of 22.3x but also against the S&P 500’s 16.0x. 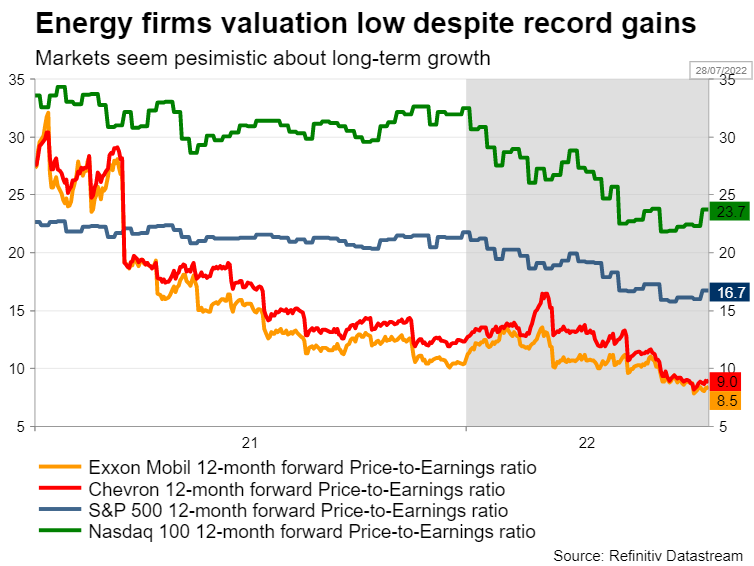 It is common knowledge that geopolitical flare-ups and supply constraints might continue to keep the price of energy commodities elevated, further boosting the sector’s performance. However, as soon as the supply-demand imbalance is resolved, energy prices are likely to come back down to earth and energy companies’ shares will probably experience a significant pullback. Therefore, the future of energy firms’ lies on how efficiently they will invest their current cash surplus and how well they diversify their operations, probably in sustainable energy production, in the future.

The ongoing energy crisis has triggered a rally in Exxon Mobil’s stock price, which has reached a fresh all-time high in 2022. Although the stock price has experienced a partial downside correction, it appears to be regaining ground ahead of Q2 earnings, currently trading above the upper Bollinger band.

In the positive scenario, bullish forces could propel the price above its double-top region of $93.25. Successfully breaching that zone, the spotlight could shift towards the all-time high of $105.50.

On the flipside, should financial figures disappoint, the bears might aim for the $85 mark. A violation of the latter could send the price to test the recent trend reversal point of $80.50.

To sum up, there is still significant upside potential for the energy sector as it has historically outperformed in periods of rising interest rates, while the energy crisis seems to be sticking around for longer. Nonetheless, if the imbalance in oil markets is finally resolved, oil companies will face tremendous downside pressures.