Netflix Inc crossed the 200 million subscribers milestone in the last quarter, as the pandemic-fuelled stay-at-home trend boosted demand for streaming services. However, with the likes of Disney+ and others fast catching up, Netflix has seen its market share decline. Can the Company maintain the same impressive pace of subscriber growth when it reports its Q1 earnings on Tuesday after the market close? Any disappointment in subscriber numbers could potentially overshadow further improvement in its bottom line.Is Netflix losing its crown?

Competition is heating up in the streaming arena as Netflix battles it out with long-time rivals Amazon Prime Video and Hulu, while it fends off relative newcomers such as Apple TV+, Disney+ and HBO Max. Despite a stellar year in 2020 when the coronavirus outbreak trapped people indoors, lifting demand for online activities, the world’s largest streaming service is facing intense competition in the increasingly overcrowded sector.

Disney+, widely considered as the biggest threat to Netflix’s dominant market share, reached 100 million subscribers back in March, taking it just 16 months to achieve this feat. In comparison, it took Netflix 10 years to accomplish the same success. Disney+ has launched several big shows in recent months, with originals such as WandaVision and The Mandalorian creating plenty of buzz. But while Netflix regularly dominates the Top 10 of most streamed shows around the world, its reign may not last much longer unless it invests in more original content and ups spending on marketing, both of which would raise costs, hurting profitability.

Another earnings jump is anticipated

For the time being, however, there is plenty to be positive about Netflix. The streaming giant is expected to post revenue of $7.13 billion for the first quarter, according to consensus estimates by Refinitiv IBES, which would represent a year-on-year growth of 23.6%. Earnings per share (EPS) are estimated at $2.95 – an 88.1% increase over the same quarter in 2020. Net income is forecast to rise by 89.6% to $1.34 billion. 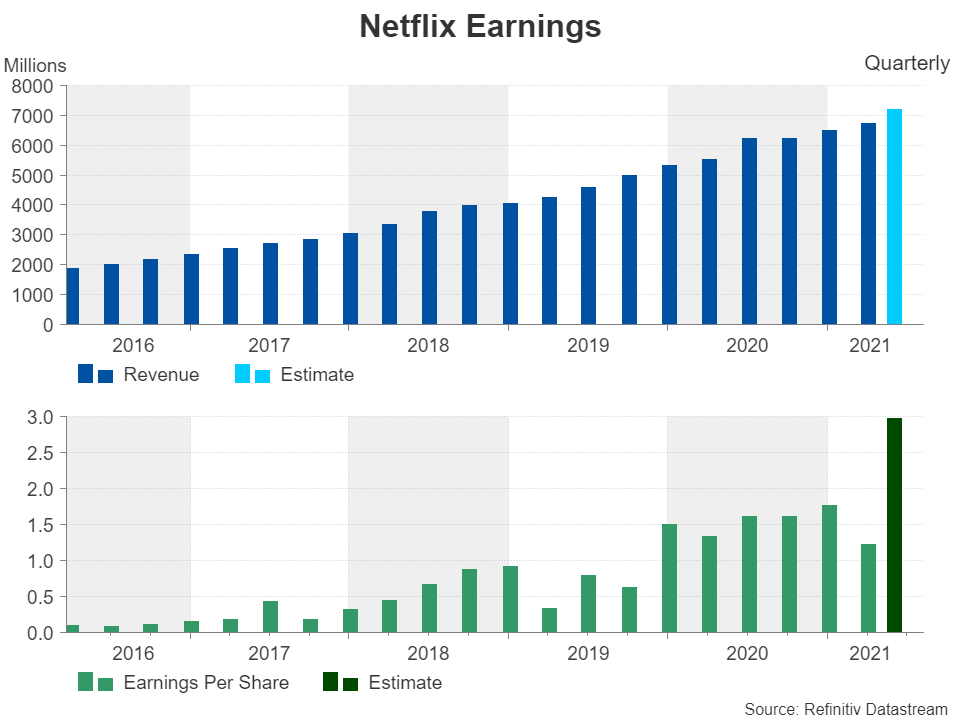 As always, the latest figure on how many new subscriptions the Company attracted in Q1 will be just as crucial as the earnings results. Netflix added 8.5 million new users in Q4 2020 and is forecasting 6 million new subscribers for Q1. A bigger-than-expected increase in subscriber growth would ease fears that the Company is starting to struggle to maintain its lead in the streaming industry.

However, the management’s guidance on the next quarter might be what decides how the stock price reacts. Netflix stock has been trading between the 61.8% and 50% Fibonacci retracement levels of the January-March down leg for much of April. An earnings beat, combined with a strong outlook, could propel the stock above the 61.8% Fibonacci of $554.92, bringing the price within closer range of the all-time high of $593.29. A rally above this record peak would turn attention to the 123.6% and 161.8% Fibonacci extensions of $616.99 and $655.36, respectively.

Despite the uninterrupted run of revenue surge of recent years, Netflix remains overvalued by most metrics, with a bloated 12-month price/earnings (P/E) ratio of 76.63 (as of April 19, 2021). It’s forward 12-month P/E ratio is only marginally more attractive at 50.1, though its competitors don’t exactly fare any better. 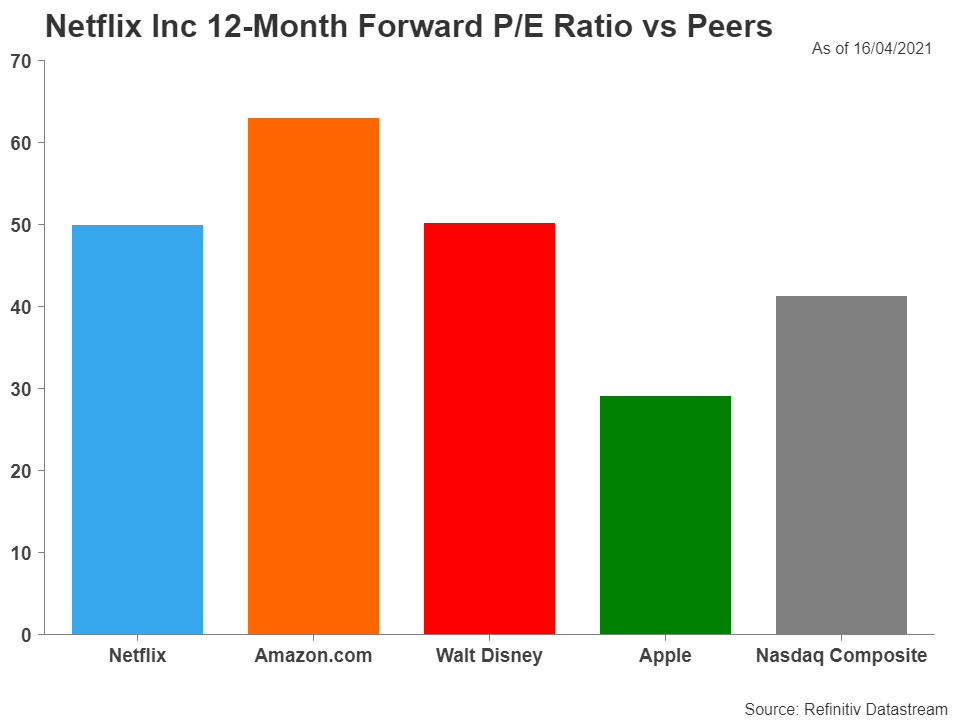 Nevertheless, analysts are holding on to their bullish views of Netflix stock, recommending it as a ‘buy’ and giving it a median price target of $650.00. That suggests there is still a lot of scope of healthy upside for the share price and as long as the Company can stay upbeat about being able to expand its subscriber base while keeping costs down, a new all-time high could soon be on the cards.