Streaming giant, Netflix Inc, will be the first of the major tech firms to report its second quarter earnings results on Tuesday after Wall Street’s closing bell. Having boomed during the pandemic lockdowns, Netflix’ incredible growth has come to a halt, losing subscribers for the first time in 10 years in the first quarter. Subsequently, the stock price has crashed by about 70% this year, relinquishing its title of a Wall Street darling. Can the company turn things around with its upcoming earnings?Netflix is losing subscribers

After adding millions of new subscribers in 2020, Netflix saw a marked slowdown in subscriber growth in 2021. Although some deceleration was inevitable after a period of such strong growth, the company shocked traders when it revealed it lost 200,000 subscribers in the first three months of 2022. To top it up, the company forecast that it would lose a further two million subscribers in Q2.

The stock has gone from being one of the best performing on the S&P 500 and Nasdaq 100 in 2021 to being the worst in the year-to-date. But whilst the broader downtrend on Wall Street certainly hasn’t helped the share price performance, another reason why investors have reacted so negatively is the fact that the loss in subscribers came even as spending on new content surged. 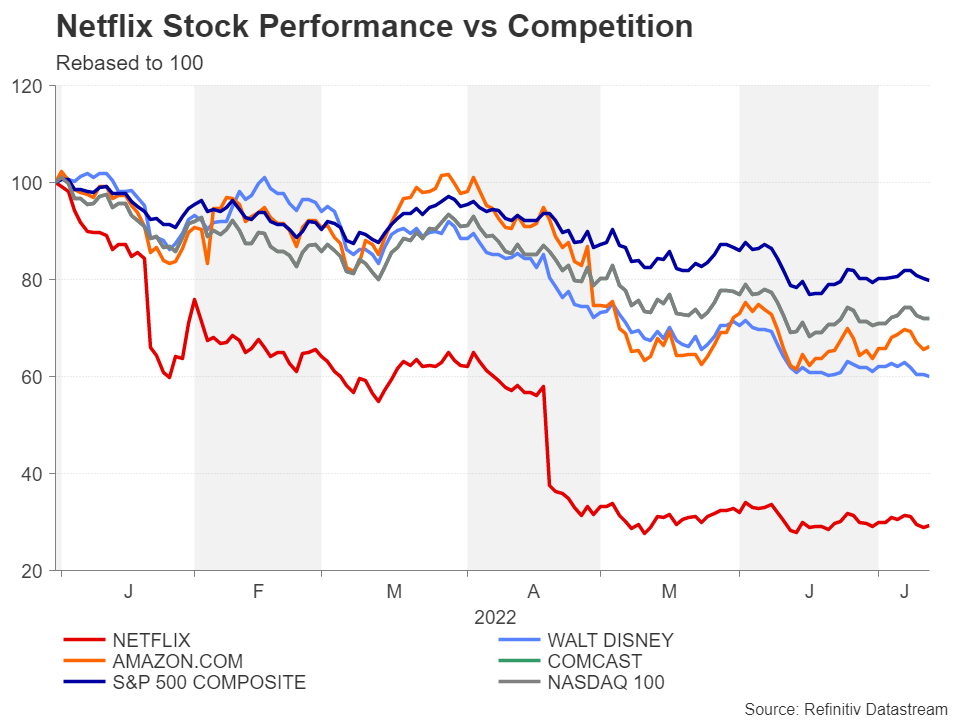 The company has said it wants to rein in its budget for new content and this could contribute to improved margins over time but probably not before 2023 as its planned spending for the current fiscal year is higher than for 2021.

Nevertheless, despite all the challenges – the fading effect of the pandemic, intensifying competition, loss of the Russian market and more recently, the worsening spending squeeze from the cost of living crisis – revenue growth has held up surprisingly well even though it is clearly slowing.

The year-on-year increase in revenue in Q1 was 9.8%. It is expected to have moderated slightly to 9.7% to $8.05 billion in the June quarter according to Refinitiv IBES estimates. Growth in earnings per share is anticipated to have been even more sluggish. The consensus forecast for Q2 EPS is $2.99, which would represent a marginal increase of two cents from the same period a year ago. 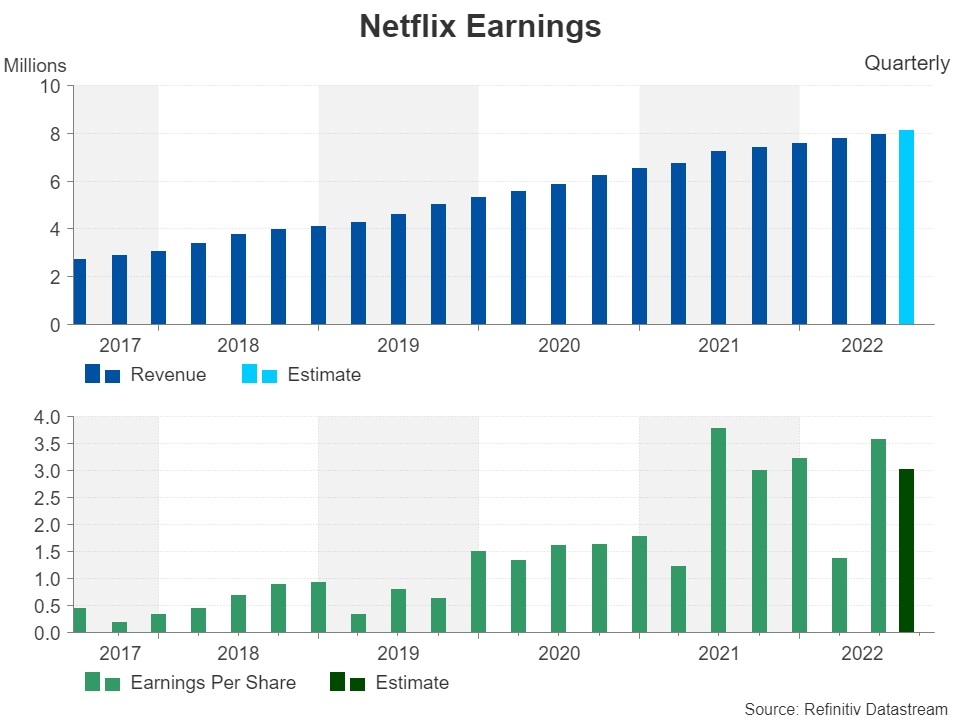 If actual revenue beats the estimate, it might reduce question marks about Netflix’s strategy of late to raise subscription prices and focus its efforts on the more profitable accounts where it doesn’t lose money from password sharing between different households.

Stronger-than-expected revenue would also reflect the company reaping some benefits from its push into the gaming industry. After several acquisitions and millions of dollars of investment, the company’s library of games is expanding, and this should help its efforts to diversify its revenue stream.

How will the stock react?

The share price is currently trading just below its 50-day moving average (MA), which is proving immediate resistance at $185.00. An upbeat set of results could provide enough positive impetus for the price to claw above the 50-day MA. Though, for a more conceiving rebound that would bring into scope the 161.8% Fibonacci extension of the May-November 2021 downtrend at $341.07, investors would additionally need to see a recovery in subscriber growth.

But if the earnings disappoint and the management’s guidance for the current quarter fails to get investors’ pulses racing, the bears could have a free run until the 261.8% Fibonacci extension in the $120 region.

Worries about future revenue growth are unlikely to go away quickly and whilst there may be some encouraging trends in the Q2 earnings, what investors will really want to see is a stabilization in subscriber numbers. Until that happens, the stock is expected to remain under pressure. Analysts have cut the recommended price target several times already this year and the median price is currently $265.00.  The average recommendation has also been downgraded from ‘buy’ to ‘hold’ since April.

However, from a valuation perspective, Netflix is a lot more attractive than it was at the end of last year. Even on a comparable basis, the company is now cheaper than its main rivals, with both the 12-month trailing and forward price/earnings (PE) ratios below those of Amazon.com, Walt Disney and Apple following the sharp retracement of the stock since November. 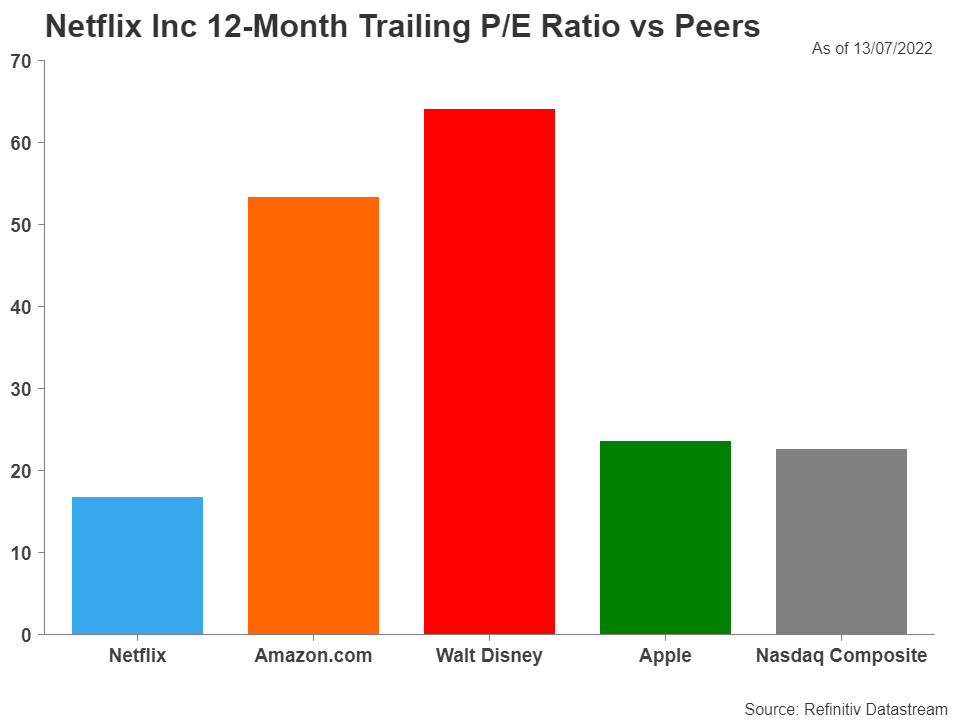 Too soon to give up on Netflix?

For long-term investors, there are other factors to consider. For one, Netflix is in a better position than the competition to take advantage of the growth in international markets where the streaming industry is still in its infancy as opposed to saturated markets like the United States. Another is that Netflix just announced a deal with Microsoft to develop a new ad tier for its subscription offerings where there would be an option for a cheaper service that includes adverts.

However, it will likely take time for the company to turn its fortunes around, especially against the current macroeconomic backdrop, and there’s a good chance earnings will be unimpressive for several more quarters.