Netflix will report its first quarter results for 2022 on Tuesday, April 19, after the market close. Its stock has already been under the spotlight this year as it’s wiped out all its post-pandemic gains. When the company announced slowing subscriber growth for Q4 back in January, the stock crashed by almost 22% and it hasn’t been able to recover since. It’s unlikely that the Q1 earnings will be any better, so can there be anything positive for the share price in the Q1 report?Has Netflix fallen out of favour?

Having been one of the pandemic darlings in 2020, investors are under no illusion about Netflix’s change in fortunes in recent quarters as the streaming giant transitions from a high growth to a mature business. A jump in subscriber numbers during the 2020 lockdowns substantially boosted the company’s bottom line. However, net subscriber additions have declined dramatically since then as the gradual lifting of Covid-19 curbs around the world has dented demand for stay-at-home activities.

Netflix shocked investors when it set a guidance of 2.86 million net adds for Q1. But the actual number could be even lower following the company’s exit from the Russian market. According to Refinitiv IBES estimates, net subscribers likely grew by 2.5 million in the first three months of the year. Netflix has joined the global boycott of Russia for its invasion of neighboring Ukraine and although the loss would only amount to around 1 million subscribers, a bigger worry is a slowdown in European growth from a subsequent potential economic meltdown on the continent. 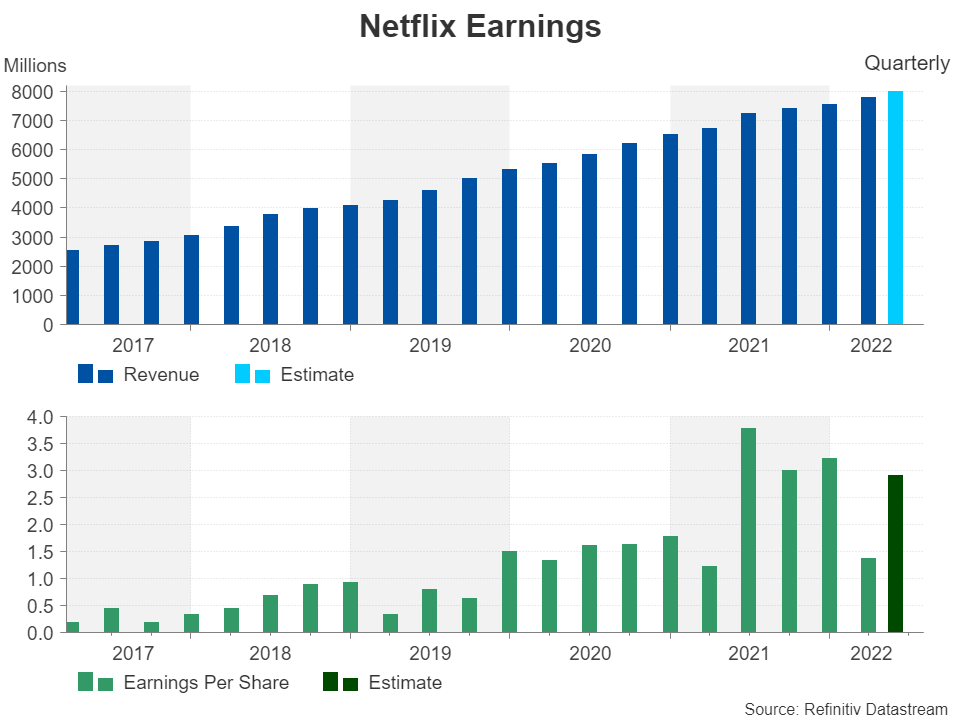 Unless the company surprises with a beat in earnings by a significant margin, which doesn’t seem very likely, it’s hard to see its share price making a dash for new all-time highs. Netflix stock slumped by 53% between its record high of $700.99 from November 2021 and its 2022 low of $329.82 set in March.

Competition is heating up in the streaming world

Aside from the weakening economic outlook in Europe and to a lesser extent in America, the ever-intensifying competition in the streaming industry is expected to continue to squeeze profit margins at Netflix. In March, the company hiked the price of its service in the US for the fourth time in as many years so it can afford to keep adding to its growing list of original content. However, it’s doubtful how many more times it will be able to do this without losing subscribers as the competition ups the pressure.

Netflix recently lost the rights to several Marvel shows to Disney+ as its license expired, leaving it with a gap in its catalogue for big franchise series. Moreover, the recent successes at the box office of movies like The Batman and Spider-Man: No Way Home suggests film lovers are finally returning to cinema theatres after a slow initial comeback.

No longer so overvalued

Nevertheless, with the company now seen as an established player in the streaming market and having the budget to produce more expensive content, it stands a better survival chance than most. Hence, analysts have maintained their ‘buy’ recommendation, although they have lowered their median price target for the stock to $502.50.

For long-term investors especially, the current share price of around $345 may be considered to be a bargain. Netflix’s trailing price/earnings ratio (P/E) of 31.3 (as of April 14) is also looking relatively attractive when compared to the likes of Amazon and Walt Disney (though not so much when compared to the industry average). Its forward P/E multiple has fallen substantially too, standing only marginally above Disney’s and Apple’s. 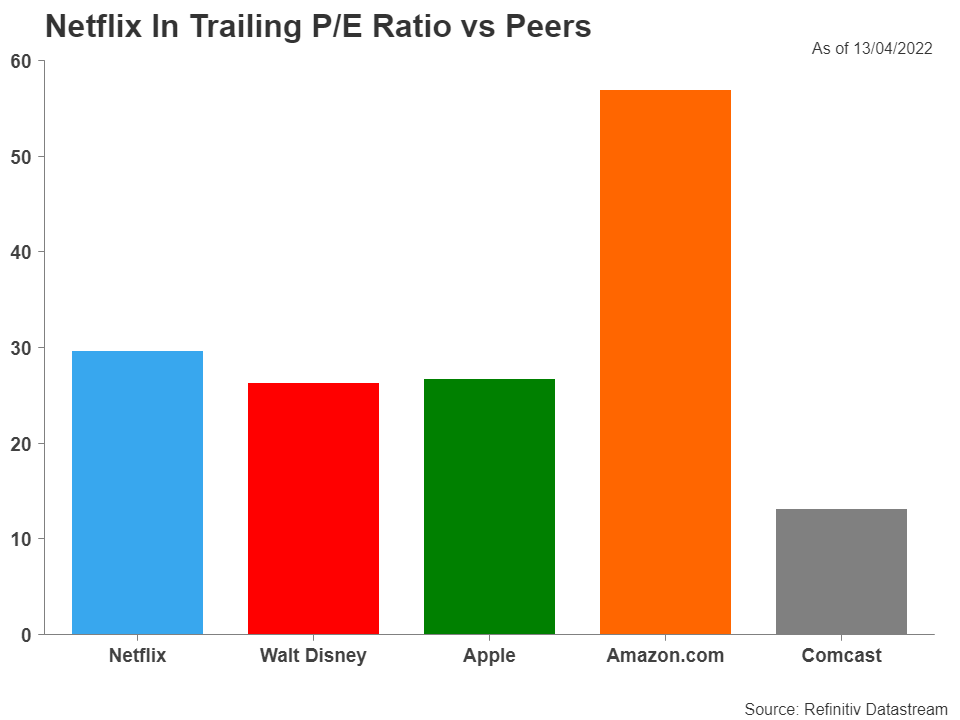 Can the stock rebound?

This potentially leaves the stock open to upside moves if the company reports better-than-expected growth in earnings, particularly if net adds also beat the estimates. The stock price has currently found support at the 161.8% Fibonacci extension of the May-November 2021 upleg around $341. A push higher is likely to meet resistance at the 50-day moving average (MA) at $377 before the 138.2% Fibonacci of $393.56 is challenged.

In the longer-run, however, the bulls would need to target the 200-day (MA) at $526 for the stock’s outlook to change from bearish to neutral.

However, if the Q1 results disappoint and the immediate support of $341 is breached, the stock could tumble all the way until the 200% Fibonacci of $256.

The main risk for the stock from the earnings call will be the guidance for the second quarter. If the company issues another modest guidance for subscriber growth for the next quarter, that could spark a new wave of selling in the stock. Investors will also be on the lookout for any updates about Netflix’s foray into gaming and whether the move has started to pay dividends. The company has made several acquisitions of game developers over the last year but it’s yet unclear if its bet on cloud gaming will pay off.