Netflix’s headlines are all about its South Korean drama-thriller “Squid game” these days, though whether its Q3 earnings results will be as victorious as its new big hit, will be discovered on Tuesday after the market close. The popular streaming provider will probably post mixed financial results, but, as usual, updates on subscription growth will be the primary source of volatility for the company’s stock. The recommendation from I/B/E/S Refinitiv analysts is buy.  Netflix outperforms rivals

Although it is not in the top list of the best S&P 500 performers year-to-date, Netflix saw its fortunes improve during the past two months on Wall Street, with its stock outperforming Disney’s and Amazon’s downtrend to a fresh record high at $646.87.

Certainly, rising competition from HBO Max, Disney+, Amazon Prime Video, Apple TV, and Peacock is still a big deal as rivals’ ramping innovation and investment in experienced content threatens Netflix’s industry throne. Fears that the reopening phase will reduce time spent on screens has also been a factor of caution since lockdown measures started to ease, though the famous streaming company proved that it can keep its subscribers engaged and watching its content.

Because of its expanding original international and diversified content, the company managed to keep viewers around ahead of its Q3 earnings results despite some legal penalties and criticism starting to come in. Following a year of production delays and a sharp slowdown in subscription numbers in the first half of 2021, new episodes of the beloved Spanish series Casa de Papel, as well as a flow of other popular shows such as “the Witcher” have likely boosted subscription growth during the third quarter.

Expectations are now for a 3.73 million addition compared to the company’s estimate of 3.5mln and the Q2 print of 1.54mln, but even if subscription growth were to miss estimates, the “Squid game” excitement, which is said to have topped all original content’s first-month viewership in October and have made up two-thirds of new entries in the current quarter, has already brightened prospects for the next earnings season.

If the new guidance echoes rising optimism about the holiday-driven Q4 season and signals a continuous normalization in member growth as the company is also scaling up in the gaming world, Netflix stock could see another test near its record high of 646.87. Above that bar, the door would open for the 261.8% Fibonacci extension of the latest pullback seen at $690.

Investors would also be interested to know how its sound international strategy is translating in margins and profitability, and particularly if its spending on content can increase at a slower pace than revenue growth in the coming quarters, keeping cash flows on the positive trajectory.

Technically, Netflix’s forward P/ E ratio is at 50.5 compared to the 48.1 average in the software and services sector and the 38.1 average in the technology industry. Hence, the stock is still looking overvalued, and investors may be sensitive to any turnarounds in the company's prospects. 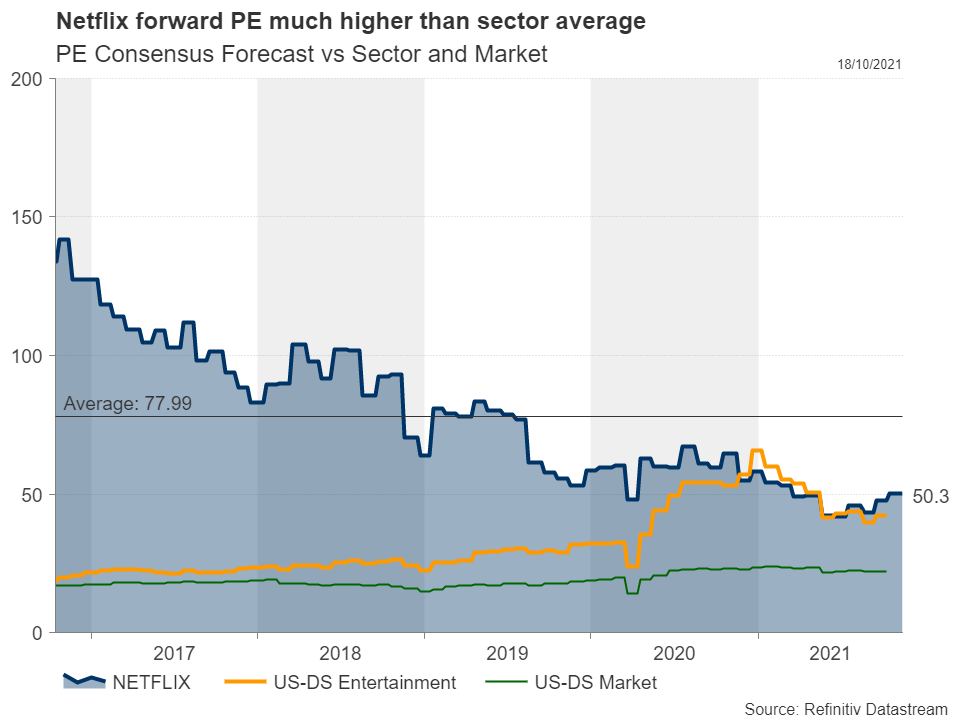 For example, a surprising conservative outlook and complaints of cost pressures may send the stock below the 20-day simple moving average (SMA) at 612, while a break below 600 may confirm additional declines towards the 50-day SMA and the 580 support region.

Nevertheless, as long as Netflix produces unique teasers at a "Squid game" pace, the rally could still have some way to go before the next turning point.