Twenty-twenty was a year that nobody will want to remember, but for stay-at-home companies like Netflix Inc, their services were never in greater demand. When the steaming service provider reports its fourth quarter earnings on Tuesday (after the market close), it’s expected to report another solid set of results as the virus resurgence in many countries likely kept more people at home. However, with rising competition, revenue growth might not match the highs of recent quarters and investors will be eager to see whether the latest price hikes have turned away subscribers.Another lockdown boost?

A year on from the onset of the pandemic, people in many parts of the world are once again finding themselves confined to their homes. Luckily for Netflix, its content already reached a long list of countries even before most people were familiar with the term ‘lockdown’. So the latest round of shutdowns across Europe and other regions potentially boosted the company’s top line in the fourth quarter of 2020, after the effect from the first lockdowns seemingly faded in the third quarter. Higher subscription fees could also have contributed to stronger growth in revenue.

However, looking at consensus estimates by Refinitiv IBES, revenue growth is not expected to have kept pace with that of recent quarters. Analysts are anticipating a year-on-year increase of 21.7% to $6.66 billion in Q4, which would represent the slowest growth since 2013. Earnings per share (EPS) are also not expected to be anything spectacular. They’re estimated to have fallen to $1.40 over the quarter from $1.74 previously, but to have gained 7.9% from 12 months ago. 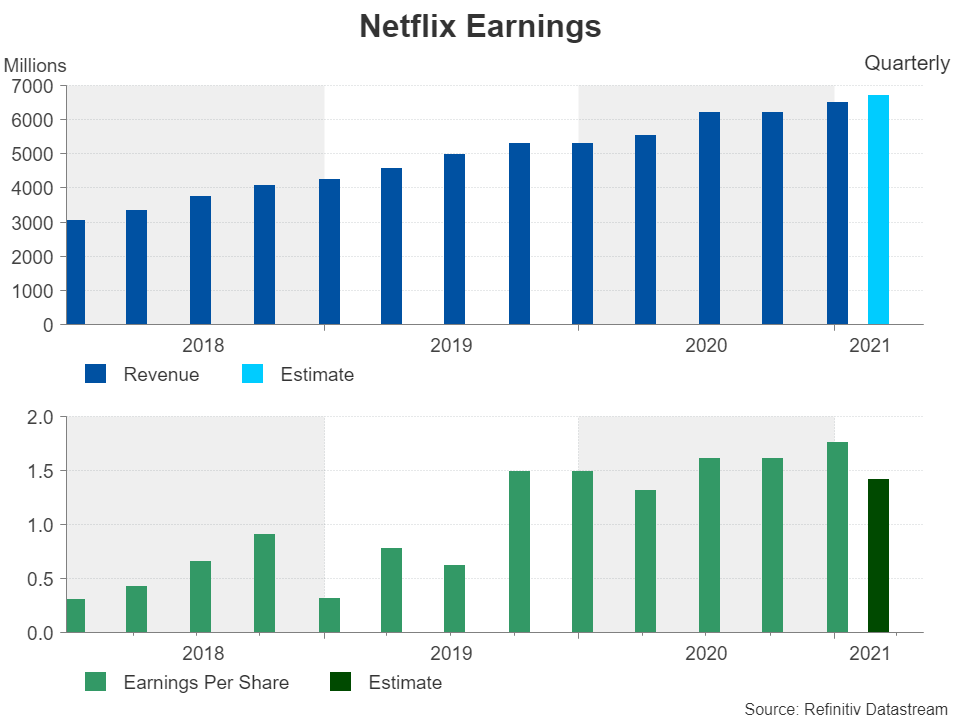 Rising costs, both due to the required extra safety measures during filming that are associated with the pandemic and the need to produce more of its own content to satisfy its growing subscription base, as well as compete with the likes of Disney+ could drag on profits. Hence, investors will be watching very closely to see to what extent growing subscribers and the recently announced price increases in some countries such as the United States and Canada offset those costs.

If Netflix’s earnings fail to satisfy expectations, its stock could extend its year-to-date decline, having already lost almost 8% of its value. Further losses could push the price towards its 200-day moving average at $479. Below that important support, the 38.2% Fibonacci retracement of the March-July uptrend at $466.45 could halt steeper falls.

The stock has been rangebound since making that record high, which contrasts to the broader bullish trend of tech shares. Having initially outperformed the Nasdaq Composite in the first half of 2020, Netflix stock has seen its lead narrow in recent months. 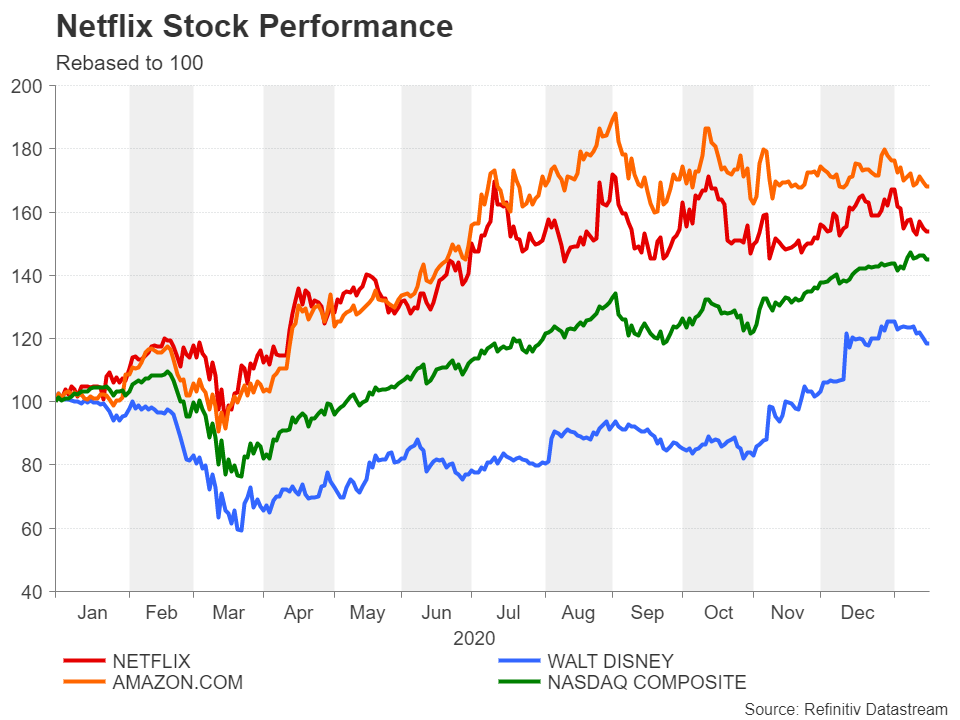 Doubts about the company’s growth prospects in a post-lockdown world as well as an extortionate PE value are likely to keep the bar for impressing investors high. As of January 15, the company had a trailing price/earnings ratio of 84.3 and a forward PE of 53.5. Although both measures are on par with that of its main competitors such as Amazon.com and Walt Disney, they are higher than the average for stocks in the Nasdaq Composite. 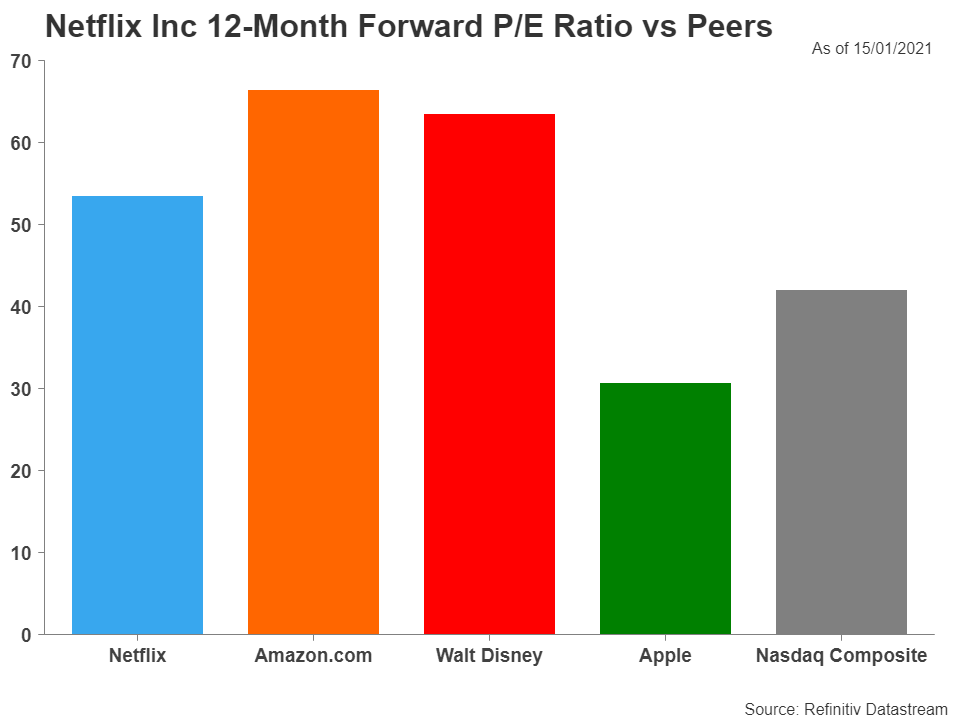 Nonetheless, despite the high valuation and intensifying competition in the streaming services arena, Netflix remains hugely popular among its users and analysts are for now sticking with their ‘buy’ recommendation for the stock. Whether investors think Netflix can hold on to its popularity will depend on how many new subscribers the company added in Q4 and its guidance for Q1 2021.

Subscriber numbers and price plans under the spotlight

In October, the company said it expected to add 6 million new subscribers in the December quarter, which would take its total subscribers above the 200 million threshold. Its updated guidance for both new subscribers and earnings for Q1 could be crucial in determining whether the stock’s breakout from its current sideways range is above it or below.

Almost as important will be what the company’s plans are for increasing prices in other countries. If Netflix expands its price hikes to more regions, that would suggest its strategy is working and is confident about retaining market share. However, should the company resist raising prices in additional countries, investors might interpret that as a sign that the more competitive prices of its rivals are eating into its customer base, sparking concerns that the Netflix brand may be starting to lose some of its appeal.