After nearly two weeks of absence, central banks return to the agenda, with the Reserve Bank of New Zealand taking the torch on Wednesday, at 02:00 GMT. The Bank is widely expected to deliver another 50bps liftoff and thus, a hike of this size by itself may not excite NZD traders. Any market reaction could come from the Bank’s updated official cash rate (OCR) projections.July decision points to willingness for more tightening

At its latest gathering, the RBNZ decided to deliver its third double hike, taking the number of consecutive liftoffs since it began this tightening cycle to six. The Committee agreed to continue lifting the OCR to a level where they are confident that inflation will settle within the 1-3% target range, staying comfortable with the rate path outlined in the May Monetary Policy Statement (MPS).

Although there was some speculation beforehand that the Bank could soften its rhetoric due to deterioration in businesses and consumer confidence, and an accelerating decline in house prices, the minutes revealed that household spending has remained resilient and that rising mortgage rates will help take house prices to more sustainable levels.

What is the data saying?

Since then, data showed that New Zealand’s CPI accelerated from 6.9% YoY to 7.3% in Q2, the fastest pace in three decades, allowing some market participants to add a few bets with regards to a 75bps liftoff. The unemployment rate ticked up just a tenth of a percentage point above its Q1 historic low of 3.2%, while the Labor Costs Index accelerated to a 14-year high of 3.4%. 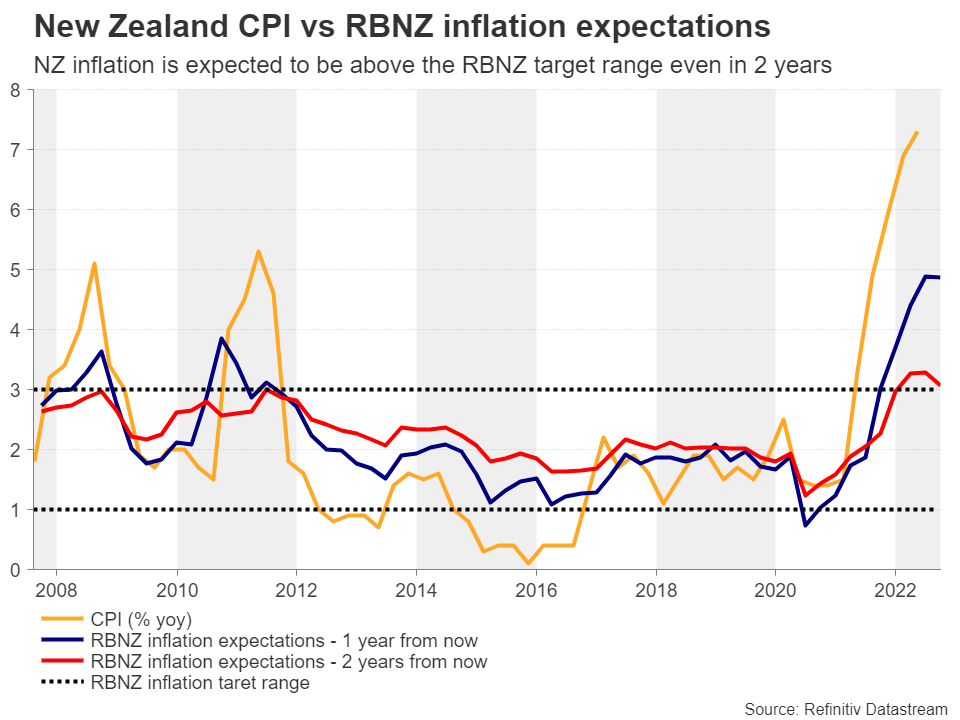 Although this may have widened the smile of those betting for a triple hike, yesterday, the Real Estate Institute of New Zealand said that house prices fell 2.8% more in July compared to June, recording their first annual fall since 2011. Also, let’s not forget that the whole economy of New Zealand contracted in Q1, albeit marginally.

What does the market expect and how could it respond?

Thus, the latter data does not add credence to the idea of a triple hike, but it does not suggest that the RBNZ could turn dovish either. Indeed, market pricing implies a 12% chance for a 75bps increase, but the remaining 88% is assigned to another 50bps one. After all, officials already had the Q1 GDP data in hand when they made their minds in July, while a 1.6% YoY slide in house value may not be as concerning as a 7.3% YoY inflation rate.

A fourth double hike will not come as a surprise and is unlikely to be the reason for any reaction in the kiwi. Participants may quickly lock their gaze on the accompanying statement and especially the new projected path of the OCR. According to the May MPS, the OCR is expected to top at 3.95 in Q3 2023, with a 25bps fully priced in Q1 2025. On the other hand, the financial community sees faster hikes in the short run, expecting the same peak in April 2023, but they also expect rates to start falling just thereafter. 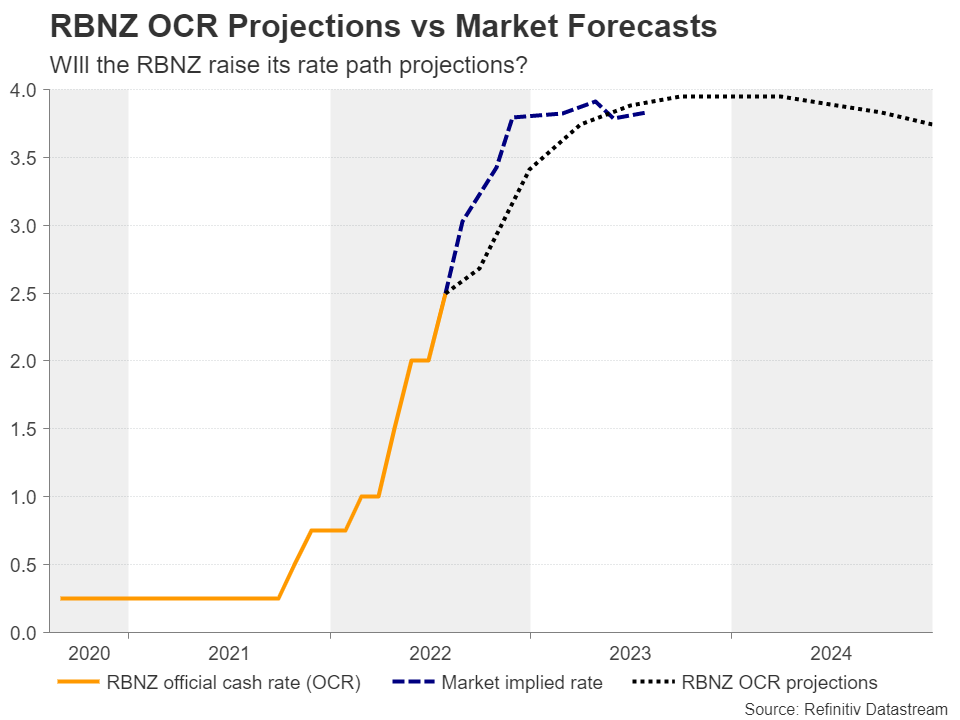 Thus, for the New Zealand dollar to extend its latest recovery, the RBNZ may need, not only to bring forth its rate path projections, but to also keep the timing of when it expects rates to start falling beyond that implied by the market. With the Bank itself expecting inflation to be around 4.9% YoY one year from now, and still above the upper end of its 1-3% target range in two years, that scenario appears to be very likely. Kiwi/dollar could extend its latest recovery and perhaps challenge the 0.6565 zone, marked by the peaks of May 5 and June 3. A break higher could send it towards the 0.6720 zone.

For a decent retreat to be signaled, the Bank may have to bring forth the timing of when it expects to start cutting rates and/or signal a lower peak. This could take the kiwi below the key 0.6360-dollar mark, allowing a dive towards the 0.6210 support, the break of which could set the stage for the 2-year low of July 14, at 0.6060.