After the Fed’s abrupt but not totally unexpected hawkish turn, the supercharged US dollar will be hoping for another shot in the arm from next week’s PCE inflation data. Meanwhile, the flash PMI readings for June will be making the rounds in all the major markets. The forward-looking PMI surveys could further bolster tapering speculation – not just for the United States but elsewhere too – as economies around the world reopen with the help of ramped up vaccinations. In the central bank sphere, the Bank of England is next to set policy. However, fresh policy signals are unlikely before the August meeting so the pound may have to wait a little longer before taking on the recrowned king dollar. Dollar biggest winner after hawkish FOMC as yields fall back

The June FOMC meeting turned out to be quite a decisive one for the greenback but whether anything has changed palpably for the markets is questionable. The fact is, there were a number of hints by Fed policymakers in the runup to the meeting that the time to start talking about tapering may be nearing and the consensus view of when policy tightening would begin had long been forming around September, and that has not changed.

That said, the hawkish shift was unmistakable as FOMC members pencilled in not one but two rate hikes for 2023, having only in March predicted that they would stay on hold through the year. More concerning is that Fed Chair Jerome Powell is no longer so sure that the spike in inflation will be transitory.

However, although Treasury yields shot up after the meeting, they had fallen excessively in the prior days and the 10-year yield has only managed to return to the range it had been consolidating in for most of April and May. The more notable impact has been on the dollar, which had been slowly creeping higher since late May, only to be held back by the baffling slump in yields. But now that yields have bounced back, there’s nothing stopping the dollar from powering ahead.

The only problem, though, is that the rebound in Treasury yields has already started to falter and bond traders may need further convincing that the risk of a much more hawkish Fed is real, otherwise, the dollar’s upswing may not be sustainable.

Will PCE inflation give markets a fright?

Next week’s Bureau of Economic Analysis report on personal income and spending, as well as the PCE price indices, might go some way in adding more impetus to the bond selloff. The core PCE price index – the Fed’s preferred inflation gauge – is expected to have jumped from 3.0% to 3.5% year-on-year in May. That is far above the 2% goal but not as shocking as the CPI print of 5%. The month-on-month rise is forecast at 0.6%, which is even more worrying. 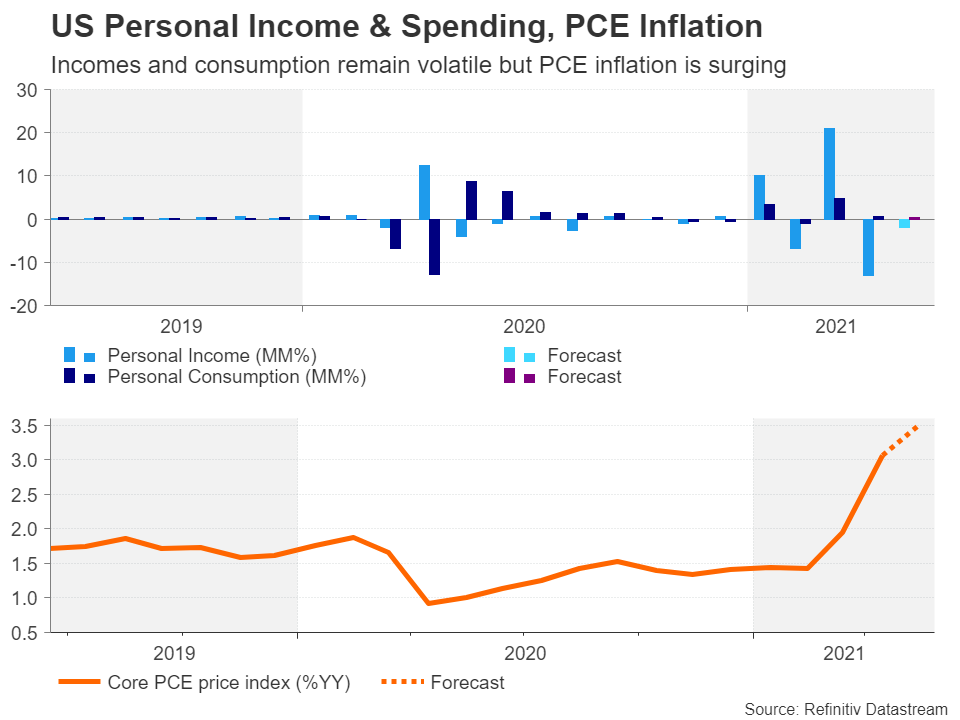 Part of the reason behind these upward price pressures is the consumption boost from the fiscal stimulus and pent-up demand. The Fed is hoping that these effects will fade over time but is no doubt keeping a close eye on the personal income and consumption numbers.

Personal income is projected to have declined by 2.0% m/m in May, while consumption was likely 0.4% higher.

Other data to watch out of the US next week are existing home sales on Tuesday, new home sales and the flash PMIs on Wednesday, as well as durable goods orders and the final GDP estimate for Q1 on Thursday.

Bank of England meets but might stay mum on tapering

Across the Atlantic, the pound will be seeking to reverse its fortunes after a bruising week for cable. Traders can look forward to the UK flash PMIs on Wednesday and the Bank of England policy meeting on Thursday for some fresh upside. The preliminary PMIs for June will be interesting as they could point to the recovery in both the services and manufacturing sectors easing slightly as the reopening effect subsides somewhat, although warmer weather might have kept the spending frenzy going.

Not a lot new is expected from the Bank of England, however, as this will not be a Super-Thursday meeting so there will be no press conference or updated economic forecasts. The Bank will probably wait till its August gathering before deciding whether to further slow down its bond purchases and signal a potential extension of QE beyond the end of 2021. But there could be some surprises. 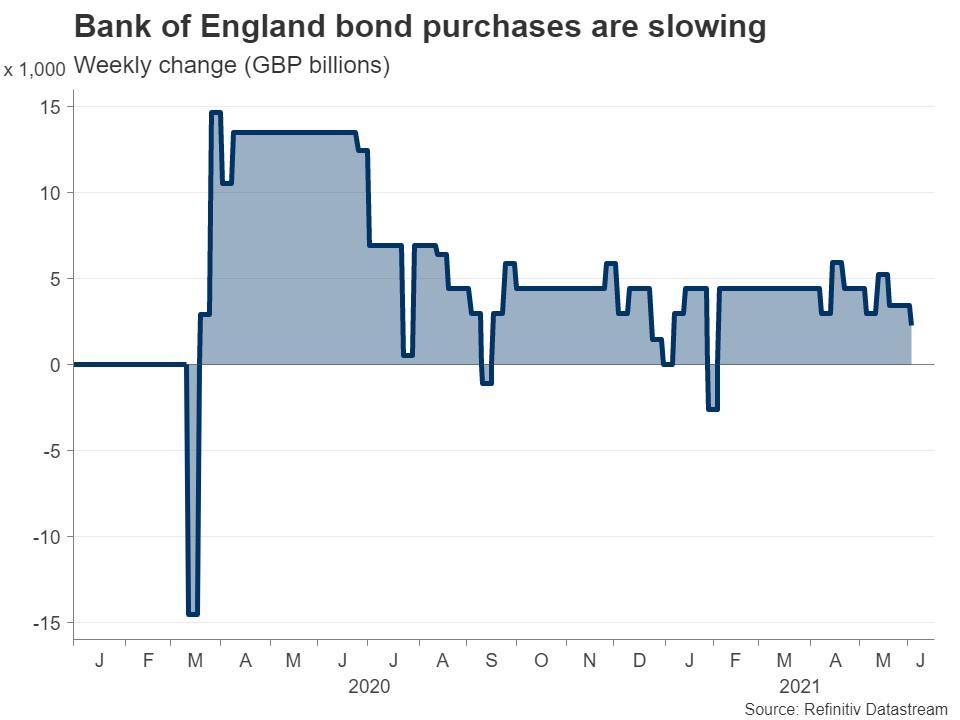 Should policymakers tweak their language on the inflation and growth outlooks, acknowledging the recent strong CPI and GDP data, investors might read it as a sign that the Bank is moving closer to making a formal taper decision, which could give sterling a bit of a lift.

The euro took an even bigger battering than the pound from the Fed’s hawkish lean as the European Central Bank recently swayed in the opposite direction and could therefore be last from the major central banks to exit from its pandemic stimulus policies.

Still, there could be some love for the single currency on Wednesday from the latest PMI reports. The manufacturing PMI is expected to soften marginally to 62.1 in June, having set record highs in the past three months. But the services PMI is forecast to continue climbing in June, hitting 57.6, as many Eurozone countries are slightly behind the US and UK in lifting restrictions and are only now relaxing their social distancing rules. 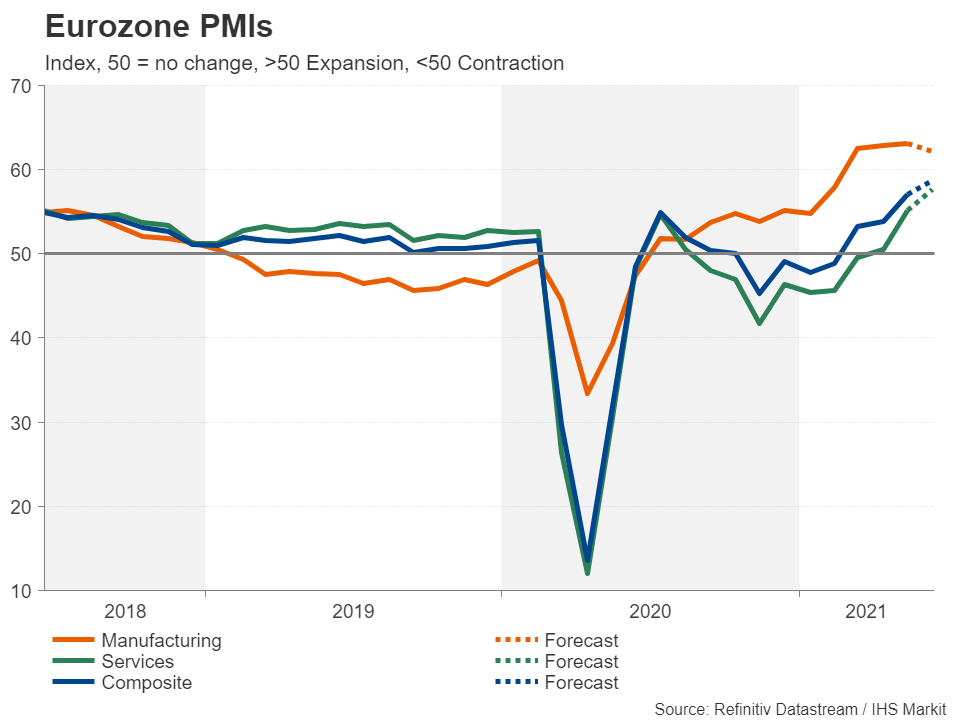 On Thursday, the Ifo business climate gauge out of Germany is expected to paint a similarly rosy picture for June.

However, another set of robust survey showings might not necessarily be significant enough to bolster the euro given the growing divergence in monetary policy between America and Europe. After plunging below $1.20 in the aftermath of the Fed meeting, it will be difficult for euro/dollar to reclaim the psychologically important handle solely on the back of some upbeat data.

Flash PMI numbers are due in Australia and Japan as well on Wednesday, while preliminary retail sales figures for May will also be on the aussie’s agenda on Monday.

The Australian dollar has been no exception in being kicked down by the resurgent US dollar and after a markedly stronger-than-expected jump in employment failed to provide much support, next week’s releases are not anticipated to relieve the currency’s downside either.

The loonie is in a similar predicament and Wednesday’s retail sales report out of Canada will probably do little in undoing some of the past week’s losses.