After plenty of excitement from central banks and top-tier economic releases in the past couple of weeks, things will take a backseat over the next seven days. The slower news pulse could give way to some sideways action in currency markets as the US dollar fights off selling pressure. A more cautious mood on Wall Street could assist dollar bulls as stocks tend to perform poorly in May. There could be a further boost for the greenback coming in the form of the latest US CPI and retail sales numbers. The pound, meanwhile, which remained largely unruffled by the Bank of England’s decision to slow down QE, will be looking to UK GDP and Scottish elections results for direction.The waiting game

The virus landscape around the world keeps changing continually, compelling a constant rethink by investors as the outlook brightens up in one part of the world but deteriorates rapidly in another. However, the central narrative that stimulus and vaccines will eventually pull the global economy out of the pandemic hole hasn’t changed. More importantly, most of the good news is priced in right now and although worrying virus headlines are only temporarily setting back risk appetite, there seems to be a clear lack of new drivers in the markets lately.

This was evident by the relatively modest lift to stocks by the string of record-busting earnings announcements on Wall Street this season. Bond markets have also been fairly steady as the Federal Reserve has repeatedly stressed that now is not the time to talk about tapering. Eurozone bond yields have stood out, however, climbing to fresh highs. But this could be interpreted as a bit of catch-up and euro/dollar dynamics haven’t altered considerably.

The big question now is, are traders simply standing by, waiting for the next major trigger to rekindle the risk rally, or are they biding their time until the Fed signals its first tapering move?

Inflation and retail sales to be eyed in America

US data certainly suggests it’s only a matter of time before the Fed finds itself in a spot where it can no longer justify its colossal monthly pace of $120 billion in bond purchases. Next week’s indicators are likely to further raise question marks about the Fed’s ultra-dovish stance. The consumer price index is out on Wednesday and expectations are that the 12-month rate jumped by one percentage point to 3.6% in April. The increase in the core rate is anticipated to have been more moderate, from 1.6% to 2.6%. 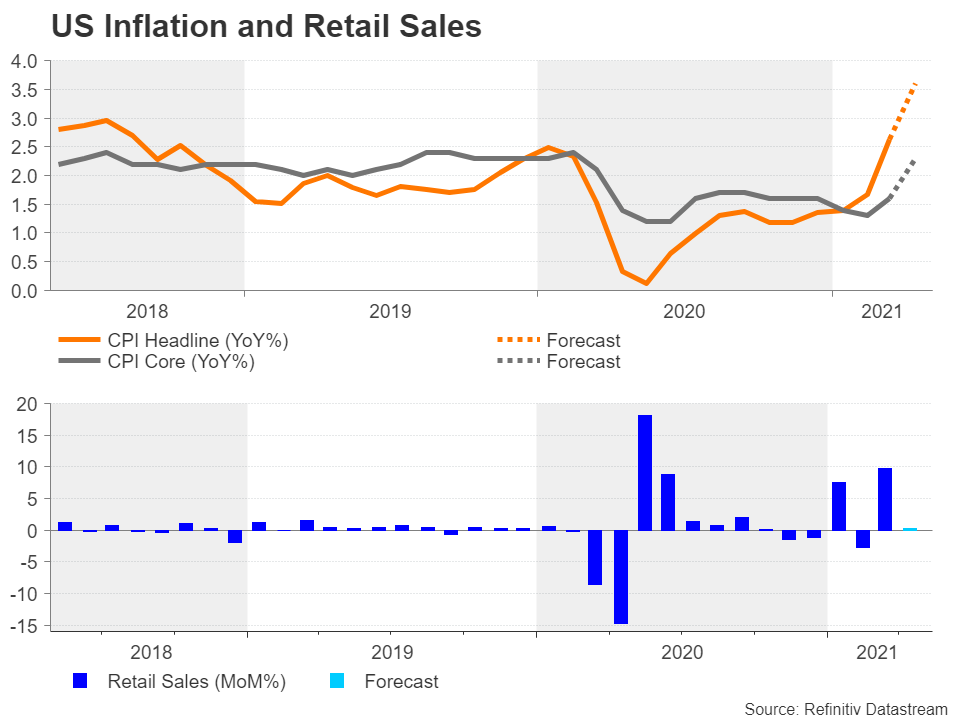 Policymakers are for the time being ignoring this surge as much of the rise in annual inflation is down to the low base effect of 2020 when prices slumped at the onset of the pandemic. However, if price pressures don’t begin to ease in a few months’ time, the response from both policymakers and investors alike won’t be quite as muted.

Producer prices will follow on Thursday before a final flurry of data rounds up the week on Friday, consisting of retail sales, industrial production and the University of Michigan’s preliminary consumer sentiment survey.

Retail sales soared by almost 10% on a monthly basis in March as American consumers were handed an extra $1,400 in pocket money. However, the stimulus boost is already expected to have faded in April and retail sales are projected to have grown just 0.2% m/m. Industrial production is forecast to have increased for the second straight month, while the University of Michigan’s consumer sentiment gauge probably rose to a fresh one-year high in May.

If the data are broadly stronger than expected, particularly the inflation and retail sales figures, Treasury yields might receive a nudge up, having drifted lower over the past 10 days. This could bolster the dollar index above major resistance in the 91.40 region. However, if the incoming numbers don’t bring anything new to the picture, more consolidation could be in order. 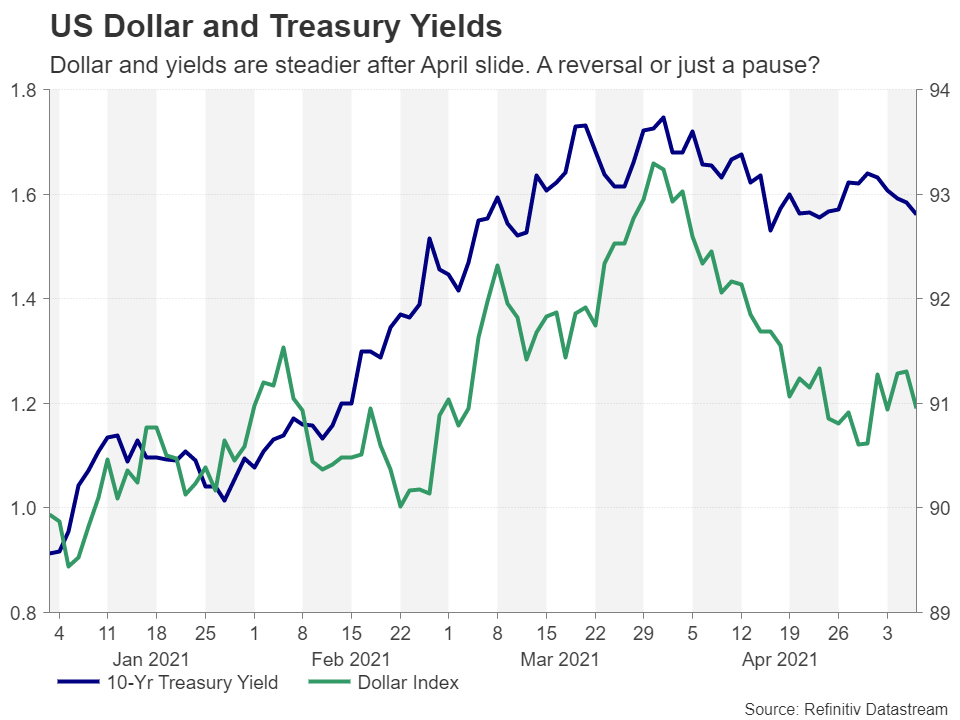 Will ECB minutes stir things up for the euro?

A sideways market would make it difficult for the euro to resume its uptrend in the near term, though it could also shore it up above the $1.20 level. There’s not much on the European agenda next week that could be a game changer for the single currency. The only notable releases are the ZEW economic sentiment index out of Germany on Tuesday, and the final Eurozone CPI prints for April along with the industrial production figures for the bloc on Wednesday.

However, the European Central Bank’s latest meeting minutes could invite some volatility on Friday. The ECB eased concerns at the April policy meeting that its hawkish members were pushing for a sooner rather than later withdrawal of the emergency stimulus, but Eurozone yields kept rising and only pulled back at the start of May. The minutes are not anticipated to disclose any fresh revelations but nevertheless, any views that are less or more dovish than expected could jolt the euro. 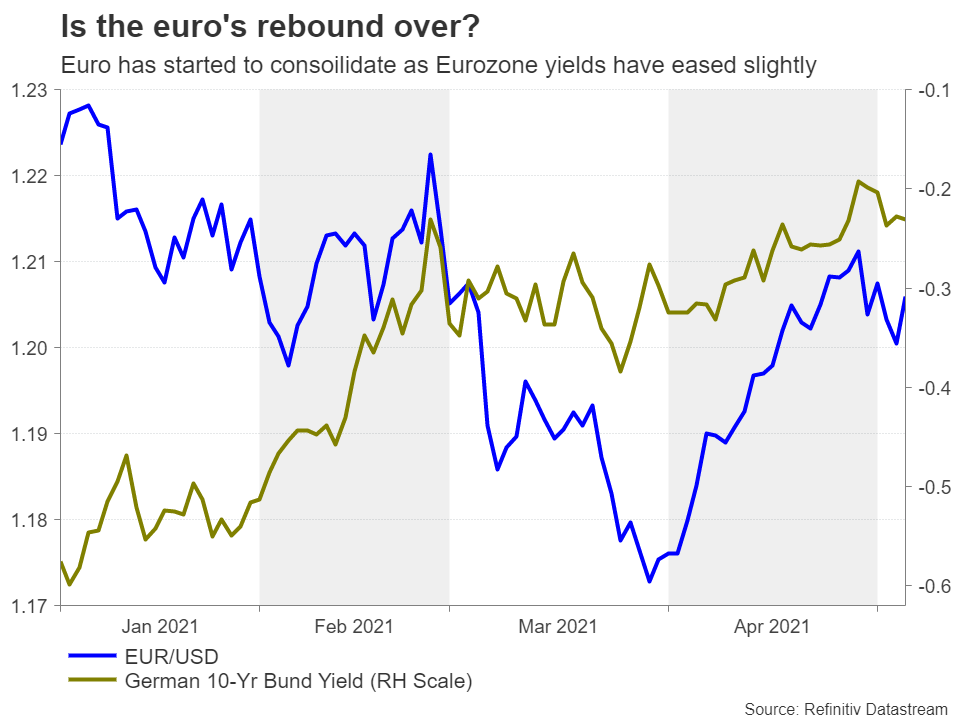 The Bank of England took its first step in exiting from its pandemic quantitative easing programme on Thursday, announcing that it will reduce its weekly purchases of gilts, making an extension less likely when the current round ends around the turn of the year. But the pound barely budged as the BoE has not shut the door to further QE and there was nothing alarming about its inflation forecasts to frighten markets either.

There was also little reaction to the rosier growth projections and so Wednesday’s GDP growth figure for the first quarter might also go unnoticed. The UK economy is expected to have shrunk by 1.8% between January and March when much of the country was under tight lockdown. Markets will probably see this as old news, though the March breakdown on economic output might attract a bit more interest as some restrictions had started to be loosened. 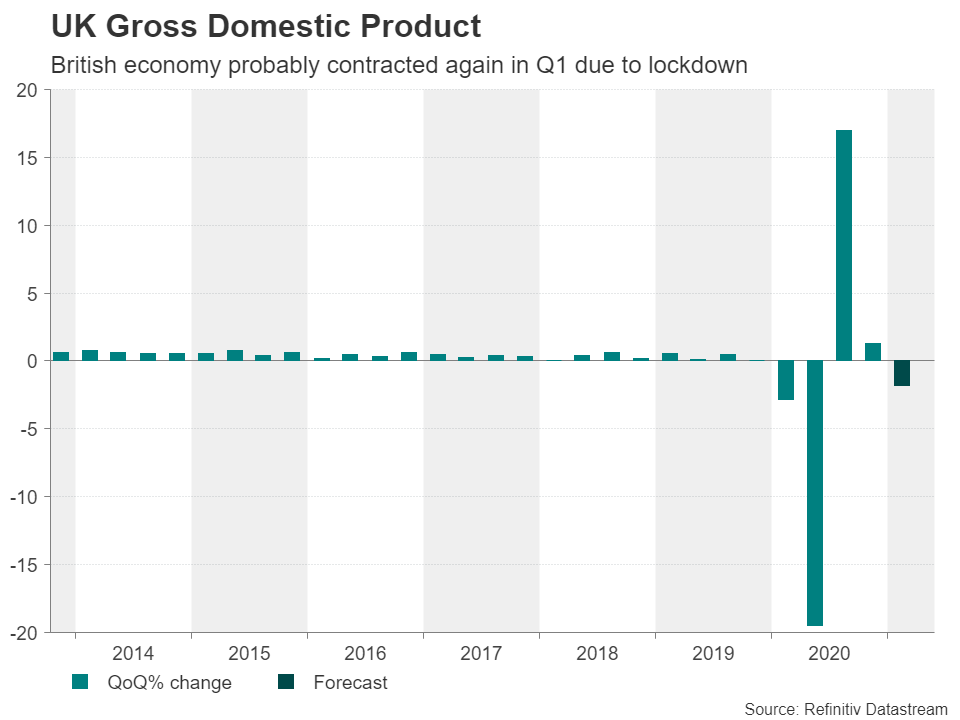 A more important matter for investors will be the results of the Scottish election, which are due over the weekend. Early results show Boris Johnson’s Conservative party gaining local council seats in England, but it is the Scottish National Party that dominates the Scottish Parliament and a majority for them would put a referendum for Scottish independence back on the table. The pound could take a hit if there are strong gains by the SNP and other pro-independence parties.

Risk sentiment, China in focus for the aussie

The Australian dollar has been struggling to make much headway against the greenback since March. Skyrocketing metal prices and a strengthening Australian recovery have not been able to lift the aussie above the February peak of $0.8007 as the RBA has successfully kept a lid on the 10-year AGB yield. The final retail sales estimate for March is the only key data out of Australia next week and is unlikely to draw much attention. Hence, the aussie will mainly be driven by risk sentiment, as well as any updates on Sino-Australian trade relations.

China has just announced it is suspending an economic dialogue to deepen ties with Australia in retaliation to Canberra’s decision to ban Huawei from Australia’s 5G network and to call for an investigation into the origins of the coronavirus. After a knee-jerk dip, the aussie bounced back from the headlines but any follow-up measures from Beijing could have a bigger impact.

In China, another jump in the producer price index in April could fuel fears of higher inflation on Tuesday and in New Zealand, electronic card retail sales for April will be watched on Wednesday for a further rebound in consumption after a sluggish start so far to 2021.

The New Zealand dollar has fared somewhat better than its aussie cousin in recent weeks, but its progress will too depend on which way the US dollar turns next.