Will Disney’s Q1 earnings make it or break it? - Stock Market News

Disney is set to unveil its first fiscal quarter earnings results for 2022 on Wednesday, February 9, after Wall Street’s closing bell. The House of Mouse is expected to record a stellar, double-digit year-over-year growth. However, investors will once again shift their attention to streaming subscriber growth, hoping that better-than-expected net additions could revive Disney’s share price.It’s all about subscriptions

Disney’s stock took a major blow after its last earnings release due to the disappointing net subscribers growth. This was attributed to pandemic-related production headwinds, which hindered the company’s ability to add new content on its streaming platform. Moreover, Disney’s stock tumbled by 7% in the aftermath of Netflix’s earnings release, as investors fear that its streaming service might also report a slower user base expansion. 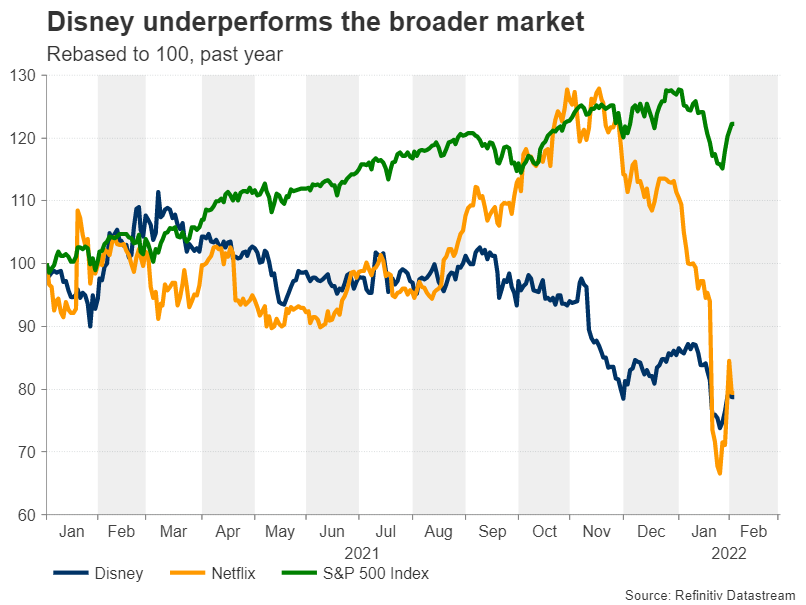 In just two years from its launch, the company’s flagship streaming service Disney+ has managed to reach 118 million users, which together with its other two streaming services - ESPN+ and Hulu - gives it a total subscriber base of 174 million. During the last earnings call, Disney’s CEO maintained the target for 230 to 260 million users by 2024, stressing that the path towards this goal might not be linear. Those comments were interpreted by investors as a sign for weaker additions in the short-term.

Therefore, in the upcoming earnings release subscriber growth will once again take centre stage, with investors looking for 8.5 million additional users for the quarter. A weaker-than-expected reading could weigh on the company’s share price, but it is not expected to derail its long-term prospects due to Disney’s deep pool of content, which is expected to double throughout 2022.

The House of Mouse direct-to-consumers (DTC) streaming service has undoubtedly witnessed an impressive growth over the past few years. Currently, Disney+ is only available in 64 countries, with the company planning to expand in over 160 countries by 2023. This scale up could open the door for millions of new potential clients, acting as a major tailwind for Disney’s streaming segment.

The company has also closed major sport’s agreements, with the most prominent being the 10-year NFL and the 7-year NHL rights deals. Those contracts are expected to make ESPN+ streaming platform the perfect complement for Disney’s ESPN linear network, further increasing its future total subscribers base and profits. 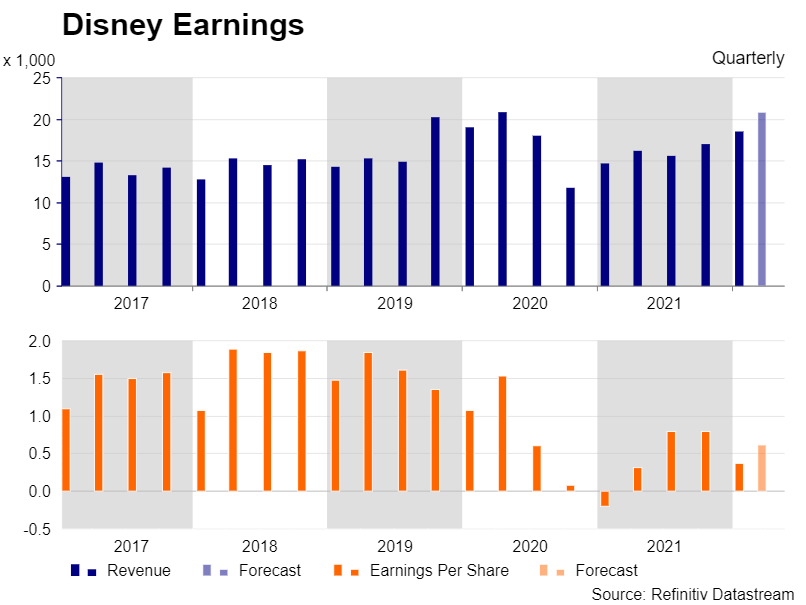 A big jump in earnings in sight

According to Refinitiv estimates, analysts are targeting $20.9 billion in revenue and $0.62 in earnings per share for the first fiscal quarter, marking a 28.7% and 95.1% year-over-year growth, respectively. However, even if such stellar results materialize, a potential weakness in subscription numbers could disappoint the optimist, applying downward pressure on Disney’s stock price.

Disney’s parks and resorts were severely affected since the dawn of the pandemic. Throughout 2021 the parks and resorts segment was operating at a reduced capacity, reporting an operating income of $471 million for the 2021 fiscal year compared to $6.67 billion in 2019. Therefore, the current economic reopening is expected to bolster the segment’s revenues by 76.1% on a yearly basis during the upcoming earnings report.

However, the ongoing tight labour market in the US, which could translate into higher staff wages for Disney might put a cap on the sector’s operating income, leaving scope for lower-than-expected quarterly performance. Moreover, the cyclicality of the company's parks and resorts leaves them exposed to external downside risks, such as a new covid-19 variant, which apparently held back economic activity at the turn of the year. 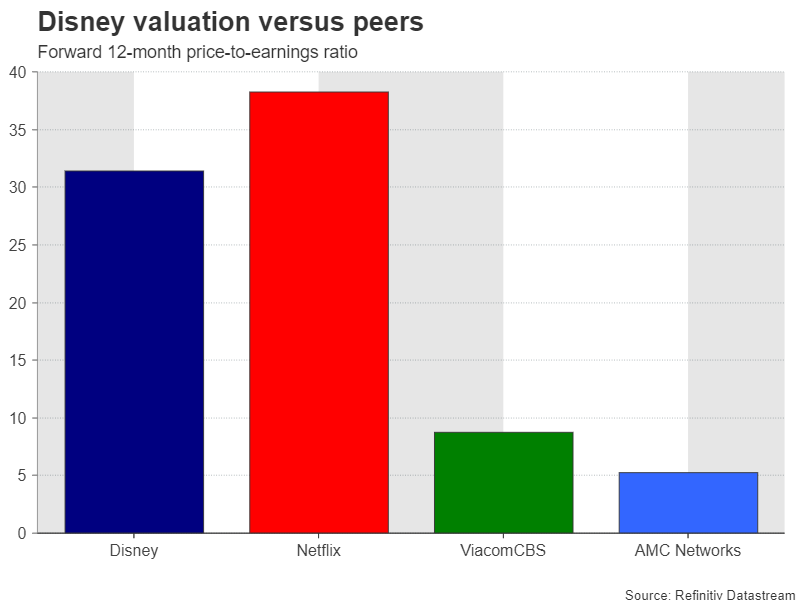 Is Disney a long-term play?

From a valuation perspective, Disney has a hefty forward price to earnings ratio of 32.2, which denotes the dollar amount someone would need to invest to receive back one dollar in annual earnings. Despite trading at a discount compared to its major competitor - Netflix - its price-to-earnings ratio is still much higher from its other peers, reflecting the company’s long-term prospects and its strong stance in the global entertainment business.

The company is currently trading by almost 30% below its all-time high, with bulls hoping that a strong subscriber growth number could alleviate much of the 'pain' witnessed over the past year.

Taking a technical look at its stock, better-than-expected results might push the price above the 142 hurdle, paving the way towards its 50-day simple moving average (SMA), currently at 149. To the downside, should the numbers come out worse-than-expected, the bears might send the price to test the 129 obstacle.