The Bank of Canada (BoC) is widely expected to kick off the new year with a rate hike on Wednesday despite its muted communication over the past weeks. With inflation well above the central bank’s target and the labor market running hot, a rate increase could be justified. That said, investors are already positioned for the announcement and the central bank will need to provide extra hawkish signals to cancel the latest pullback in the loonie. The decision will be published at 15:00 GMT.Canadian inflation could get worse

Investors are fully convinced that the Bank of Canada will be the first major central bank to raise its interest rates by 25 basis points this year, and there is no fundamental excuse to entirely exclude that scenario. The headline CPI inflation unlocked a fresh 30-year high of 4.8% y/y in December, gently higher than the previous reading but still above the central bank’s range target of 1-3%. 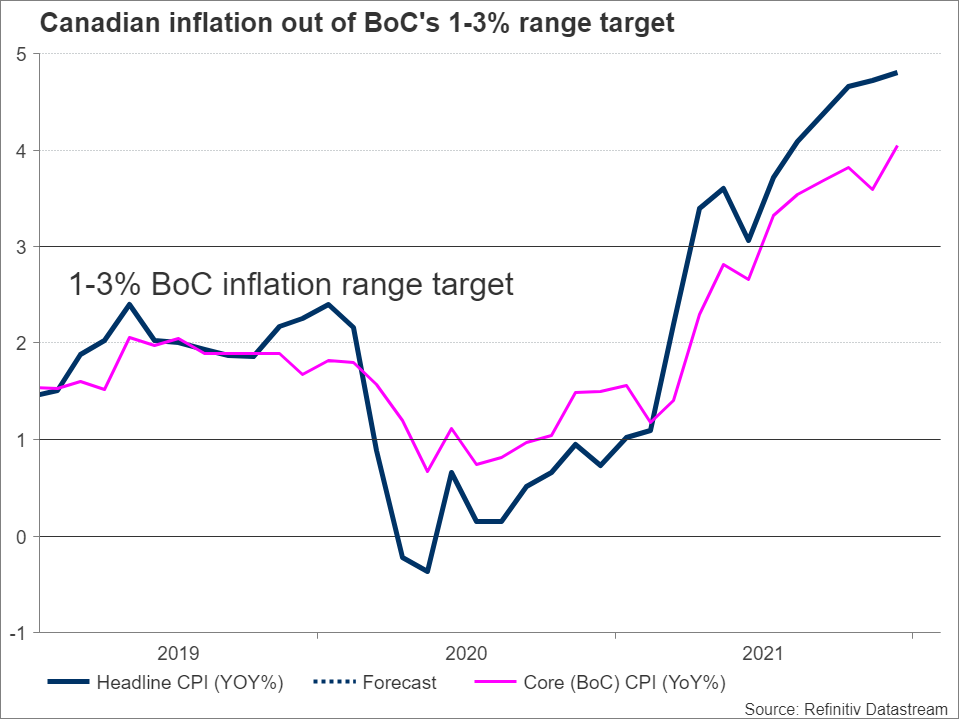 While the rapid pickup in food prices was the key driver behind the boost, the core measures, which exclude volatile components, also climbed to a fresh high, flagging that inflation is probably broadly spreading in the economy. On top of that, the Canadian Real Estate Association revealed that house prices rose for the year at a record rate of 26.6% in the same month, while the central bank’s quarterly business-outlook survey indicated last week that companies are thinking to raise wages at a faster pace than during the past year to make up for the labor shortages and maintain the existing workforce. Strikingly, they are also considering passing through to consumers the increased costs of additional investment they are preparing to undertake to meet domestic and foreign demand.

A rate hike is on the map

Hence, given the joint agreement with the government, which renewed the 2.0% midpoint inflation objective for the next four years to 2026 last month, the BoC may need to abandon its stimulus settings sooner than its US counterpart, which has switched to a more flexible average price targeting.

The central bank has already ended its quantitative easing program, and it’s currently in a reinvesting phase in which it buys only the amount of bonds needed to replace the maturing ones.

It has also moved its timetable for its first rate hike forward to April, but since the omicron variant is not threatening additional lockdowns and the economy continues to create new job positions, pressing the unemployment rate to 6.0% as of December, the central bank may not wait that long.

How could the loonie react to the BoC announcement?

Turning to FX markets, the question that arises at this point is how the loonie will react if the BoC listens to market expectations and delivers a rate hike earlier than its forward guidance suggested during the previous meeting. Investors are certain that a rate increase will take place this week. Therefore, the announcement itself may not be surprising, likely doing little to cancel the loonie’s latest pullback against the US dollar, unless the central bank upgrades its economic forecasts and provides further reasoning to speed up its rate hike plans. Note that futures markets foresee six more rate hikes to come till the end of the year. Any statements embracing further monetary tightening in the year ahead could sink dollar/loonie towards the 200-day simple moving average (SMA) at 1.2500, while a deeper decline may reach the former 1.2430 support region.

On the other hand, the BoC tends to follow the Fed’s steps and not the opposite, and that is feeding some doubts about whether policymakers will be patient, waiting for more data evidence in the next few months to confidently support any rate rise. 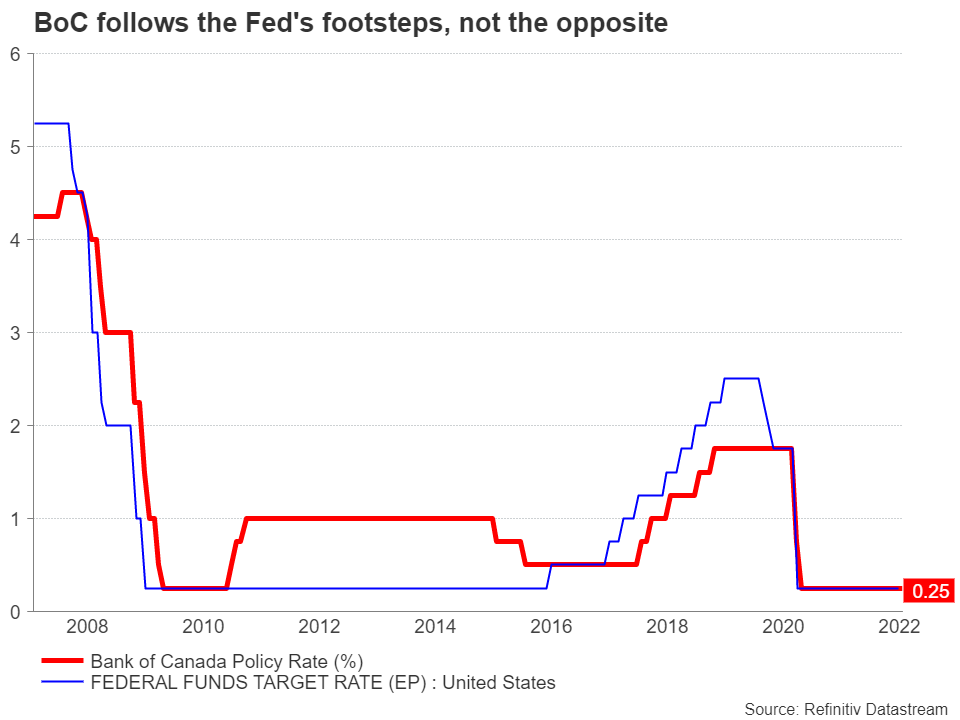 Should the central bank hold back, disappointing the crowd of investors who are currently betting for higher rates, dollar/loonie could aggressively head towards the key resistance of 1.2700 and then gear up to meet the next barrier at 1.2830. Yet, whether such a rally could be sustained remains to be seen as pandemic-led supply crunches may keep oil prices elevated, overshadowing negative forces in the oil-dependent loonie. The Fed’s policy announcement later on Wednesday could also impact the pair.