Risk sentiment is wavering as investors are constantly evaluating the likelihood of a recession. The flash PMIs for May might help guide those expectations in the coming week. In the US, there will be plenty of additional drivers for the dollar, such as the FOMC minutes and the PCE inflation readings. Markets remain fixated on seeing peak inflation so any trace of this might help calm nerves. In the world of central banks, the Reserve Bank of New Zealand is expected to hike interest rates again.US economy under the spotlight amid recession risks

There’s been a lot of talk about a recession in Europe but less so for the United States. But reality might be catching up with the markets, which until now, were confident that the American economy is robust enough to evade a sharp downturn. This sudden switch to a bleaker outlook has knocked down the US dollar and pushed Wall Street back into the red.

With quite a lot to choose from on the US calendar next week, senses will be heightened as investors will be on the lookout for recession warnings.

Kicking things off on Tuesday, the flash PMIs by S&P Global will be watched for signs that any part of the US economy began to struggle in May under the weight of soaring prices, higher borrowing costs and growing global uncertainties.

New home sales for April are also out on Tuesday, and durable goods orders will follow on Wednesday. On Thursday, the second estimate of first quarter GDP growth is due alongside pending home sales.

But stealing the limelight will be Friday’s releases, which include personal income and consumption, as well as PCE inflation. Both incomes and spending are expected to have grown at healthy clips in April. So attention will mainly fall on the core PCE price index as speculation builds that inflation in the US is at a turning point. 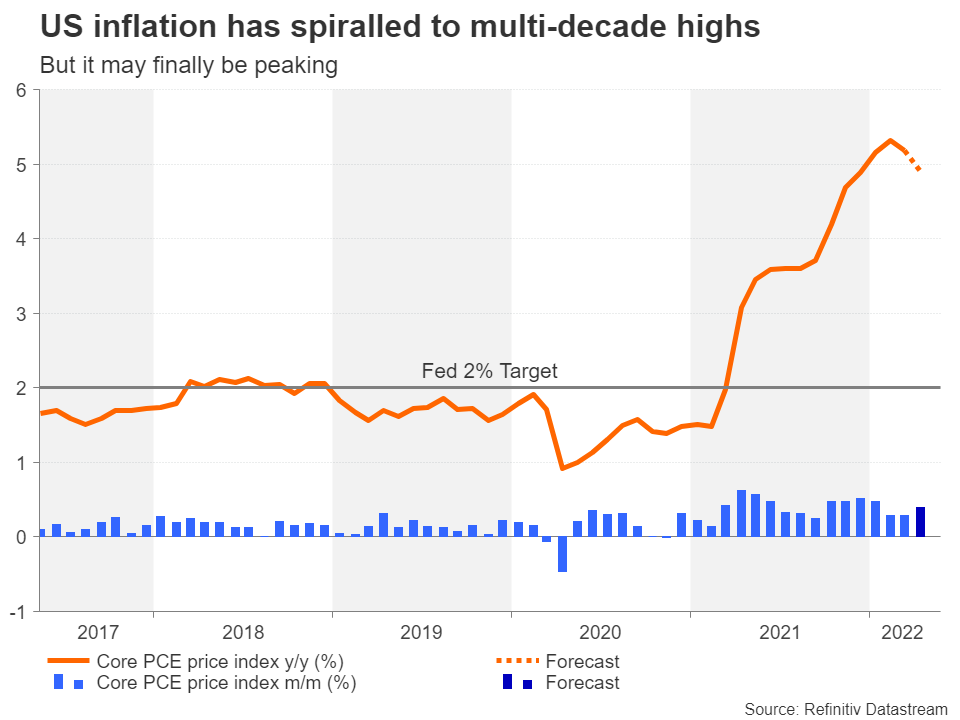 The Fed is hoping that inflationary pressures will subside soon, allowing it to stop front loading rate hikes. Any views on inflation possibly peaking soon will be scrutinized in the minutes of the May FOMC meeting that will be published on Wednesday.

Overall weak figures could intensify the dollar’s pullback but there are upside risks too, both from the economic activity gauges as well as the price data.

There can be no doubt that the European Central Bank and Bank of England are in the most dreaded spot policymakers can find themselves in. The ECB is about to do the unthinkable and abandon its policy of negative rates, possibly tipping the euro area into recession, while the BoE is desperately trying to avoid hiking rates by 50 basis points even though it might not have much choice after UK inflation jumped to 9% in April.

However, with so much doom and gloom in the markets lately, investors may be overlooking some of the positives. For example, the Eurozone economy is still benefiting from the reopening phase post-Omicron and consumers in the UK might not have completely given up on splurging as the labour market is tight. 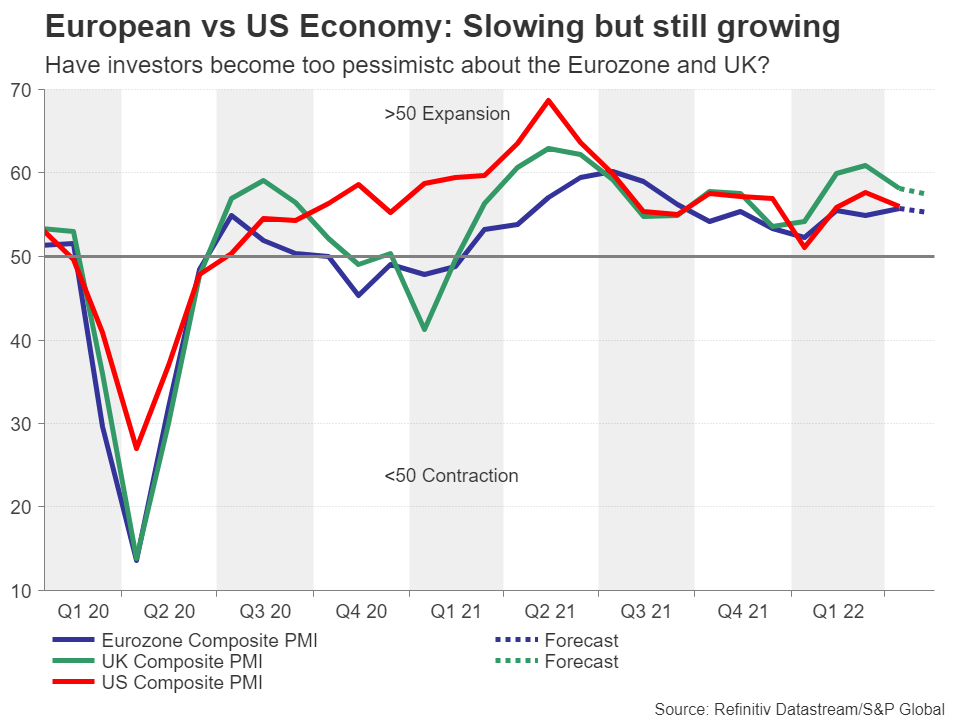 Hence, the euro and pound could enjoy a small boost if Tuesday’s flash PMIs for the Eurozone and UK are a bit better than expected. In Germany, traders will additionally be able to parse the Ifo business climate survey on Monday.

Moreover, reasonably good PMI prints could buoy the broader market mood amid the elevated risk of stagflation that’s weighing heavily on risk assets at the moment.

The Reserve Bank of New Zealand is the only major central bank that holds a policy meeting next week and is poised to tighten for a fifth time in as many months. Analysts are expecting policymakers to stick with the 50-bps increment of the last decision, lifting the cash rate to 2.0% on Wednesday.

Bets for a double hike were solidified after the release of the RBNZ’s latest inflation expectations survey. However, the report was not entirely alarming. Although one-year inflation expectations kept rising, reaching 4.9%, two-year expectations appeared to be steadying just under 3.3%. It’s possible therefore that policymakers might hint at a slower pace of rate increases after the May meeting.

A day earlier, traders will be keeping an eye on the retail sales numbers for the first quarter. The New Zealand dollar is vulnerable to more selling pressure if the data doesn’t impress and the RBNZ slightly tones down its hawkish rhetoric.

Can data provide the aussie with the lift it needs?

In neighbouring Australia, the Reserve Bank there has only just gotten started with its tightening cycle and the size of the rate increase in June is still up for debate. Following the broadly positive jobs report for April, the flash PMIs due on Tuesday could further bolster the case for a rate hike larger than 25 bps in June if they indicate that business activity was little dented in May from rising cost pressures and the lockdowns in China.

On Wednesday and Thursday, the focus will shift to first quarter data on construction output and capital expenditure respectively, and preliminary retail sales numbers for April are out on Friday. Business spending had weakened substantially in the second half of 2021 due to Omicron, so a strong pick up in the first three months of the year would signal that the recovery is now on a much more solid footing. 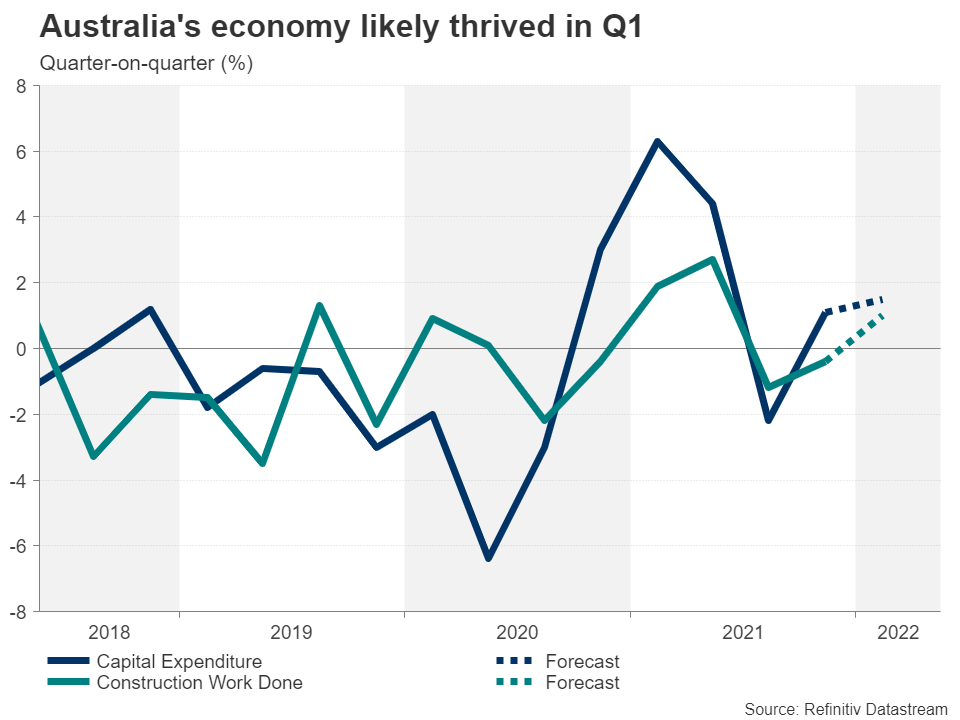 The Australian dollar is struggling to convincingly reclaim the $0.70 handle following a six-week-long slide against the greenback. An upbeat set of figures could provide it with the leg up that it needs. However, at the start of the week, the aussie could be jolted by political risks. Australians go to the polls on May 21 to vote for a new government. If incumbent Prime Minister Scott Morrison’s Liberal-National coalition loses to the opposition Labor Party, the local dollar could slip against its main rivals.