Italian election: Will a far-right victory hurt the euro?

Italy will head to the polls on September 25 amid the painful energy crunch. The political landscape in the third largest EU economy has been notoriously unstable and it might enter a new era of uncertainty during the next few months, as the far right is largely expected to come into power for the first time after a century. The winning alliance, however, may find its hands tied in delivering an ambitious fiscal plan, keeping debt risks in the shadows, at least in the short term.Right-wing parties lead the polls

The appointment of the popular and former ECB chair Mario Draghi as the new Italian prime minister raised a feeling of political stability back in 2020. That’s right, in Italy it is not strange to elect a prime minister who is not a leader of a party or a member of Parliament.

Leading a three-party coalition composed by the centre-right Forza Italia, the far-right League, and the populist Five Star Movement, the technocratic caretaker ‘super Mario’ managed to secure the largest slice of the EU recovery fund of around 200bln euros during the pandemic.

But like so many before, he could not preserve his crown for long despite the international respect for him. Skyrocketing consumer prices following the war in Ukraine saw the unity collapsing within the coalition, with the Five Star Movement opposing Draghi’s generous economic package and then snubbing him during a confidence vote along with the remaining coalition members.

Georgia Meloni, the leader of the hard-right and national-conservative party Brothers of Italy, is now the favorite candidate to replace Draghi and govern the country with Berlusconi’s Forza Italia and Salvini’s hardline League. Well, the truth is that despite her 20 years of experience in politics, her party, which is a postwar predecessor of the neo-fascist Social Movement, has only managed to boost its appeal after 2018, surging from 4.0% of the vote to top the Democratic party at 25% according to the polls. Also, her coalition wouldn’t have been successful in boosting its popularity to 48% of votes if the centre-left had not been fragmented in the first place.

The rise of the far right has been considered a threat to the European Union for some time now, especially after the migration flows started to ramp up a decade ago. Meloni is well known for her national and Eurosceptic ideologies, and although she has distanced herself from neofascism, her slogan of “Less Europe, but a better Europe”, as well as her close relations with Hungary’s nationalist leader, is feeding quite a bit of anxiety about renewed political tensions within the EU.

Particularly, investors are concerned whether Meloni and her partners will jeopardize the terms that Italy committed to undertake under the recovery fund after claiming that the plan is targeting areas that Italy is not competitive. She later tried to calm down those worries, expressing her support to European policies, though she will have to bring her coalition partners on her side too in order to be more convincing. Recall that Salvini attacked the deal too, citing the risks that reforms under the agreement could cause on pensions and welfare. His unstable relations with Meloni are already questioning the coalition's future, but he will probably prioritize an election win for now, providing his support in Parliament along with Berlusconi.

Note that a referendum in 2020 reduced the size of Parliament by a third to 400 deputies in the Chamber from 630 previously and 200 Senators from 315 before. Also, about 36% of members will be elected in the first-past-the-post vote, where only one MP will represent each party in a region. Hence, there is a risk that voters may either switch to a candidate they don’t like or to a party they don’t support, and that risk is larger for parties that don’t have previous experience in governing, unless they create an alliance.

Excluding support for NATO and Ukraine, the new fiscal budget could be another topic of controversy, but it won’t be the first time. Being new in the role, Meloni will probably pledge to go big on fiscal spending with scope to gain public trust at a time when the energy crisis promises a tough winter ahead. But seeking channels of finance could be a complicated task. 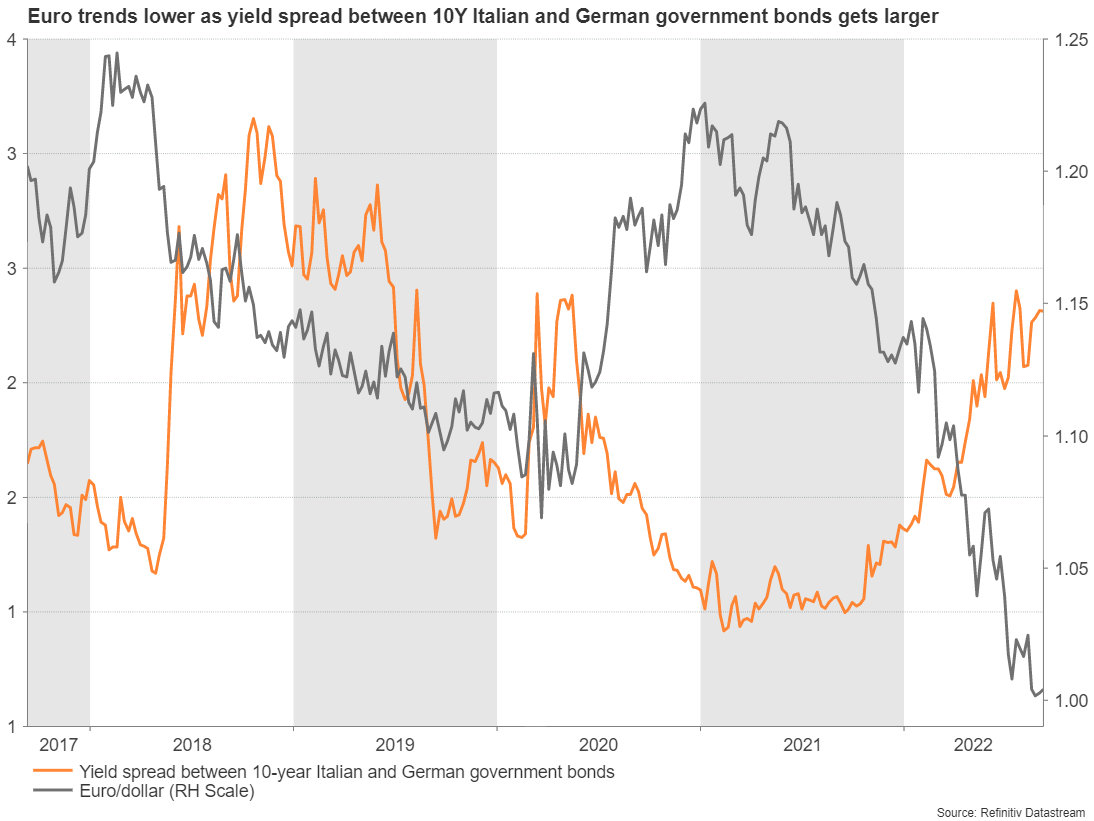 It’s clear that the EU’s recovery fund will not be used for offsetting energy bills. The ECB cannot be guaranteed as a bond buyer either following the termination of its 1.7tn euros pandemic scheme and its main 3.3tn euros asset purchasing program, unless there is a real danger of insolvency. Memories from the 2011 debt crisis, when the same coalition was in power, may also keep liquidity in Italian bond markets dry for longer, while reliance on economic growth will not be a wise thing to do given the growing recession fears in the country, whose public debt is the second highest in the EU.

Therefore, with rising interest rates widening the spread between the 10-year Italian and German bond yields, making borrowing more expensive for the indebted Italy, the new prime minister may have limited options to finance any meaningful tax cuts and welfare reforms.

The above suggests she will probably comply with the EU budget rules – at least at the beginning – and pressure the union for more finance only if her party’s popularity gets damaged. Perhaps if far right parties gain ground in other EU member states too, she might have some backing.

Internally, some political drama cannot be ruled out either if the alliance requests a change in the way the president is elected. 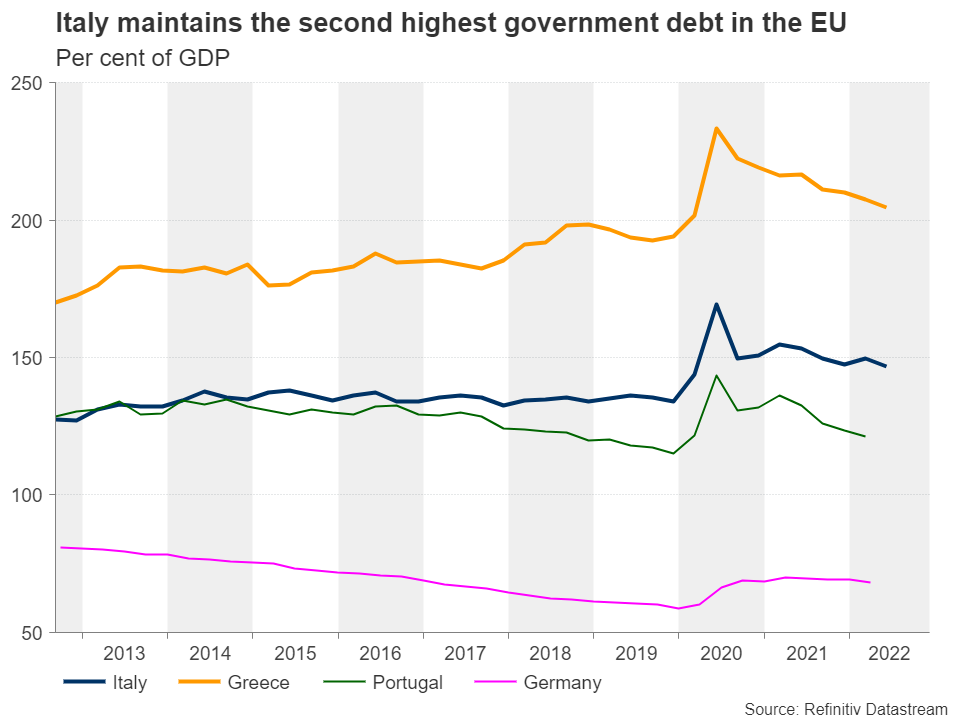 Turning to FX markets, a right-wing dominance is considered negative for the eurozone’s unity and therefore for the euro. However, the cloudy economic and geopolitical circumstances in the region are currently leaving little room for rebellions in Italy as all attention remains on how the EU member states will secure enough energy supplies for the months ahead. That is somehow explaining the euro’s neutral reaction to Meloni’s rising chances of victory, while also foreseeing tensions to be moderate and not disruptive for the currency at least as long as public finances are manageable.

From a technical perspective, euro/dollar will need to stage a durable move above the bearish channel at 1.0192 to boost buying confidence and shift attention towards the August high of 1.0367. If the pair creates a higher high above it, violating the negative trend in the market, the bullish wave could gain another leg up to 1.0600.

Should the price start a new bearish round within the channel, some consolidation could commence around 1.0012 before the crucial support line, which connects the lows from August 2018, comes under the spotlight again around 0.9885. Failure to pivot here could print a new lower low somewhere between the 0.9775 and 0.9700 levels. If selling pressures intensify, the next stop could be around the channel's lower boundary at 0.9550.