Alibaba is set to announce its second quarter financial results on Thursday, August 4, before Wall Street’s opening bell. The company’s shares have been plunging since early 2021 as the online retail behemoth was caught in the middle of a major regulatory crackdown on multiple sectors of the Chinese economy. To make matters worse, the upcoming earnings report is expected to indicate the impact of the renewed round of Covid-19 restrictions in China, while geopolitical tensions between China and the US continue to pose a significant threat.

China’s retail giant has seen its earnings estimates for Q2 getting slashed amid the government’s pursuit of zero-Covid strategy, which has slowed down manufacturing production and worsened supply chain disruptions, causing weak GDP growth in the second quarter. In turn, these developments have been constantly discouraging consumer spending as fears over the broader Chinese economy mount.

This latest development adds yet another complication to a raft of existing challenges that most major Chinese tech companies have been grappling with, including a long-lasting regulatory assault by the government, global monetary tightening and persistently high inflation, which have dented demand for non-essential goods. 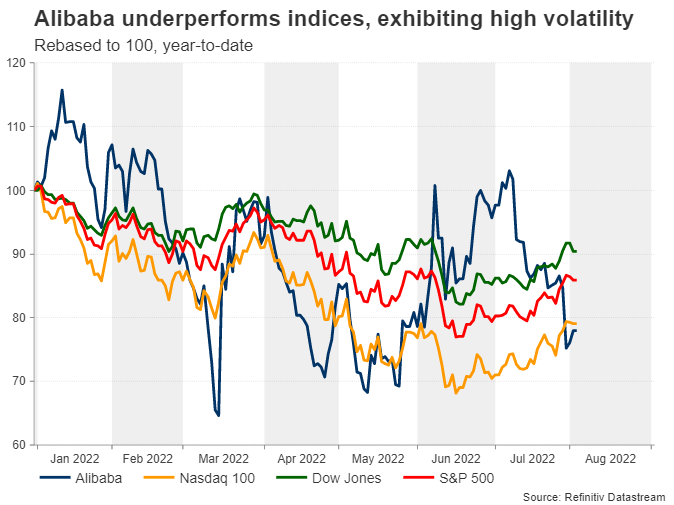 Geopolitics back on the table

The ongoing war in Ukraine has heightened geopolitical tensions’ impact on stocks, with many investors losing interest in Russian shares due to the potential harmful financial effect that Western sanctions could inflict on them. Therefore, as China continues to flex its military muscles near Taiwan, threatening the US with severe consequences if it tries to intervene, demand for Chinese stocks from foreign investors could collapse.

Last Friday, the Securities and Exchange Commission included Alibaba on a list of foreign companies whose auditing processes cannot be fully inspected by the Public Company Accounting Oversight Board. That incident puts Alibaba’s shares at risk of delisting from the New York Stock Exchange if the company’s financial statements can’t be thoroughly inspected for three straight years. Alibaba announced that it plans to upgrade to a primary listing in Hong Kong in response to the threat it could be forced to delist from US exchanges.

On the one hand, where a company is listed should not affect its valuation as fundamentals and growth prospects are predominantly what should be taken into account. However, investors are considering a US listing as a safety net for the trustworthiness of a firm’s financial statements.

Alibaba is anticipated to post negative financial performance as the raft of macro and idiosyncratic risks that the company has been experiencing during the previous months appear to have largely weighed on its profit margins. The retail behemoth is expected to post revenue of $203.2 billion for the second quarter, according to consensus estimates by Refinitiv IBES, which would represent a marginal year-on-year drop of 1.2%. Additionally, earnings per share (EPS) are estimated at $10.39, marking a 37.4% decline on an annual basis.

Although Alibaba realized huge gains after the Covid-19 pandemic outbreak, the latest lockdown appears to have an adverse impact on the firm as it is also facing tough challenges stemming from the uncertain macroeconomic outlook of the Chinese economy. These developments have caused Alibaba’s share price to decrease dramatically in 2022, making its valuation attractive for investors, who bet on the company’s growth prospects but also waited to step into the market at lower levels.

The firm is currently undervalued with a trailing 12-month price to earnings (P/E) ratio of 11.2 (as of August 3, 2022), which is lower than its sector’s average of 22.9. Moreover, its forward 12-month P/E ratio is currently at 11, with most of its major competitors reporting a higher figure. 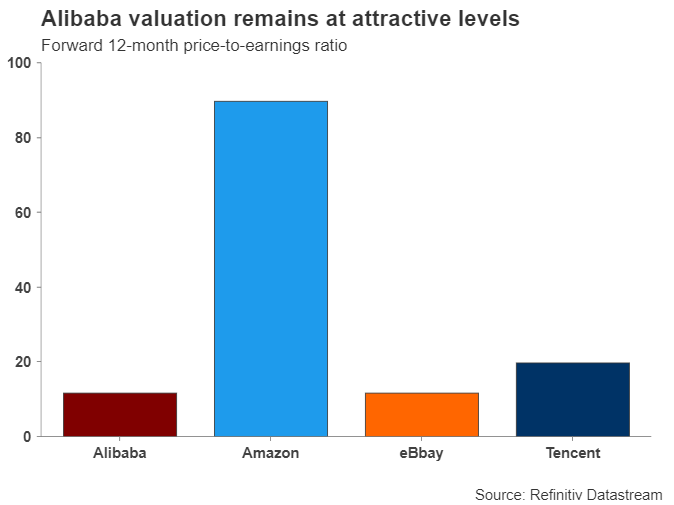 Taking a technical look at Alibaba, a negative long-term outlook can be observed as the share price has been losing ground since the beginning of 2021. However, in the last six months, its price action has been fluctuating in a sideways channel, awaiting developments that can provide a clear directional impetus.

In case of stronger-than-expected financial results, the stock price could test the $109 barrier. Should buying interest intensify further, then the next obstacle could be met at the recent peak of $126.

On the other hand, if earnings disappoint, initial support may be found near the recent low of $88, where a potential violation would turn the focus towards the 2022 bottom of $73, which is also a five-year low.