The earnings season for the big US tech companies will feature Apple’s Q2 earnings today after the closing bell. Following Facebook’s better-than-expected release, which brightened the mood on Wall Street yesterday, it would be interesting to see if Apple can revive the stock rally even though forecasts point to a significant slowdown. Nevertheless, the iPhone maker has escaped the latest global tech sell-off with few injuries so far, and traders may remain confident in the stock, with the consensus recommendation from Refinitiv analysts being “buy”.Apple stock outperforms tech industry

Apple has been through severe headwinds during the past two years, from pandemic-led supply hits and semiconductor supply shortages to antitrust scrutiny for its App store policy, and more recently to rising global interest rates. Despite that, the company’s brand name and its well-structured investment fund, which offset the $2.6bln interest expense last year, put the giant American multinational company at a better position than its FAANG peers in stock markets. Particularly, Apple's stock has lost only 5.8% year-to-date compared to the huge 61.5% freefall in the Netflix stock and the 40.4% sell-off in Meta platforms. It is also outperforming the S&P 500 community, which is down by 6.4%.

Undoubtedly, its heavy ongoing buyback program, which is expected to extend by $90bln on Thursday, has also been adding a strong footing under its stock price. 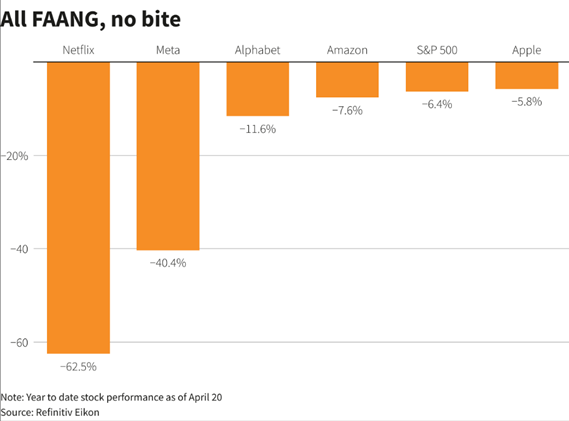 Valuation metrics are favoring Apple's stock as well. Particularly the giant American tech multinational trades at a forward P/E ratio of 27.4, which is still richer than the industry’s average of 25.3 but compared to Amazon’s ratio of 47.3x and Microsoft’s 30.3, it is relatively cheaper.

During the previous earnings call, the company did not provide guidance for its Q2 performance because of the pandemic uncertainty, but it nourished hopes it will achieve solid annual expansion and receive record quarterly revenues. Thursday’s results, however, could paint a gloomier picture as analysts estimate a faster quarterly revenue decline of 24.2% to $93.8bln from 11% in Q1, mainly driven by a slowdown in the flagship iPhone sales. On a yearly basis, revenues could remain elevated above the 2021Q2 reading of $89.5bln, though the rate of expansion may appear the softest since the end of 2020. Earnings per share (EPS) are forecast to follow a similar pattern, marking a quarterly pullback of 32% to $1.43 and a negligible annual pickup of 2.0%. 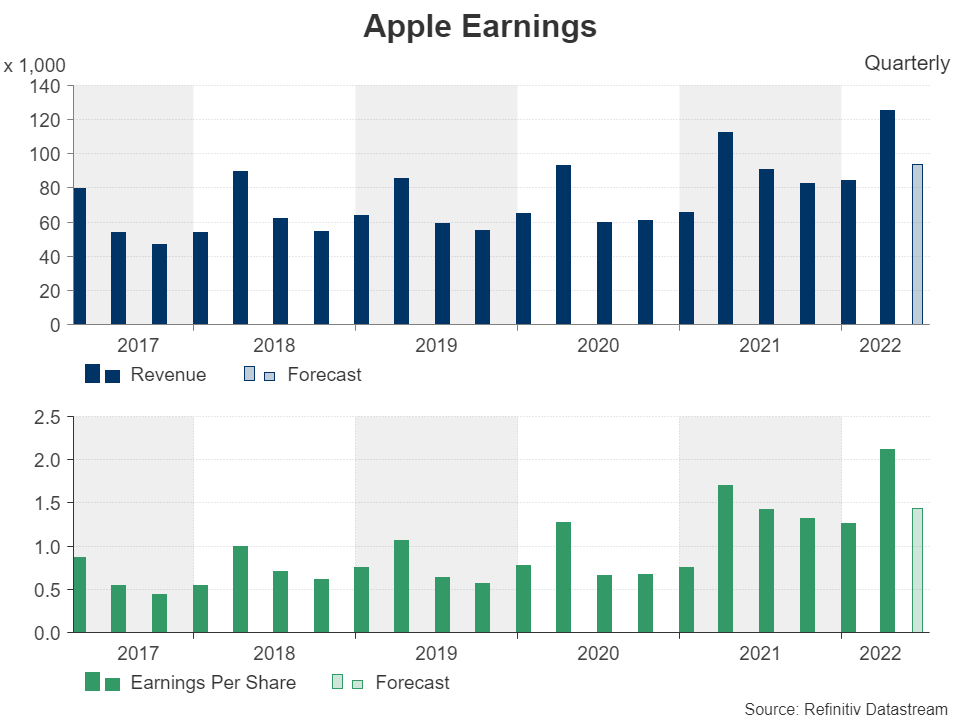 Given that the company has been topping investors’ estimates almost every single time over the past four years, another upbeat report is likely. December’s quarter was quite innovative, introducing a flood of new products including iPhone 13, Apple watch series 7 and updated Macs, which consequently led to record results despite a setback in iPad demand. Investors will also watch how the services segment fared after predictions for a double-digit growth, while ad revenues may also come under the spotlight after Meta blamed the company’s privacy policy changes regarding its IOS users.

China, base effects could be a drawback

The start of 2022 has launched another row of exciting gadgets, such as the third-generation budget iPhone SE, the extraordinarily powerful MI1 ultra chip, which is a new feat of engineering for the company, a new Mac studio and the iPad air. The problem is that China's recent lockdowns caused disruptions in Apple's supply chain, which account for almost half of the total assembly. Therefore, investors will look for any dim signs in iPhone 13 and Mac sales.

Given the uncertainty around the future of the global economy and the narrowing year-on-year comparisons, guidance for Q3 could be crucial as well, even though the company has been refraining from providing any specific estimates lately.

Should earnings arrive brighter than analysts anticipate, especially on the revenue and profit front, Apple's stock could overcome the resistance around the 200-day simple moving average (SMA) at $159.18 and speed up to $165.00. Moving higher, some consolidation may occur around $170.50 before the way clears towards the tentative descending trendline at 178.

Alternatively, a miss in forecasts could pressure the price below the current $156.00 support area, bringing the previous low of $150 under examination. Not far below, the $147.00 mark could also come to the rescue in the event of a sharper downfall, though if it proves fragile, the door could open for October’s low of $138.37.