Facebook’s parent company, Meta Platforms Inc, is set to unveil its latest earnings on Wednesday, April 27, after Wall Street’s closing bell. The social media behemoth is going to face an extremely tough year-on-year comparison as the choice to prohibit Russian users from using its platforms had an adverse effect on both subscriber and advertisement growth figures. Apart from that, the firm experienced an alarming number of headwinds in the first quarter, causing its share price to nosedive, currently losing 45% on the year. Despite the barrage of negative headlines and developments, Meta’s consensus recommendation from Refinitiv analysts is ‘buy’, indicating bright growth prospects for the company.Headwinds mount amid a constantly deteriorating macro environment

Meta has been one of the worst-performing stocks this year amid an unfavourable macroeconomic outlook, rising competition, and a wide range of idiosyncratic risks. Firstly, since the beginning of 2022, investors have been bracing for a series of interest rate hikes by the Fed, which are expected to directly reduce the value of all companies’ future cash flows and discourage borrowing to fund new investments. That said, tech firms whose performance heavily depends on their growth prospects, will take the hardest hit.

Moreover, Meta faces increased competition from short-form video platforms like Snapchat and TikTok, in which users currently prefer to spend more of their leisure time, curtailing the time spent on Meta social media platforms. In response, Meta has been developing a similar type of short-form videos called Reels, but they have not yet managed to monetize at higher rates than Feed and Stories. This harsh competition led to the firm’s user number declining for the first time in history in the previous quarter, while the recent ban on Russian accounts has reduced the probability of a complete recovery in the upcoming report.

To make matters worse, the changes in privacy settings introduced by Apple have made it much harder for Meta to collect the necessary data to track people’s online behaviour so it can provide them with advertisements relative to their interests. This development has largely weighed on Meta’s revenue as marketers would prefer to allocate their capital to platforms that can advertise products to a more targeted audience. Unfortunately, these changes came at a time when demand from advertisers has already started to wane as firms reduce spending due to increasing fears over a global recession.

Another tough quarter is expected

The upcoming earnings report is expected to reflect the magnitude of the aforementioned headwinds’ impact on Meta’s financials. Specifically, forecasts by Refinitiv analysts suggest that earnings per share (EPS) are expected to fall from $3.62 in the last quarter to $2.52, which would represent an annual decline of 23.80%.

Revenue is projected at $28.26 billion, an increase of almost 8% over the same period last year. Although this figure could initially sound good, it would be the slowest pace of increase in the last three years and mark a decline from the last quarter.

Furthermore, guidance is going to be a key aspect of the upcoming earnings report as last quarter’s guidance proved to be more harmful to the share price than the disappointing financial figures themselves.

Metaverse’s road to profitability could be long

Meta has been dedicating most of its disposable income to the development and expansion of its interactive digital environment called Metaverse. In 2021, the metaverse activities posted an operating loss of over $10 billion dollars, while they are anticipated to report an additional loss of $3.5 billion in the first quarter of 2022.

Most analysts continue to be hesitant over Metaverse’s success because, despite the new monetization schemes and the constant improvements, its adoption remains very low. Therefore, pursuing a costly dream in a period where both its core social media and advertising businesses are struggling, could prove to be a deadly mistake for Meta.

Valuation looks more attractive than ever

On the bright side, valuation is currently more attractive than ever. The 12-month forward price-to-earnings ratio, which denotes the dollar amount someone would need to invest to receive back one dollar in annual earnings, currently stands at 14.2x. This ratio is not only way lower than heavy-tech Nasdaq’s 27.0x but also against S&P 500’s 19.2x. 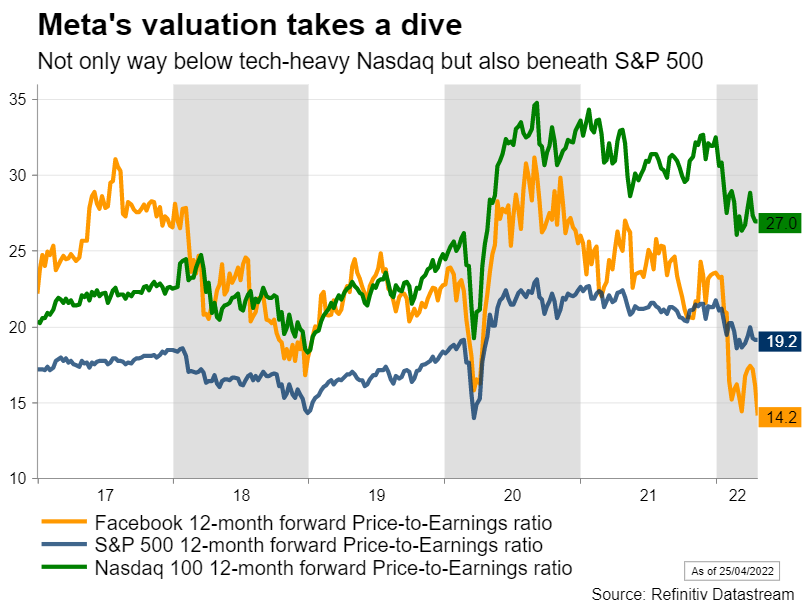 Overall, even if Meta struggles in the near future, it’s difficult to argue that the firm does not have substantial long-term growth prospects. Considering that almost half the world’s population is using the company’s platforms, which include Instagram, WhatsApp and Messenger, even small changes in its business model can lead to tremendous increases in income and profits.

On the other hand, there are also several looming risks. The upcoming monetary tightening, harsh competition from rivals and slowdown in ad revenue could pose considerable threats to the firm’s outlook. Moreover, Meta has also based a huge part of its future prospects on the success of Metaverse, which is currently not living up to expectations.

After a stellar 2021 in which Meta’s stock price marched to a new all-time high, 2022 brought a persistent weakness in the price action. Therefore, investors will be closely eyeing the firm’s Q1 earnings release for signs of fundamental strength even if macro and broader headwinds are multiplying.

In the positive scenario, bullish forces could propel the price towards $244. Successfully breaching this region, the price might then test the $297 level, which is the 61.8% Fibonacci retracement of the $244-$384 up leg.

On the flipside, should financial figures disappoint, the bears might aim for the 2022 low of $181 before the 161.8% Fibonacci extension of $158 appears on the radar.