While traders evaluate the bitter aftermath of the FTX’s fall, questions are rising about whether there is enough bullish incentive left to lift cryptos up again. Total healing might take some time as failures push for new limitations in the industry, though hopes for reduced risks in the future may keep some buyers interested.  Damaged sentiment

The domino effects from FTX’s and Alameda Research’s collapse continued to undermine trust in digital-asset markets for another week, with Bitcoin and Ethereum tip toeing sideways marginally above November’s two-year lows.

Crypto lender BlockFi has already filed for bankruptcy, while investigations broadened to other companies as well, including Genesis’s lending arm Genesis Global Capital and the US-based Silvergate Bank, which was involved in fund transactions between FTX and Alameda.

The truth is that liquidity crunches in crypto markets are not something new. Traders experienced a similar incident in the second quarter when a sudden freefall in TerraUSD and its sister coin Luna crashed digital markets. Then, the high-profile crypto hedge fund Three Arrows Capital suddenly blew up during the same period after failing to meet margin calls, sending another shockwave.

Falling trading volumes in Bitcoin, and similar tendencies in other leading cryptos, is a reflection of discouraged investors, who look for opportunities elsewhere as the environment in digital markets remains shaky.

Probably more failures will pop up in the future since the regulatory framework is far from optimized in digital markets, but despite the tremendous slump in prices and valuations - or perhaps because of it - some traders tend to jump back in. Goldman Sachs was among investors that showed interest in buying or investing in more crypto companies this week.

Perhaps it’s a great time to buy when there is blood in the streets. The latest turmoil could only raise alarms for more protection and regulation, making failures less frequent in the future. Binance, Kraken and many more have already hired auditors to verify their reserves and prove their solvency. From the government level, consultations are already intensifying in several countries, making 2023 a decisive year for introducing new legislations and better global cooperation.

Encouragingly, Bitcoin’s resilience against renewed speculation that the Fed may drive interest rates higher than analysts expect signaled that buying interest is still present, or at least some holders are waiting to pick up more coins just around the 17,000 support region (20-day simple moving average). Interestingly, Bitcoin’s solid positive correlation with major US and EU stock indices, such as Nasdaq 100 and DAX 30, has relaxed over the past month. Its parallel movement with gold has been disturbed too. 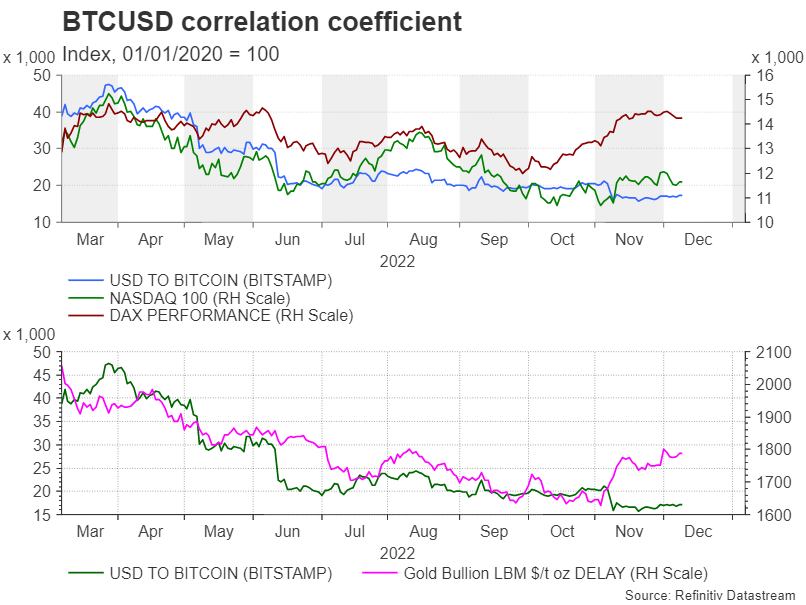 Unlike its battered peers, Litecoin found enough buying interest to sail through the bearish market winds and establish a new seven-month high at $84.92 earlier this week. The cheap altcoin snapped its FTX-linked freefall immediately at the end of November, closing the month solidly up by 24% and 50% higher than Bitcoin.

While there is no specific fundamental tailwind behind the rise, traders are probably engaging in larger exposures eight months ahead of July’s halving event, which happens every four years. The pace of supply increases will be cut from 12.5 LTC to 6.25 LTC, making upswings in the price more likely on the back of limited supply dynamics. Similar bullish tendencies were observed during previous splits in 2015 and 2019 as traders rushed to buy at lower prices. Note that Bitcoin’s halving to 3.12 BTC is in March 2024.

Nevertheless, whether the bull run could develop into something more concrete is questionable as there is barely any additional driver besides the fact that it's a lighter version of Bitcoin, which runs a similar technology to Bitcoin but with faster and cheaper transactions.

Moreover, traders’ confidence in the altcoin has diminished after its founder sold all his holdings near all-time highs in 2017 and the loss in market capitalization eased profitability. Competition against the most interesting blockchains in NFTs and DeFi products could be tough as well.

From a technical perspective, the bullish crosses between the simple moving averages (SMAs), increase the odds for another upside breakout. Yet only a sustainable extension above the $91.40-$100.00 region would raise fresh buying orders.