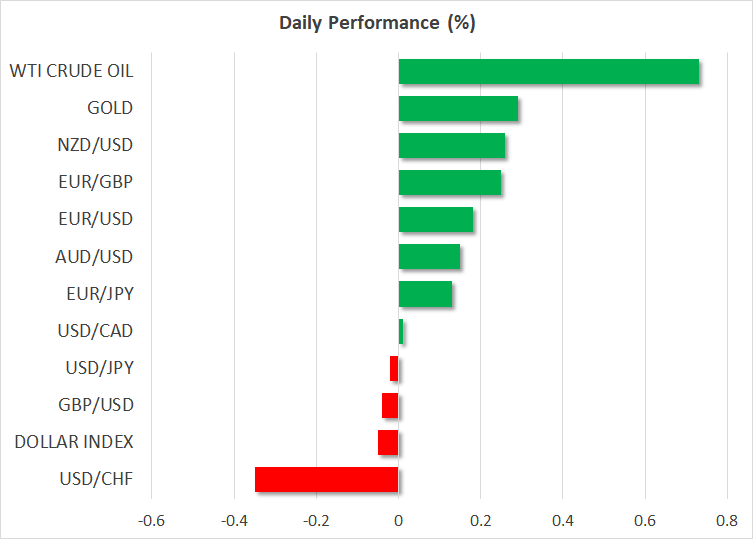 OPEC and its non-OPEC partners decided to cut oil production by two million barrels per day on Wednesday in a bid to stem the decline in prices, which have fallen by more than 30% from their March peak. The reduction is double the one million bpd that was initially suggested but oil futures already rallied significantly once the reports of two million began to circulate, thus, the announcement was met with a ‘buy the rumour sell the news’ response.

However, there are also doubts as to how much of an impact the new quotas will have on actual production as many OPEC members have been underproducing for months amid capacity constraints. Some estimates put the actual cut at one million bpd and that probably explains why oil prices are struggling to extend their gains, not to mention the fact that there is technical resistance at the 50-day moving average.

Still, with inflation so high everywhere, the decision couldn’t have come at a worse time for the global economy. The reasoning by OPEC+ that demand is weakening due to a slowdown in the major economies is not entirely plausible as many countries, particularly European ones, are switching from gas to oil and so the demand outlook isn’t quite so clear. Nobody knows how the coming winter will pan out for Europe, but OPEC has done the opposite of bringing some certainty to the energy market.

After a 15% bounce-back from the September lows, WTI futures were trading flat today.

Stocks, meanwhile, were surprisingly buoyant on Thursday, with investors unfazed not only by the prospect of higher energy prices but also from the latest set of economic gauges out of the United States that dampened bets of a policy shift by the Fed.

The S&P 500 reversed earlier sharp losses to end Wednesday’s session just 0.2% lower. Energy stocks lifted the index, although Tesla was a drag as investors are worried that Elon Musk would have to sell more of his shares in the company to fund his acquisition of Twitter.

A rebound in Treasury yields also weighed on the market, though US futures were steady on Thursday and European shares were mostly positive. Solid readings in the ISM non-manufacturing PMI as well as the ADP employment report yesterday dealt a blow to expectations that the Fed might begin slowing down the pace of its rate increases. Comments from regional Fed presidents Mary Daly and Raphael Bostic further reinforced the view that a dovish pivot is a long way off.

Nevertheless, it seems that investors have not totally given up on hopes that the Fed will be forced to change course sooner rather than later and some traders may be sitting on the sidelines until they get a fuller picture on the US economy from Friday’s nonfarm payrolls report.

The US dollar was slightly up against a basket of currencies on Thursday, having come off its highs yesterday.

Recession fears continue to dog the euro and pound, with their recovery against the greenback likely having gone as far as it can for now. German economic data keeps going from bad to worse and the EU’s latest package of sanctions against Russia, which includes a price cap on Russian oil, raises the odds of Moscow completely turning off the gas taps to Europe.

In the UK, Prime Minister Liz Truss said little to reassure investors in her party conference speech on Wednesday that the government has a grip on the country’s finances or that she is doing enough to unite an increasingly divided Tory party.