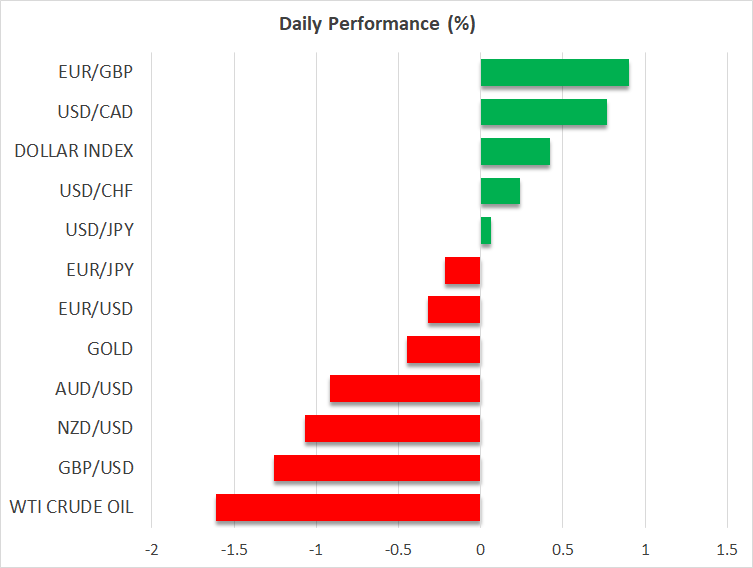 Fed Chair Jerome Powell stole the limelight at the IMF’s spring meetings yesterday, as he reinforced expectations that the Federal Reserve will hike rates by 50 basis points when it meets in early May. Powell admitted that the Fed had expected inflation would peak “around now” but is longer assuming that it will, nor would it count on supply-side issues to resolve themselves.

This marks a turning point for the Fed as Powell is essentially signalling that he and his colleagues have run out of patience and will tighten policy until inflation is back to their 2% target.

With Powell now also throwing his weight behind “one or more 50-bps hikes”, Fed Fund futures went into overdrive on Thursday as investors priced in 10 25-bps rate increases by December.

Treasury yields rallied and the US dollar recouped almost all of this week’s losses. The yield on two- and five-year Treasury notes jumped to more than three-year highs, while the 10-year yield is back around 2.95%, having dipped as low as 2.8190% on Wednesday.

This has put the spring back in the dollar’s step, with its index against a basket of currencies rebounding 1.1% from Thursday’s lows to head back up towards this week’s two-year peak of 101.04.

Pound slumps, euro has some support

The stronger dollar wreaked havoc in currency markets with the pound in particular taking a hard punch. Bank of England Governor Andrew Bailey, who spoke at the Peterson Institute yesterday on the sidelines of the IMF meetings in Washington, repeated his cautious stance on monetary tightening.

Bailey warned “we are now walking a very tight line between tackling inflation and the output effects of the real income shock”, suggesting that the Bank of England is more worried about a recession than the Fed is. With Bailey even going as far as saying that the inflation shock in the UK has more in comment with the Eurozone than the US, investors no longer think the BoE will be able to keep up with the Fed in terms of rate hikes.

The pound has plummeted to below the $1.29 level in the aftermath of yesterday’s remarks, hitting a 1½-year low. A much bigger-than-expected drop in UK retail sales in March is adding to sterling’s woes today.

The euro is also on the slide, sharply reversing Thursday’s gains when it briefly reclaimed the $1.09 handle to slip back towards the $1.08 level. ECB head Christine Lagarde did not comment on monetary policy when she spoke alongside Powell yesterday but the hawkish remarks from several Governing Council members this week does appear to have potentially put a floor under the euro for now.

Slightly better-than-expected flash PMIs for April might also be cushioning the single currency from steeper declines.

In contrast, the Canadian dollar couldn’t find much support from the hawkish signals by Bank of Canada Governor Tiff Macklem, who yesterday did not rule out raising interest rates by more than 50 bps in one go.

The loonie has plunged sharply in the last 24 hours, falling to a more than one-week low of C$1.2673 per dollar. The other commodity-linked currencies have come under pressure too.

The New Zealand dollar is down almost 1%, while the Australian dollar is close to breaching the $0.73 level.

The yen was the only exception today, managing to hold steady against its US counterpart. This could simply be a case of the selloff taking a breather, but there’s also likely to be a bit of caution on the possibility that Japanese authorities might intervene to prop up the yen following reports that Finance Minister Shunichi Suzuki may have discussed joint action with the US.

On Wall Street, all the main indices closed lower on Thursday, reversing earlier gains. The S&P 500 shed 1.5%, while the Nasdaq Composite slid 2.1%. A 3.2% jump in the stock price for Tesla was unable to lift the broader market as Powell’s hawkish pivot spooked traders and higher Treasury yields weighed on growth stocks.

Nevertheless, with about 80% of companies in the US that have reported their earnings beating their estimates, further losses might be contained.

US stock futures were last quoted about 0.1% lower and European indices were all in the red too. 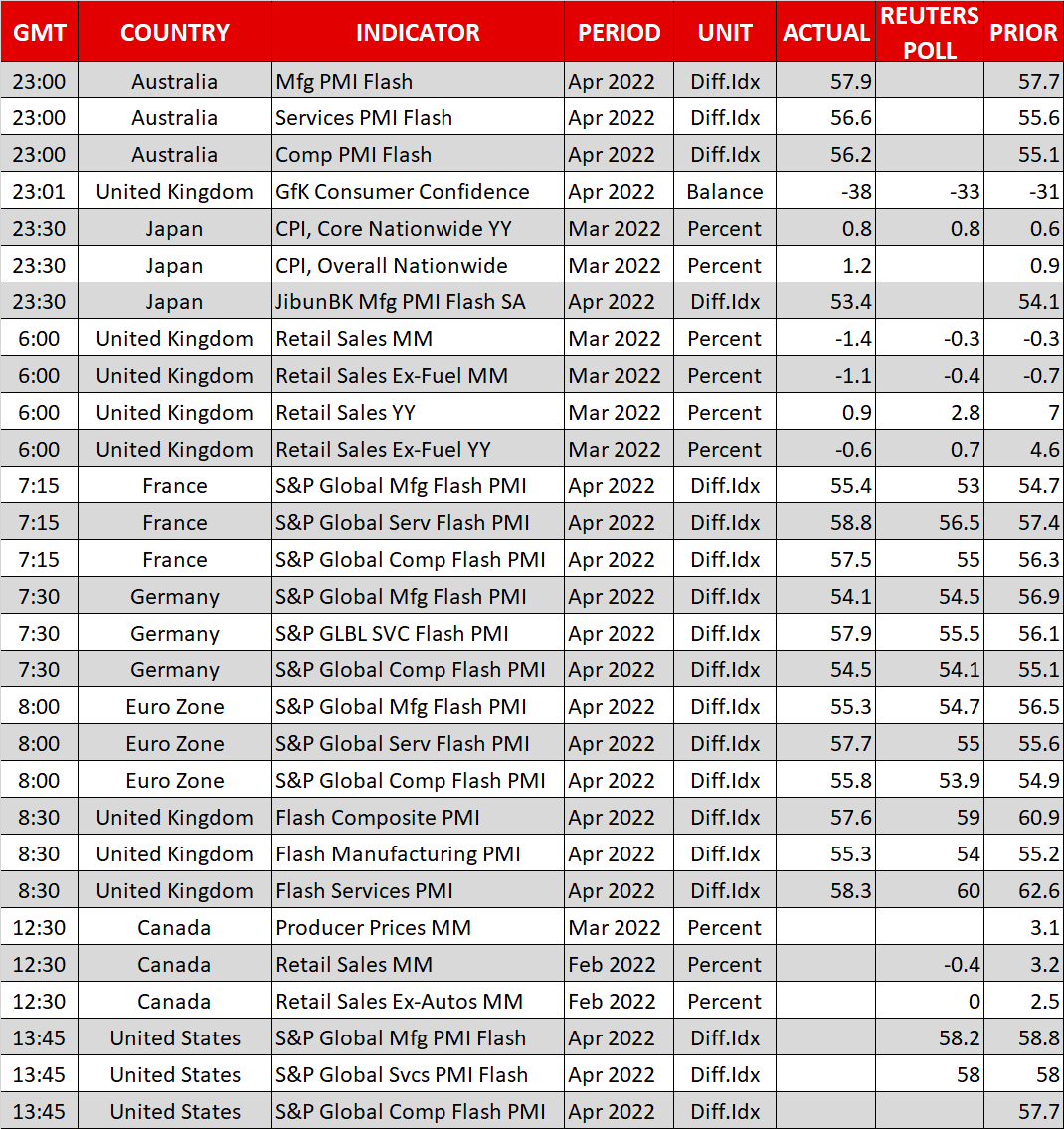