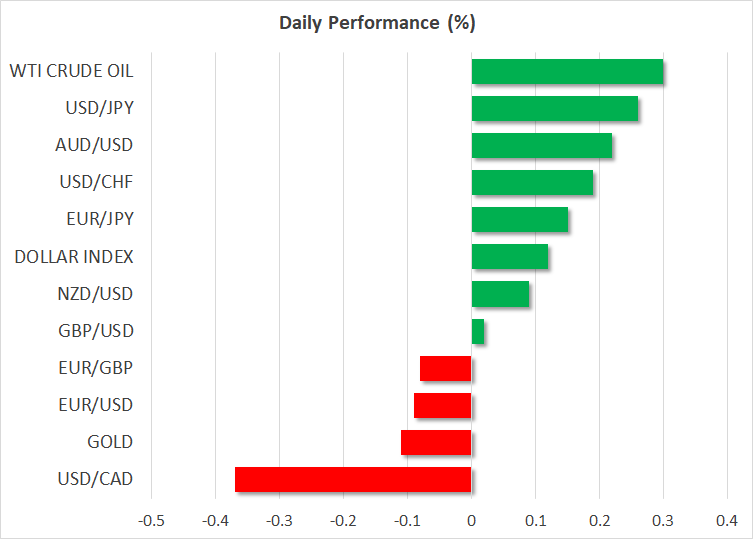 Will Powell scare markets or soothe the panic?

All eyes are on the Fed today as investors search for some much-needed policy guidance amid spiralling inflation, growing doubts about the economic outlook and geopolitical tensions in Eastern Europe. The FOMC decision itself, due at 19:00 GMT, is not expected to spark any fireworks, though there’s a small risk the Fed might decide to end its asset purchases even earlier. Chair Powell’s press conference 30 minutes later will be the main highlight as markets will try to get a sense of how fast policymakers want to move in terms of normalizing policy.

Powell will likely give his blessing to the fully priced rate hike in March but what exactly comes after that is open to debate. There is no dot plot chart at the January meeting so Powell’s tone will be very important in dictating sentiment. Should he signal that more than one rate hike per quarter might be needed to fight inflation, that could send stocks spinning again.

Another hot issue for the markets right now is the timing and pace of the Fed’s balance sheet reduction plan. Powell is unlikely to reveal much at this point so it will all come down to how worried he will sound about inflation and whether he will attempt at all to ease investor fears that the Fed may end up tightening policy too aggressively.

The Bank of Canada will announce its decision a few hours before the Fed and may opt to get a head start on rate increases even though its last guidance didn’t foresee such a move before April the earliest. With a strong labour market and inflation at a 30-year high in Canada, a surprise rate rise is more than possible from a central bank that has a history of shocking markets. Although it wouldn’t exactly be considered much of a surprise when rate hike odds are as high as 80%.

Hence, it’s questionable whether the Canadian dollar will be able to make another push for the recent high of C$1.2450 per dollar level in the near term.

The greenback’s latest resurgence has quashed the mild rebound that the riskier currencies were enjoying in December and early parts of January when the loonie, along with the pound saw the strongest recovery.

The US dollar index is currently trading near two-week highs, climbing back above the 96.0 level and awaiting fresh direction from the Fed. The yen, however, gave up some of its recent gains as safe haven flows eased somewhat amid no fresh escalation in the standoff between Washington and Moscow over Ukraine.

The pound was steady around $1.35, showing few nerves even as things keep getting worse for UK Prime Minister Boris Johnson, who is being investigated for holding a birthday party during lockdown. The next 24 hours could be critical for Johnson when the report into the ‘partygate’ debacle is expected to be published.

In equity markets, most stocks were in the green, though some Asian markets remained under pressure. European shares opened strongly higher, extending their gains into a second day, despite another wild session on Wall Street on Tuesday.

US stocks fell at the open, started rebounding in late trading, before taking a tumble right before the close. The S&P 500 ended the day 1.2% lower, while the Nasdaq Composite slipped 2.3%. The volatility soon settled down afterwards, however, after Microsoft cheered markets by predicting its cloud unit will enjoy faster growth in the current quarter, following slightly disappointing growth in the reported period.

Microsoft shares were up more than 3% in pre-market trade and US e-mini futures were sharply higher on Wednesday, led by Nasdaq futures, which were last quoted up 2%.

However, there’s plenty of tests still to come for the markets, as aside from the Fed meeting, Tesla will announce its earnings after the closing bell.