Tesla’s CEO Elon Musk caught everyone’s attention last week after becoming Twitter’s biggest shareholder and more shockingly after submitting his takeover bid for the social media platform. He will probably stay on the wires for a bit longer, as his electric car company Tesla is scheduled to release its first quarterly earnings for 2022 today after the market closes. The report could be another big win for Musk, however, Tesla’s stock may only extend its soft bullish rotation if the company’s forward guidance is ambitious enough.  Twitter challenge rolls in

The world’s most valuable carmaker saw its stock sliding back below $1,000 on Wall Street last Thursday and has been struggling to recover since then following Musk’s proposal to buy Twitter for $43 billion or $54.20 per share. That accounts for a 20% premium to where Twitter’s stock is currently trading and 54% from January when Musk started to buy shares in the company.

Tesla is still substantially outperforming the S&P 500 and Nasdaq 100 indices year-to-date, though the idea of acquiring a social media platform made investors nervous enough to reduce some exposure to the stock. The reasoning is that Musk is already running two huge businesses Tesla and SpaceX - and he also owns several promising companies such as the brain-chip startup Neuralink and the Boring company, which is focused on designing intra-city transit systems. Hence, another important addition, such as Twitter, would probably require more financing from his primary source of wealth Tesla. Although nothing has been agreed yet, with Twitter moving to the defence to block any easy acquisition, free-speech absolutist Musk had previously expressed serious thoughts of building a new social media platform. He even proposed to take Twitter private, de-listing it from the stock exchange, especially as his Tesla and crypto tweets have been causing legal wrangling with the US security regulators. 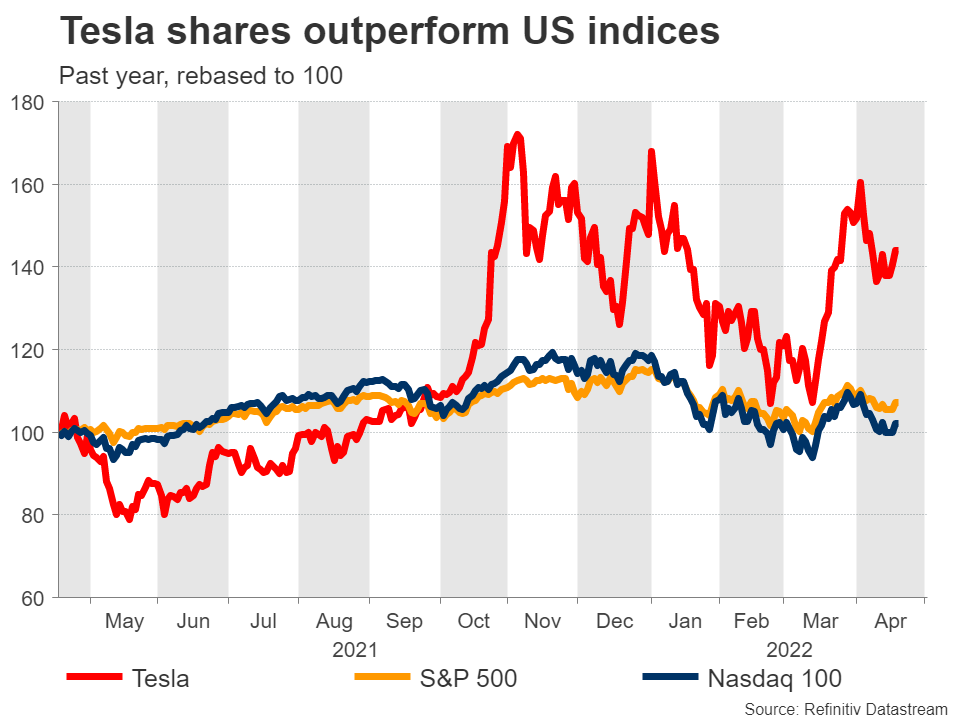 Self-ambitious or not, Tesla’s boss will not easily let the Twitter chance fly away. However, how he will raise new debt for the Twitter deal is a major concern. Tesla’s policy limits borrowing to 25% of the pledged shares’ value and Musk has already linked more than half of his 21% stake as collateral for loans. Well, several private lenders have already expressed their interest in backing the deal and Morgan Stanley is among the US banks which is willing to fund the deal. Hence, raising cash will not be troubling for Musk, though Tesla’s potential exposure to Twitter, which has been reporting negative returns over the past year and carries junk credit ratings, could be a hot topic of discussion when Tesla delivers its press release this week. 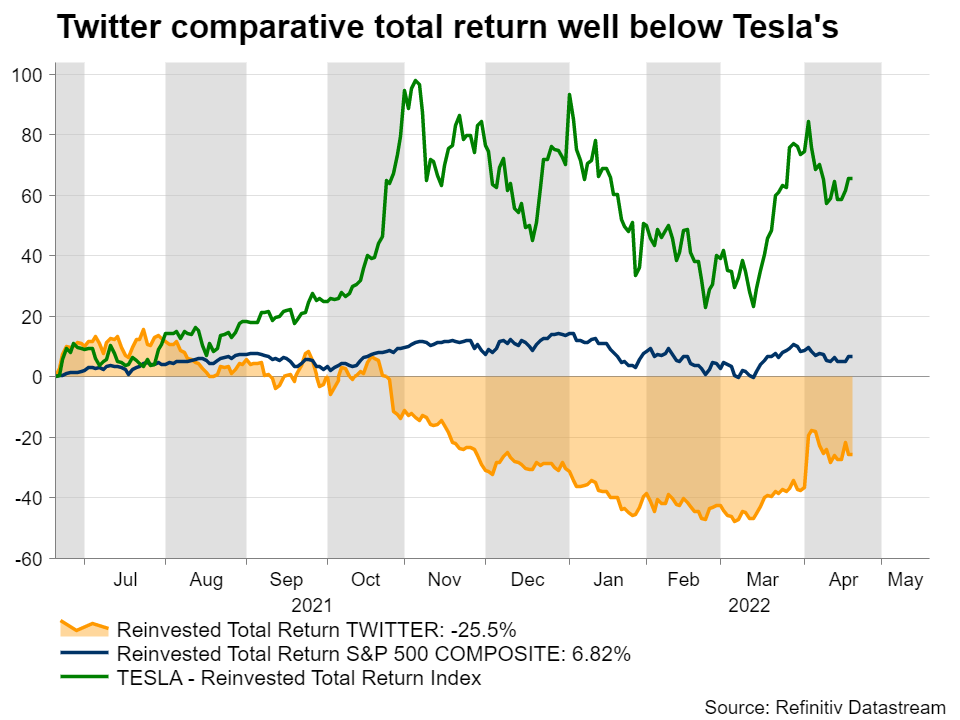 Earnings to slow down but remain elevated

Turning to its quarterly financial results, the popular electric carmaker has been performing amazingly during the past two years, beating Refinitiv estimates every single quarter during 2021. Hence, another successful start to the new year may not surprise investors. Perhaps quarterly growth may not be as rapid as during the previous earnings seasons, with earnings per share (EPS) expected to pull slightly down to $2.26 from $2.54 previously. Revenues could also post a negligible quarterly pickup of 0.43% to $17.7bln. However, on a yearly basis, EPS and revenues are projected to hold up significantly, rising by 143% and 71.3% respectively. 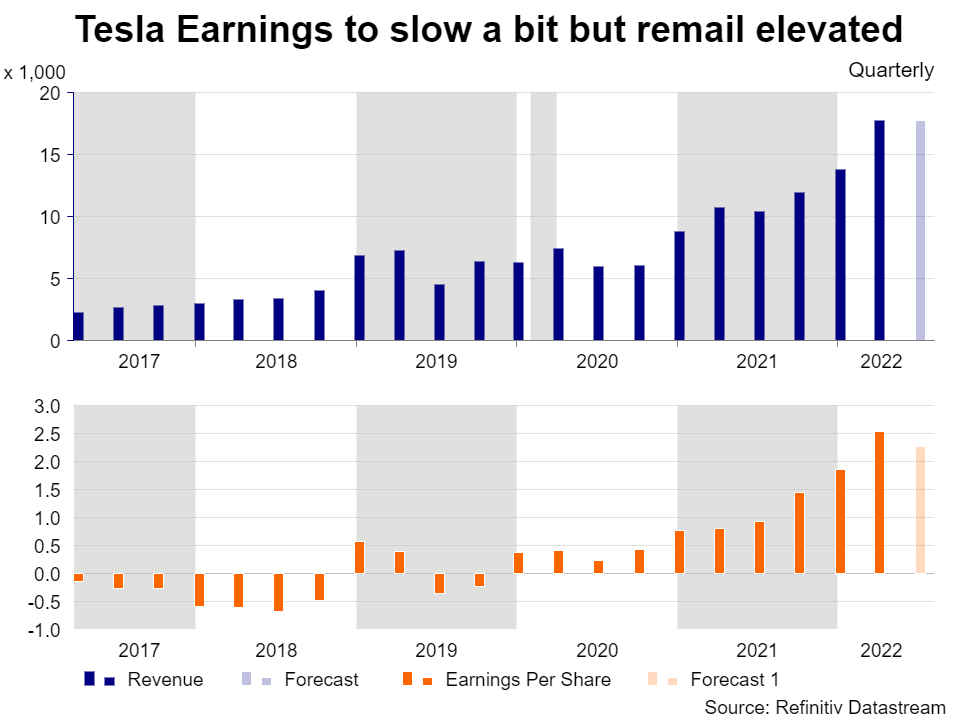 As always, though, the focus will be mainly on the production outlook. The company, having efficiently managed the shortage of semiconductors and other supply chain troubles during the pandemic, has already reported another record increase of 310,048 new vehicles in Q1 2022 compared to last quarter’s addition of 308, 650. Still, investors would like to learn how the return of lockdowns in Shanghai will affect Tesla’s new Gigafactory 3, which hosts the final assembly of best-selling model 3 and model Y. That said, two more production lines have been established in Germany and Texas. Therefore, despite the supply jitters, the company could still achieve its long-standing pledge of 50% growth in yearly car deliveries.

Another interesting question would be how Tesla is balancing rising production costs and whether its dominance in the EV industry is permitting an easier pass through to consumers. Higher gross profit margins could provide some answers.

In other news, Tesla is uncommonly seeking a second stock split in two years. It’s uncertain how and when that will take place, though the proposal still requires shareholder permission, and the next annual meeting is scheduled for June. Of note, Amazon and Google’s parent Alphabet will also proceed with stock splits in the same month. Stock splits usually have no impact on stock prices, but can be considered a sign of confidence within the company.

Looking at the share price performance, Tesla’s stock has been on the back foot so far in April, while preserving a neutral trajectory year-to-date. Record vehicle deliveries did not create any fresh buying interest in the market. Hence, upbeat financial results could also do little to drive the price confidently above the $1,023 bar and towards the resistance trendline at $1,145, unless the company plays down supply jitters and forecasts a rosy outlook for future performance.

Alternatively, a miss in earnings expectations accompanied by cautious economic prospects and Twitter threats could initially squeeze the price towards the nearby $973 support region. Breaking lower, the stock may next pause around the 200-day simple moving average (SMA) at $900 before slumping to $800.