A turbulent year is fast drawing to a close and the most crucial week for central banks is upon us. The Federal Reserve will be headlining the last rate-setting decisions of 2022 that will also cover those of the European Central Bank, Bank of England and Swiss National Bank. But it’s not just central bank meetings cramming up the schedule. There will be a flurry of economic data too, led by the latest US CPI report and the flash PMI releases for December. As such, the US dollar, euro and pound will be fighting for the limelight. The elusive wait for the Fed pivot

The Federal Open Market Committee (FOMC) will conclude its last meeting of the year on Wednesday and once again, markets seem to have fallen into the usual trap of expecting some kind of a dovish pivot in the run up to the event. To be fair, there is slightly more realism among equity traders this time round and it is FX and bond markets that appear at most odds with the Fed’s messaging. 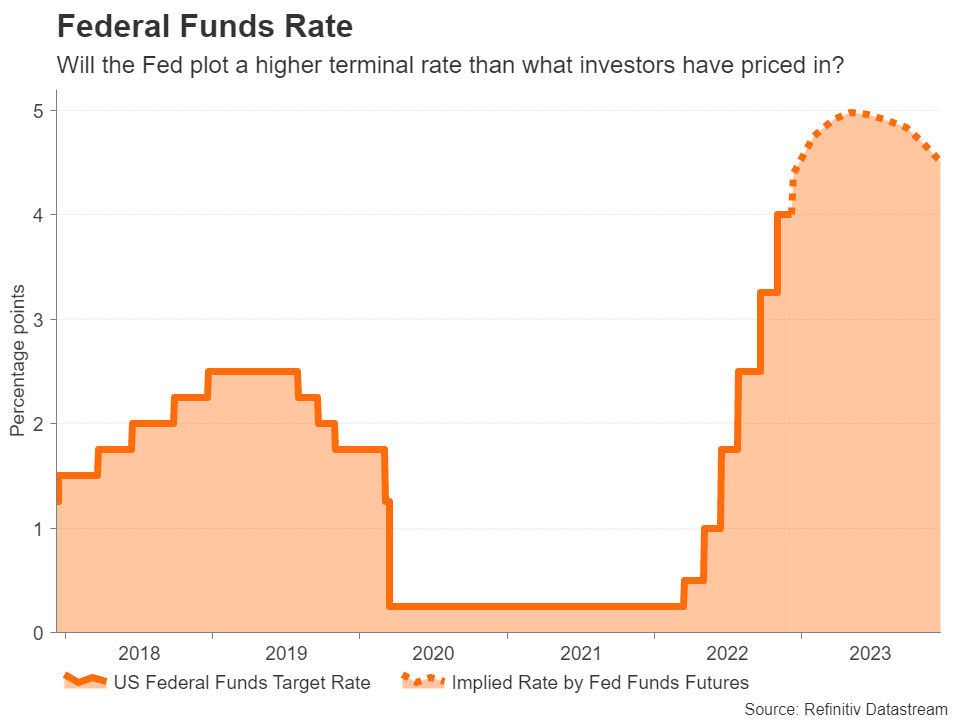 If there was going to be a pivot, that happened on November 30 when Chair Powell gave his blessing to a slower pace of rate increases, flagging a 50-basis-point hike for December. For now, that’s as dovish as the Fed will get as both inflation and the labour market remain too hot for policymakers’ comfort. With many officials clearly signalling that the December dot plot will pencil in a terminal rate of at least 5%, investors are heading towards another reality check as futures markets see the Fed funds rate peaking just below that level.

While there is no denying that the US economy is edging closer and closer to a recession and there is more certainty that price pressures are subsiding, the job is far from done from a monetary policy viewpoint. Tuesday sees the release of the November CPI report, which is expected to reveal a slight moderation in the month-on-month rate. 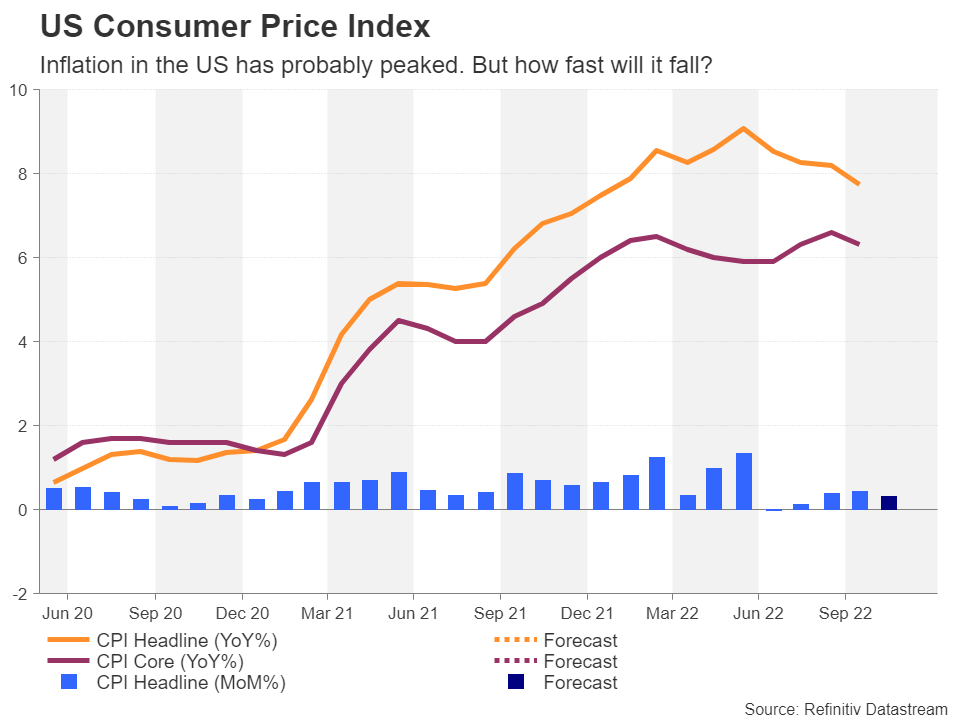 Should Powell see the need to emphasise in his press briefing that restrictive policy is here to stay and suggests that rates may have to rise substantially above 5% to contain inflation, bond markets could be hit with the most volatility since the UK mini-budget crisis in September.

Long-dated Treasury yields have been sliding for the past month, which although this is a reflection that markets believe the Fed’s resolve to tame inflation, the Fed probably thinks this is a premature sense of confidence on the part of investors. Any attempt by Powell to ‘re-direct’ the markets could trigger a massive jump in Treasury yields, spurring the dollar higher.

However, not long after the Fed decision, markets will be put to the test again as November retail sales data are out on Thursday along with industrial production numbers, while S&P Global’s flash PMI readings will be watched on Friday for fresh clues about an impending recession.

ECB meeting: too early to slow down?

As the biggest risk from the Fed meeting is how out of lockstep markets have become, the main uncertainty about the ECB gathering is the incoherent communication, amid signs of a split among Governing Council members between those favouring a 75-bps hike on Thursday and those preferring 50 bps.

Investors have made up their minds, pricing in a 75% probability of a 50-bps increase. That leaves some scope for disappointment should the ECB not hike rates by 75 bps. There’s also a downside risk for the euro from the Bank’s latest macroeconomic projections should they point to a recession in 2023 or if President Christine Lagarde suggests an inflation peak is just around the corner.

However, markets may be underestimating the ECB’s determination to get a grip on inflation, particularly as the Bank’s own survey shows consumer inflation expectations creeping higher in the Eurozone.

Moreover, even if the ECB were to raise rates by only 50 bps or signal a slower pace at its next meeting, Lagarde could still surprise with a hawkish tone. That, combined with the Fed not sounding as hawkish, and the euro might just be able to stretch its recent gains and have a crack at the $1.06 level. 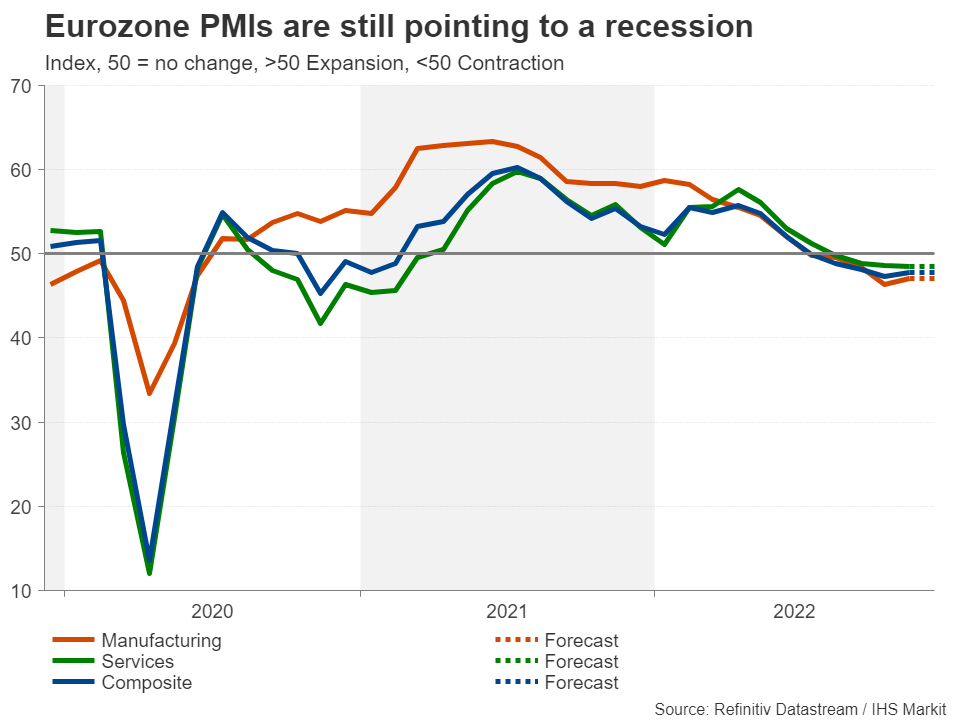 The final hurdle for the single currency next week will come on Friday when the flash PMIs for December are due. Analysts are forecasting no change in the manufacturing and services PMIs compared to November, with both readings expected to remain in contraction territory below 50.

Another central bank that could ease its foot off the brakes is the Swiss National Bank. After a 75-bps increase at its last meeting in September when the SNB lifted its policy rate out of negative territory, it may be time to proceed more cautiously. After all, annual inflation in Switzerland has flatlined at 3% and the clouds over the global economy are darkening.

The question is, will the SNB make a drastic shift and raise rates by 25 bps, or will it opt not to stir things up and go with the market consensus of a 50-bps hike? The latter is more likely given that the SNB meets just four times a year and this could provide the Swiss franc with a bit of boost. 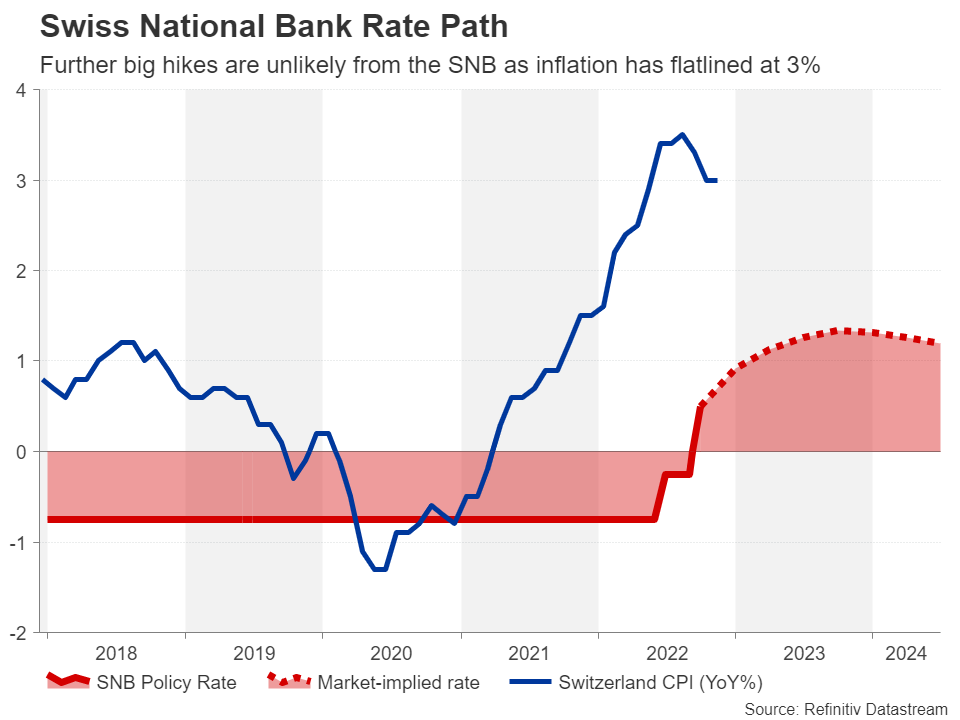 Having said that, even in the event of a bigger dovish tilt, the safe-haven franc would likely remain in demand over the coming year, especially versus the euro and pound, as recession risks mount for Europe and America.

The Bank of England is widely anticipated to raise rates for the ninth consecutive meeting on Thursday, with a 50-bps move being almost fully priced in. There are no new projections nor a press conference by Governor Bailey at the December meeting so any hints about the tightening path will come from the statement.

According to money markets, the Bank of England has the most hikes left to go in this tightening cycle among all the major central banks, and thus, there is less speculation about an imminent policy pivot. However, Britain also happens to be at highest risk of a recession and so next week’s barrage of UK indicators might steal the spotlight away from the BoE.

Monthly GDP figures will kick off the busy week on Monday and on Tuesday, the latest labour market report will be monitored for any signs of further job losses in October as well as an acceleration in wage growth. All eyes on Wednesday will be on the November inflation stats.

The consumer price index jumped to a fresh four-decade high of 11.1% in October. Any surprises in November could shape expectations ahead of the BoE’s decision the day after. Finally, retail sales numbers and the flash PMIs will wrap things up on Friday. 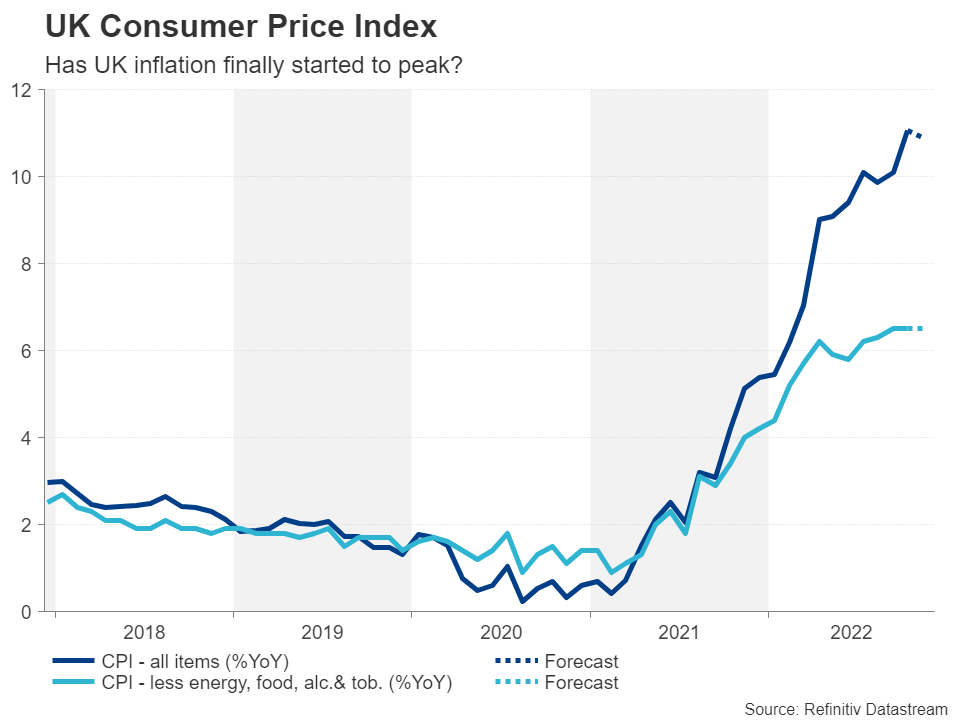 With the pound having established a floor at the $1.21 mark over the past week, that support may come under attack if the incoming data underscore the pessimism surrounding the UK outlook. However, as long as the dollar stays on the backfoot, the pound might still be able to maintain its uptrend. This would even more so be the case if next week’s policy announcements put the Fed and BoE on diverging paths.

An overload of major data

Elsewhere, Australian employment figures will be important for the aussie on Thursday, while the kiwi will be hoping for some direction from New Zealand’s third quarter GDP print the same day.

In Japan, it’s a packed week of economic releases, with the Bank of Japan’s quarterly Tankan business survey likely attracting the most attention on Wednesday, although the flash PMIs on Friday will be vital too. Whilst none of the data may be very market moving, they will help form an overall picture of the Japanese economy as the BoJ considers whether to start preparations for an eventual exit out of ultra-accommodative policy.

But in the meantime, the yen will be taking its cues from Fed policy as well as broader risk sentiment, which Chinese monthly indicators due Thursday will be contributing to.