Having locked in a second nomination as Fed chief, Jerome Powell surprisingly addressed the need for a faster taper of bond purchases during his testimony before the Senate's Banking Committee on Tuesday as transitory inflation is now viewed as something more persistent. Even more surprising, however, was the dollar’s reaction, which barely capitalized on the headlines, but the bulls have not completely lost their nerves as Friday’s US jobs data could provide another opportunity for a rebound.Powell switches to the hawkish side

The Fed had been stubbornly reiterating that high price pressures will be a transitory phenomenon but with core PCE inflation showing no signs of abating and the new omicron covid variation signaling prolonged supply crunches at the end of the year, the Fed chief clearly telegraphed that the transitory narrative will probably drop out of the policy statement.

He also admitted that the central bank would discuss the scenario of a faster bond tapering during the upcoming policy meeting, which was initially planned to start with a $15 billion monthly cut, simultaneously boosting speculation that the bond tapering phase may conclude before mid-2022 and eventually interest rates may rise earlier than expected.

To put the tightening procedures into action though, Powell highlighted that the central bank would keep a close eye on covid conditions and seek a confirmation signal from upcoming data releases. Hence, Friday’s nonfarm payrolls report could cause both rate hike expectations and the dollar to swing wildly.

Will the US labor market remain a high priority?

The question that arises at this point is whether the Fed will prioritize its price objective over its employment mandate in the coming months, taking more aggressive measures to mitigate the inflation spiral even before the labor market meets full employment conditions. If that is the case, a softer but healthy growth in employment could still be welcomed by the Fed in the face of relentless increases in consumer prices.

For the month of November, job growth is estimated at 550k compared to 531k registered in the previous month, with the unemployment rate expected to tick lower to 4.5% from 4.6% previously.

At a first glance, such results would not mark a big difference from November’s release, providing little reasoning for traders to alter their rate expectations and hence push the dollar higher. But if the jobs figures come above expectations, that could still be viewed as an extension of October’s rebound and provide extra evidence the Fed may move forward with larger cuts in bond purchases this month, unless of course omicron becomes the next burden for the global economy. 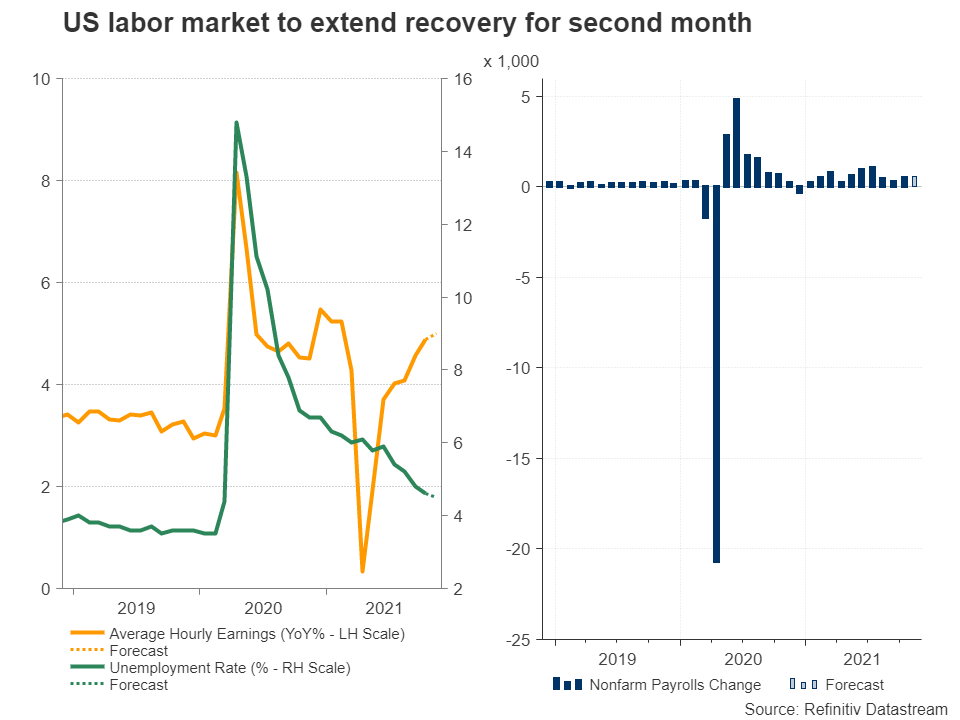 As regards wage growth, it could be a stronger market mover for the dollar. Apparently, a continuous increase in paychecks would bring some relief to consumers at a time when inflation is eating into their pockets. However, if businesses decide to offset higher wage costs by further raising their prices, making wages, consumption and inflation climb in lockstep, then the Fed may have another incentive to quicken monetary tightening. 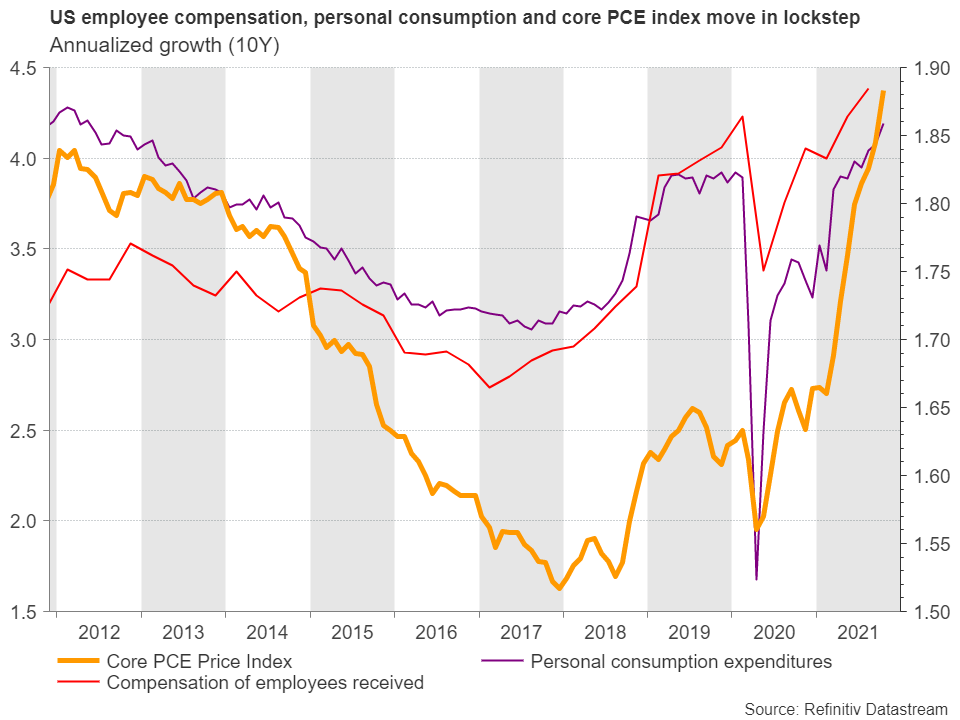 Currently, investors are pricing two rate increases for 2022 and a third one has also started to gain some backing recently. If nonfarm payrolls, and particularly annual average hourly earnings, which are projected to inch up to 5.0% y/y, beat expectations by a wide margin, euro/dollar may give up its recent gains to retest the 18-month low of 1.1185. The private ADP employment report has reduced the case for a significant upside surprise on Friday, but it’s worthy to note that the correlation between the two jobs reports has been mostly broken during the pandemic.

In the bearish scenario, where the NFP disappoints dollar bulls, euro/dollar may surge above the restrictive 20-day simple moving average (SMA) at 1.1370 and stretch towards the 1.1450 barrier. A steeper rally may face heavier resistance somewhere between the 50-day SMA and the descending trendline at 1.1550.