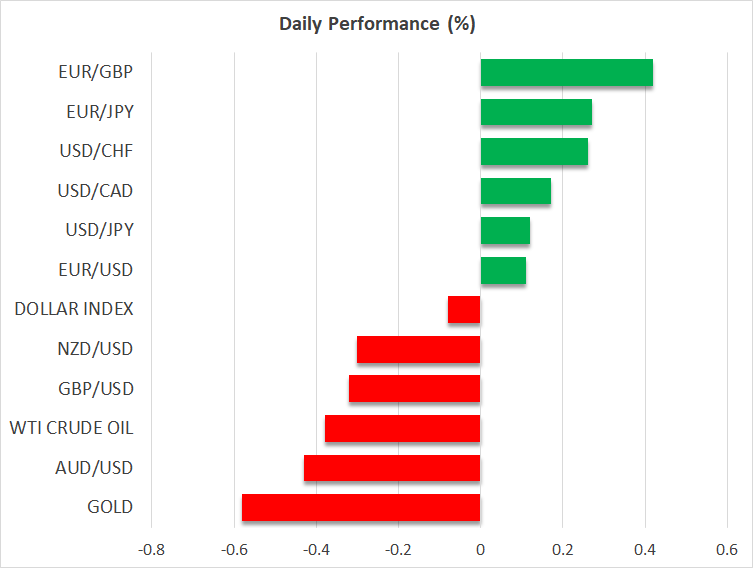 Fresh jitters about recessionary risks dented sentiment on Monday, weighing on stocks, oil and risky currencies, following some disappointing data out of China that greeted investors at the start of the week’s trading. Industrial production in the world’s second largest economy unexpectedly fell by 2.9% in the 12 months to April, while retail sales plunged by 11.1%, missing the forecasts by a wide margin.

Although investors were already expecting a significant hit to China’s economy from the lockdowns, the extent of the contraction has shaken confidence as the global growth outlook keeps deteriorating amid central banks’ battle against inflationary forces. China does not have the same inflation problem as the rest of the world but authorities’ efforts to stimulate the economy have left a lot to be desired.

On Sunday, the People’s Bank of China kept the rate on its medium-term lending facility unchanged but gave the go-ahead for banks to lower the mortgage rate for first-time house buyers. The latter was seen as a sign by some that the PBOC will cut its other policy rates – the one- and five-year loan prime rates – when it meets again on Friday.

With authorities remaining unrelenting with their zero-Covid strategy and taking only incremental measures to boost growth, news that Shanghai will reportedly begin to ease the city’s lockdown on June 1 provided only modest support to stocks.

China’s benchmark CSI 300 index closed down 0.8% but shares in Europe were mixed. London’s FTSE 100 was lifted by Vodafone after the United Arab Emirates’ state telecom company bought a 9.8% stake. But French and German stocks slipped as negative rates on the continent could soon become a thing of the past.

US stock futures were also under pressure, cutting short the rebound from late last week. The S&P 500 rallied 2.4% on Friday, while the Nasdaq Composite surged by 3.8%, paring most of the losses from earlier in the week. The earnings season may have started to wind down but is not completely over just yet as US retail giant Walmart will report its results tomorrow round about the same time as when the April retail sales report is due.

Any big miss in either report has the capacity to spark another selloff on Wall Street as the American economy is not totally immune to a slowdown, especially as the Fed is getting more and more determined to get inflation under control.

High inflation may not be hurting sales just yet but is undoubtedly worrying consumers as the University of Michigan’s closely watched consumer sentiment gauge plummeted in May’s preliminary reading to the lowest in over a decade.

Markets will also be on standby for any new signals on the pace of tightening by the Fed as a number of policymakers are due to speak over the next three days, including Chair Powell tomorrow.

The mounting fears of a major economic downturn in China and elsewhere dragged the Australian dollar down the most in the currency markets. The aussie briefly fell below $0.69 before climbing back above the level as the mood improved a little into the European session.

The pound also underperformed on Monday as the threat of stagflation looms over the British economy. Another headache for sterling is the increasing likelihood that Boris Johnson will tear up the Northern Ireland protocol, which is a key part of the Brexit agreement with the EU, as early as this week.

The euro on the other hand managed to notch up small gains on growing expectations that the European Central Bank will announce an end to its asset purchase programme earlier than anticipated at its June meeting, as well as flag a rate hike for July. ECB policymakers have been out in droves lately, paving the way for a summer rate hike as inflation is surging across the Eurozone. Interestingly, the euro’s weakness has also come under policymakers’ radar as per Villeroy’s comments earlier today.

The single currency hit an almost five-and-a-half year low of $1.0348 last week on concerns about inflation and the impact of the Russia-Ukraine conflict. Geopolitical tensions are in danger of flaring up again as Sweden and Finland – both of which border Russia – plan to submit their applications to join NATO. But the euro is holding ground today against the US dollar, rising to around $1.0420.

The Japanese yen was mixed, allowing the greenback to advance slightly above the 129 level.