A booming economy, soaring commodity prices, so why is the aussie not rallying?

The Australian dollar made a spectacular rebound from the March 2020 nosedive against the US dollar. But although Australia’s economic recovery has gone from strength to strength, the rally has stalled since March this year. There are a number of factors that could be dampening the positive mood music, negating some of the boost from higher commodity prices. But the real driving force behind the aussie’s sideways action of late is the flatter yield spread between Australian and US government bonds. However, with both the Fed and RBA potentially signalling taking their feet off the accelerator in the coming weeks, are the calm waters about to be roiled?Embracing QE

Despite being relatively new to the game, it’s fair to say that the Reserve Bank of Australia has fully embraced quantitative easing (QE), having embarked on asset purchase as well as yield curve control programmes since the virus crisis first unfolded. It’s probably also fair to say that the policies were carefully and deliberately devised: pinning the yield on three-year Australian government bonds (AGB) at the same level as the cash rate gives a very strong forward guidance on how long rates will stay low, while an asset purchase program directed primarily at the 10-year yield further keeps speculators at bay. 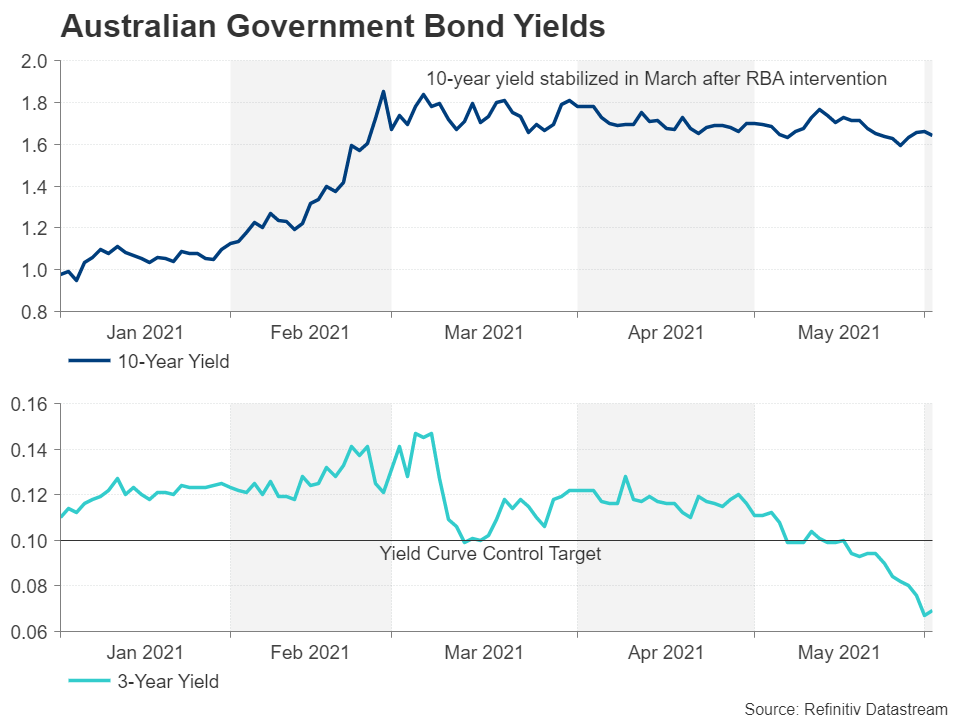 Without a doubt, the two policies have been successful at restraining the aussie’s advances, especially since March when the RBA doubled down on its QE commitment. The RBA’s balance sheet has swelled since then when a spike in AGB yields prompted both a verbal and bond market intervention. Consequently, the aussie hasn’t been able to surpass its February year-to-date peak even though the US dollar has been on a broad retreat from April and other currencies like the pound and Canadian dollar have risen to fresh highs. 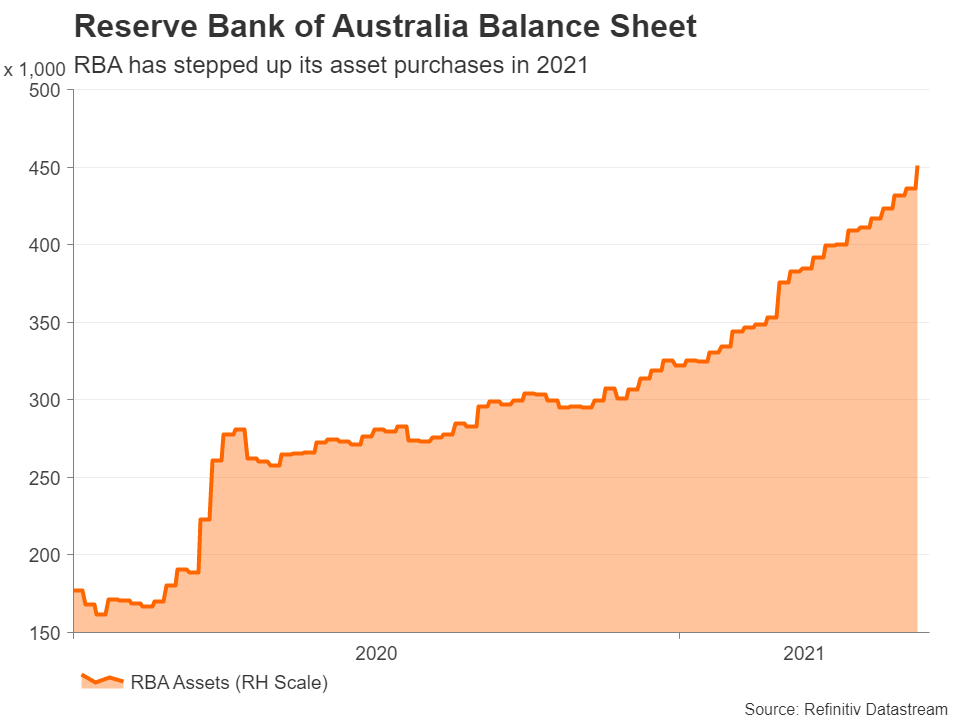 What makes the aussie/dollar pair’s resistance to upside moves even more unusual is that real yields in the United States have been falling as inflation expectations have ballooned, adding further downside for the greenback. Not only that, the price of commodities, and in particular, industrial metals – Australia’s main export – have skyrocketed in the past couple of months. Copper and iron ore futures are up more than 30% in the year-to-date, and with demand likely to stay strong due to their use in many industrial and tech components, as well as of course in electric vehicles, the Australian currency should be on a roll. 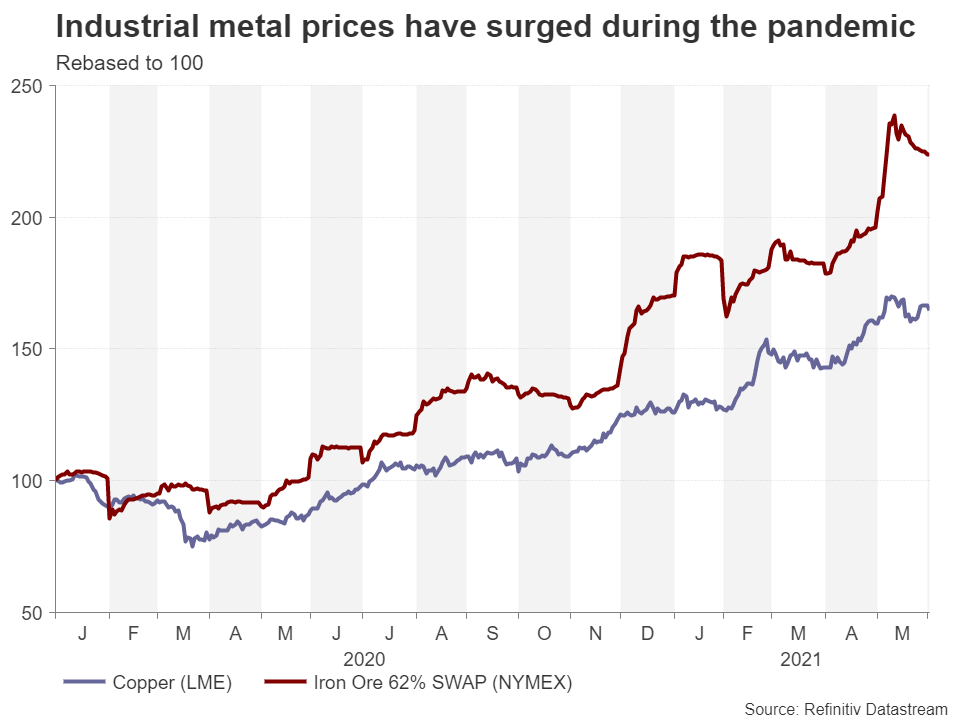 After all, the economy is definitely reaping the benefits of the shift towards electric vehicles and the general boom in global manufacturing, which are driving this surge in metal and other resources prices. Australia’s GDP grew by a better-than-expected quarterly rate of 1.8% in the three months to March, more than recovering from the pandemic slump. The labour market has also rebounded impressively, and the unemployment rate should soon fall to pre-pandemic levels of around 5%.

Yield spreads are at work

So what’s keeping the rangebound aussie so tamed? Surely currencies have defied yields before. The economic fundamentals and the wider market risk-on theme certainly support the case for a stronger exchange rate. It could be that Australia’s slow vaccine rollout is denting investor confidence about the outlook. Rising tensions with China might possibly be another reason as exports to Australia’s biggest market are on the line due to Canberra siding with Washington on foreign affairs matters. However, although both factors have the potential to erupt into something bigger in the future, especially the latter, they’ve yet to make a mark on the markets and are low on the list of investor concerns right now.

Thus, everything points to the aussie’s underperformance coming down to the yield differential between Australian and US sovereign bonds, which narrowed substantially in March. However, it’s important to highlight here that yield spreads are underpinned by central bank policy and a significant change in policy direction is looming on the horizon for both the Federal Reserve and the RBA. 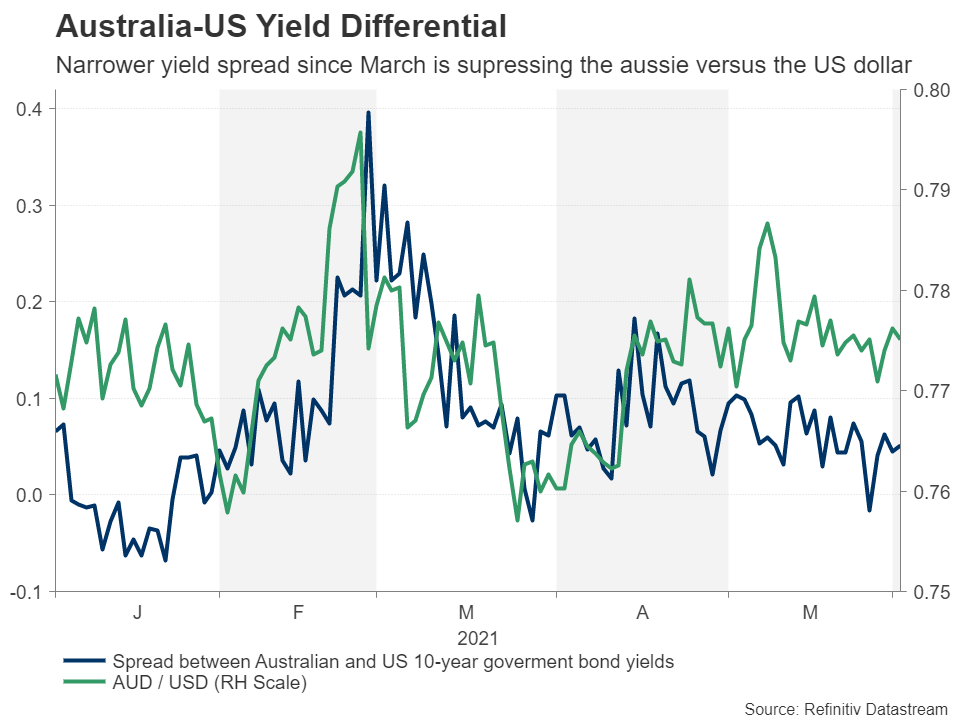 Who will taper first?

The Fed could signal that it will soon begin winding down its QE as early as at its June meeting in just under two weeks’ time, while the RBA has already flagged a major announcement is on the way at its July gathering. However, it may be wrong to assume that this would represent the end of the RBA trying to out-dove the Fed and the start of a new race to exit the pandemic stimulus.

In all probability, the Fed will try to stay as dovish as possible, soothing tapering jitters at every opportunity. But what’s more important is what RBA policymakers decide in July. Rumours suggest the Bank will launch an open-ended bond buying plan. A weekly target of AGB purchases to be reviewed periodically could replace the latest QE round of A$100 billion when it expires in September.

The RBA may out-dove the Fed

Such a move might be powerful enough to prevent the 10-year yield from shooting higher as the RBA gradually withdraws from the bond market, and all the indications are that this will indeed be a slow process.

The RBA has made it clear it wants to see wage growth reach 3% sustainably; it is currently half that at 1.5% year-on-year. Policymakers think this is crucial in getting inflation to climb and hold within their 2-3% target band. But with annual CPI at just 1.1% in Q1, there’s a long way to go and most likely, much longer than what it will take for the Fed to achieve its objectives given that inflation is already surging in America. 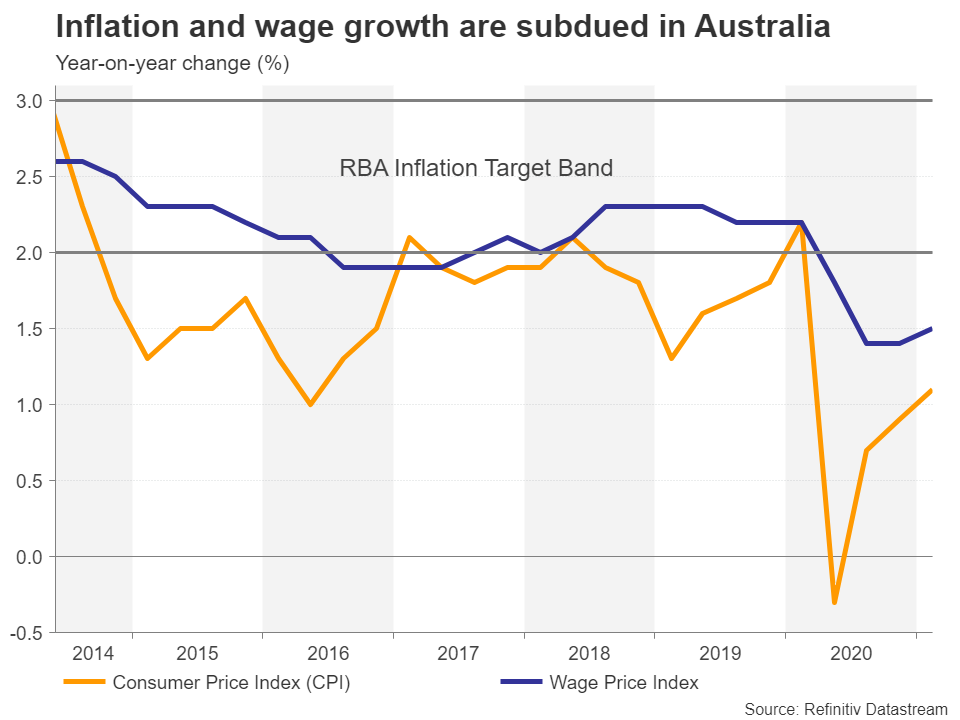 Is the only way down for the aussie?

So where does all this leave the Australian dollar? If such a scenario were to play out, it’s hard to see the aussie resuming its uptrend against the greenback anytime soon. After consolidating for more than three months, aussie/dollar’s 50-day moving average (MA) has flatlined and the pair’s medium term outlook is distinctly neutral.

If the aussie is unable to smash its February high of $0.8007 soon and continues to hover around the 23.6% Fibonacci retracement of the latest upleg, it will only be a matter of time before the 50- and 200-day MAs meet. This could set the stage for a deeper retracement, turning attention to the 50% and 61.8% Fibonacci levels of $0.7497 and $0.7377, respectively.

As things stand, yield dynamics are overriding the robust fundamentals for the aussie, weighing down on the currency. Those dynamics could well change in the next few weeks but the odds at the moment are stacked against the aussie.