The last time there was so much panic in the markets about higher inflation was probably in the 1970s when oil price shocks were a common phenomenon. Although there’s not as much chance of inflation hitting the double digits this time round, major central banks are for the first time in decades facing the prospect of missing their upper price targets by a substantial margin. However, all the excitement may yet prove to have been about nothing as the global recovery is suddenly under threat from a new Covid strain and optimism about a full economic reopening is waning.

One of the unintended consequences of lockdowns during the pandemic have been the severity of disruptions on production and supply chains, which have resulted in worldwide shortages of key components, bottlenecks as well as pushing commodity prices spiralling higher. Add to this the pent-up demand that has been unleashed as economies reopen, and it’s no wonder that the prices of goods and services worst hit by the shutdowns are soaring. 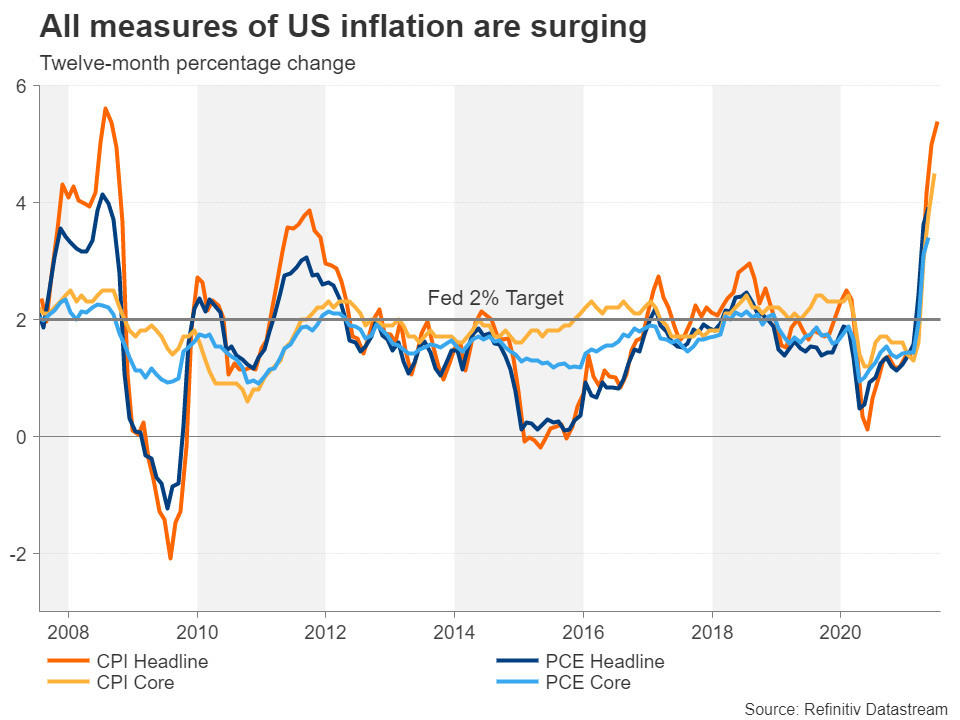 Central banks, notably the Federal Reserve, are insisting that these effects will be transitory and that once the supply-side issues are resolved and the demand boost from the reopening fades, inflation will fall back. But the big question for the markets has always been about how soon these supply disruptions will sort themselves out, and with the added threat of wage inflation, investors have been more worried about these price hikes becoming “sticky” than policymakers have.

Another day, another virus scare

However, inflation jitters appear to have taken a backseat lately as fears that the rapid spread of the Delta variant around the world will derail the full reopening of the major economies is now seen as a bigger headwind. Investors have been steadily pouring into safe havens since June, but that trend accelerated this week as the Delta outbreak is showing no sign of abating.

Having first ripped through Asia, this new more dangerous strain is currently sweeping across Europe and infections are creeping higher in the United States as well. Some traders are already predicting that lockdowns will become necessary again by September and the narrative that vaccines will bring an end to the pandemic is beginning to crumble.

All this has sparked a reversal in the reflation trade that had boosted riskier assets while hammering sovereign bonds. But bonds are now rallying at their strongest since the height of the virus crisis and Treasury yields are sinking; the 10-year US yield has plummeted to 5-month lows, dropping below 1.20%. 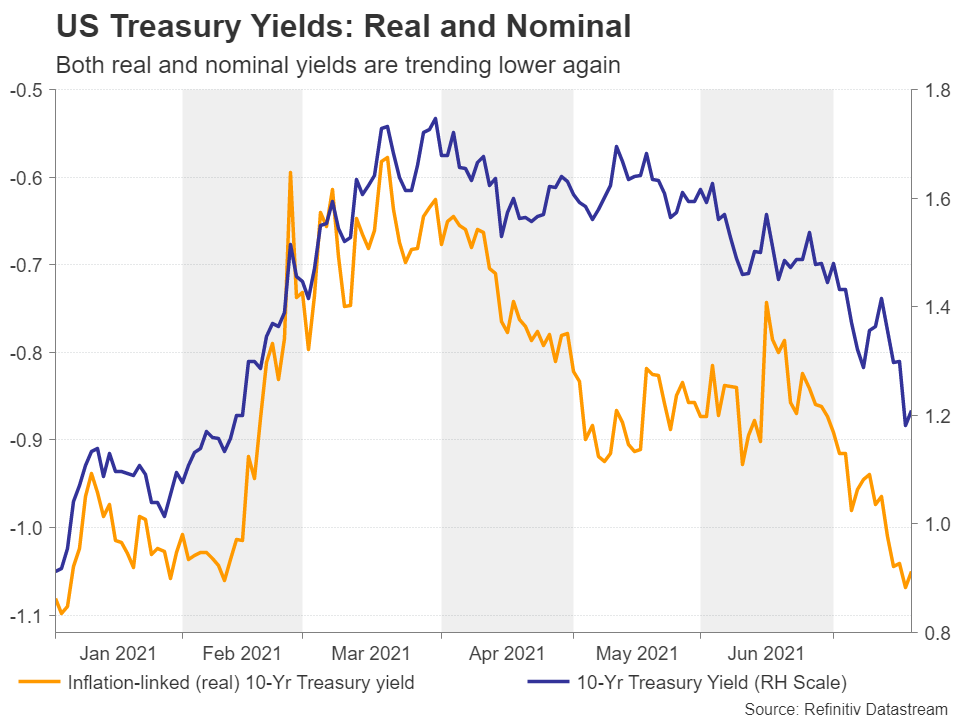 The slump in yields indicates investors are turning more wary about the outlook, paring back their earlier optimistic growth expectations as the latest virus escalation looks set to hinder the recovery in a growing list of countries. Safe-haven currencies such as the Japanese yen and Swiss franc are also enjoying a revival on the back of the risk-off trades. But the most impressive rally has been that of the US dollar, which has surged even as both nominal and real US yields have plunged.

The dollar index has broken above the 93.0 level for the first time since early April and its 50- and 200-day moving averages look poised for a bullish crossover. If the bullish momentum is sustained, the index could soon surpass the March 31 peak of 93.437 and head towards the 123.6% Fibonacci extension of the March-May downtrend at 94.358.

As far as the major dollar crosses are concerned, the $1.17 handle is at risk for the euro, the $1.3530 Fibonacci level for the pound and the $0.7230 Fibonacci mark for the Australian dollar, should the greenback continue to draw safe haven flows.

Worst might be over for euro, not so much for the pound and aussie

Interestingly, having already taken a heavy beating in June on diverging monetary policy paths between the Eurozone and America, the euro’s downside could be milder than that of the pound and aussie if the latest virus wave doesn’t recede quickly.

That is because investors had placed more hawkish bets for the Bank of England and the Reserve Bank of Australia than for the European Central Bank, which was on a more dovish path even before the Delta variant broke loose around the globe. How the United Kingdom, in particular, copes with the fresh spike in infections will be watched by the rest of the world.

Britain has lifted almost all restrictions despite daily virus cases skyrocketing to the highest since January as the government is banking on the country’s high vaccination rate to keep hospitalizations and deaths low. However, scientists have accused the government of a “dangerous and unethical experiment” because letting the virus run rampant might create the ideal breeding ground for vaccine-resistant mutations. 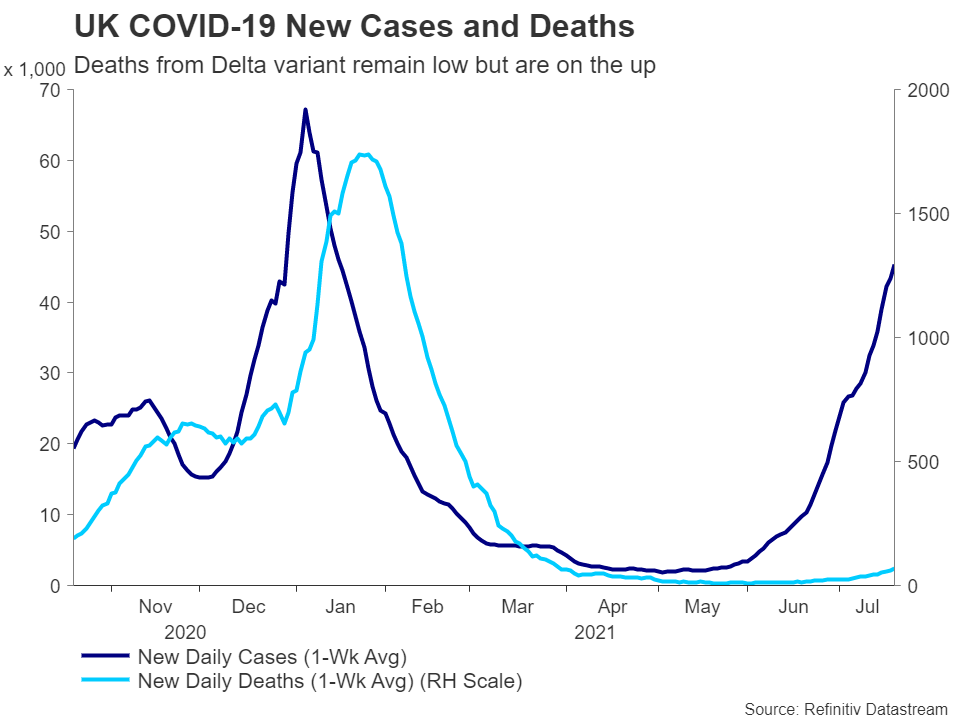 But aside from that, the uncontrollable spread of the Delta strain has already started to put pressure on hospitals, suggesting that even with vaccines, some degree of social distancing is required. If in the coming weeks, the UK government is forced to backtrack on its ‘Freedom Day’ pledge, that could be a sell signal not just for the pound but for risk assets in general such as stocks as it would be a warning for other countries too.

In Australia, the situation is somewhat different as the nation had until recently, been able to avoid prolonged lockdowns. But the highly contagious Delta variant emerged at a time when Australia was only just getting started with its vaccine rollout. The longer it takes for the latest lockdowns to be lifted, the more likely the RBA will keep its QE programme running for longer and possibly even reverse the recently announced reduction in bond purchases. This could spell disaster for the aussie. 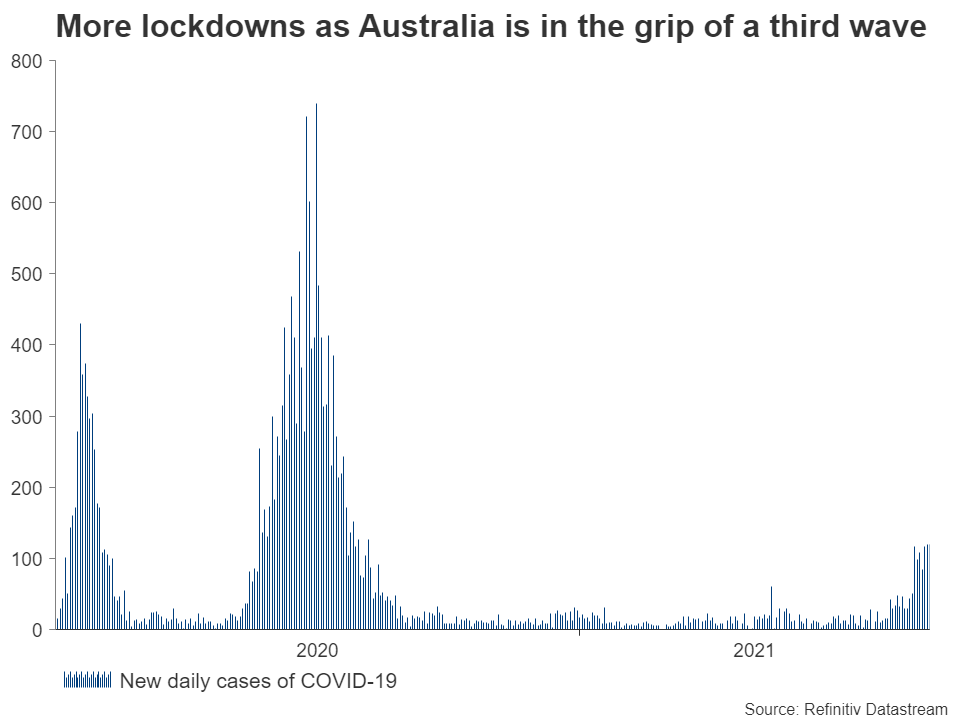 Taper or not, dollar is safe

However, for the greenback, more negative virus headlines would probably bolster it further, even if the Fed’s plan to start taper discussions in the summer is also thrown off course, as it’s safe-haven status should protect it. The biggest downside risk for the dollar right now is if infection rates in Europe and Asia begin to slow, easing fears about the growth outlook, and markets can breathe a sigh of relief. Then, the focus would turn back to US inflation and how soon and at what level will it peak.

The return of stagflation?

But what if the Delta outbreak were to worsen in the coming months and the global economic rebound is materially set back? Demand would be supressed again and the inflation problem might go away, but only temporarily. The trouble is, more lockdowns could further exacerbate the supply chain issues in the long run. This may then create the perfect conditions for stagflation as governments reach the limits of their fiscal purse strings and economic growth is unable to bounce back as strongly.

Such a scenario would pose an even greater headache for central banks than the current balancing act of supporting the recovery without stoking inflation. But for the Fed, it will likely press on with a debate on tapering its asset purchases and the uncertainty in the run up to a possible flagging of a decision at the Jackson Hole summit in late August could itself be contributing to the volatility in the bond markets.

Either way, the next few weeks will be crucial on three fronts: first, will the Fed will go ahead and taper and how gradually will it do so, second, will inflationary pressures show signs of subsiding, and lastly, will virus numbers continue to spike at a worrying rate.