Will oil prices climb back above $100?

While oil prices have plunged by 65% since March’s peak, the latest upturn made investors wonder whether the energy crisis will trigger a new bullish episode in the market. Despite recession headwinds, geopolitical developments could still bring the bulls back into play.  The geopolitical boost

WTI crude and the international benchmark Brent oil trimmed more than a third of their outstanding 2020-2022 upleg, marking a nine-month low within the $80 region at the end of September. But since then, oil prices have been gently trending upwards, raising questions about whether this is the start of another bullish rally to $100.

From a fundamental perspective, there are a couple of confluences which make predictions difficult. Geopolitical tensions over Russia’s invasion in Ukraine are keeping investors on their toes. Russia’s recent withdrawal from Kherson, which is on the right side of the Dnipro River and operates as a supply corridor from Crimea, sparked speculation that Moscow’s military power is diminishing. However, there is a strengthening defence line on the other side of the river. Hence, unless there are sustained heavy losses in military units, Russia may not easily give up the war.

A senior US official revealed that the final details of implementing a price cap on Russian oil exports will be ready by December 5. An immediate retaliation from Moscow in the form of reduced energy supplies to the countries which will accept the mechanism, could worsen the energy crisis next year.

Note that the EU has successfully secured enough inventories for the winter, though whether it will find enough sources to respond to demand in 2023 is questionable. Whether the measure will motivate the major buyers of Russian oil, China and India, to negotiate lower prices with Moscow as recession risks grow, is another question. 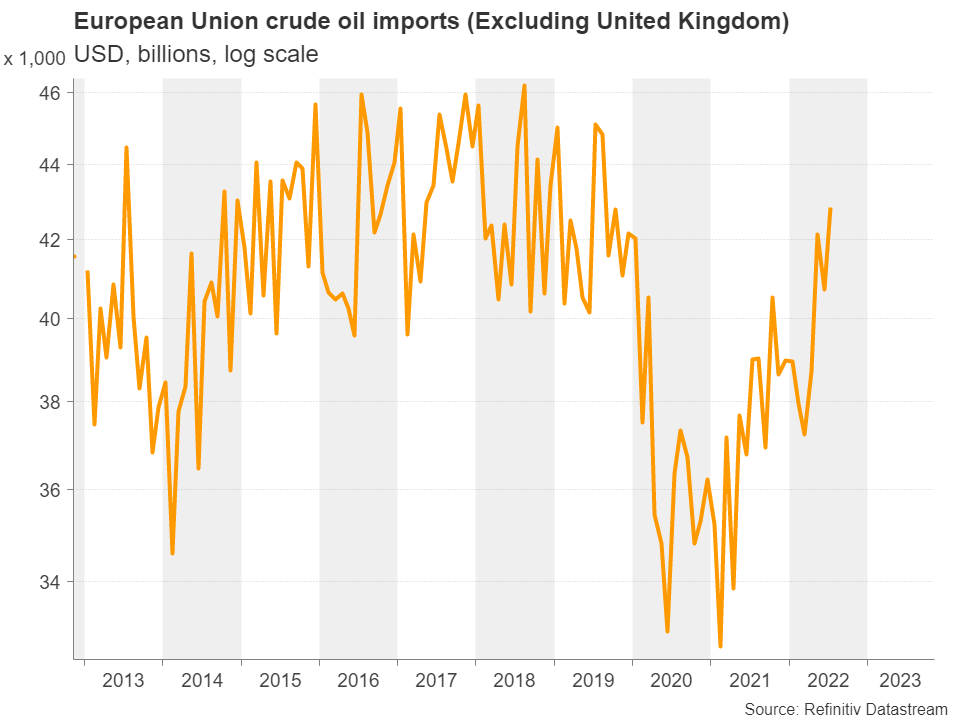 OPEC will remain a key player in oil markets too. The cartel of oil exporters led by Saudi Arabia and its allies, including Russia, cut daily production by an outstanding amount of 2 mln bpd in November on concerns of a global growth slowdown.

The output is expected to remain restrained in the medium term according to OPEC's latest monthly report, with Oman's energy minister admitting that December’s decision will be subject to the EU’s economic outlook. If recession risks worsen in the area, the group may have one more reason to extend its output cuts.

Besides, with crude producers foreseeing underinvestment in the energy sector in the foreseeable future and a shift to renewable energy products, they would like to receive higher revenues for longer despite making huge profits over the past year. 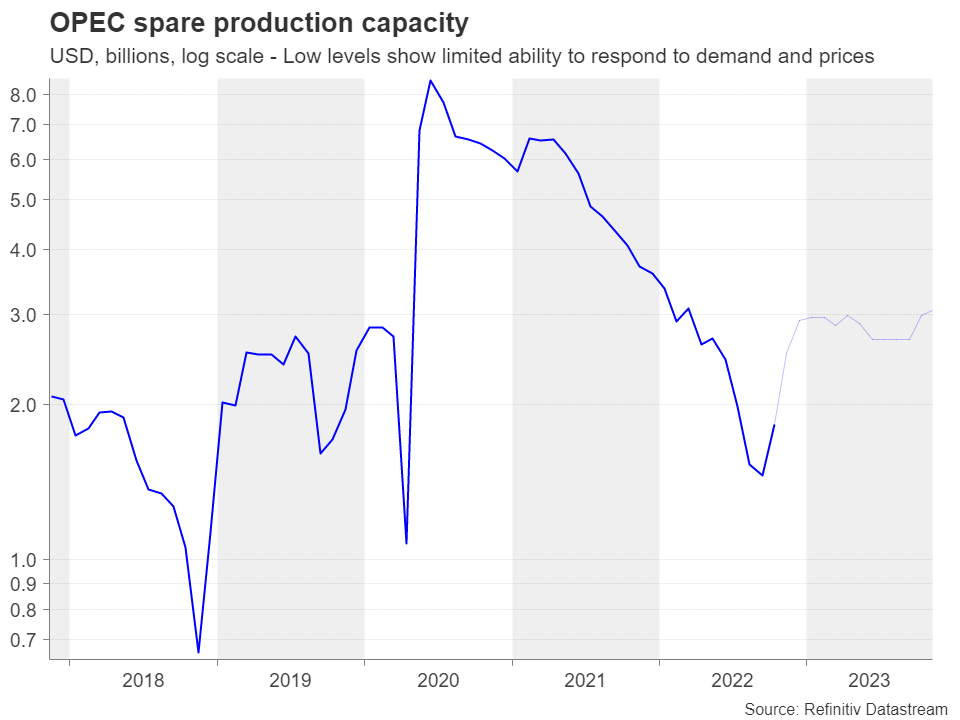 Consequently, the above could add more pressure to the US president, who has been criticized for the handling of high energy prices. Another spike in oil prices and reduced production from OPEC and Russia may force the government to release more inventories in order to meet demand and balance high prices.

A nuclear deal with Iran, which would resume oil exports from the country, is not near either. The US Energy Information Administration (EIA) expects a fall in global inventories and Brent prices hovering within the $90 territory in 2023. 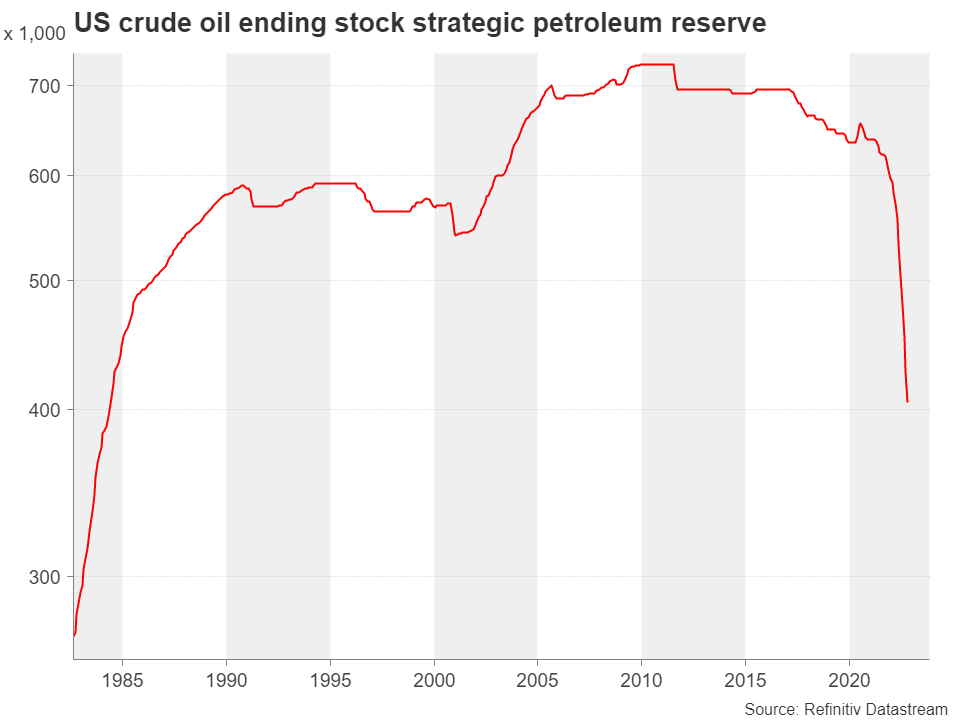 Recession not fully priced in

On the demand side, there is no clarity about when and how recession will hit the global economy. A year-long course of continuous sharp interest rate increases and falling savings rates may have a delayed effect on inflation and consumption during the next few years, with the IMF projecting a period of 3-4 years before monetary policy tightening has its peak effect on inflation.

Given that recession is not fully priced in by analysts, any surprises in data releases could navigate oil prices accordingly. Nevertheless, with China gradually lifting some of its zero-covid measures recently, and the long rally in the dollar showing signs of fatigue on the back of a less hawkish Fed, oil prices could enjoy some strength in the short term. 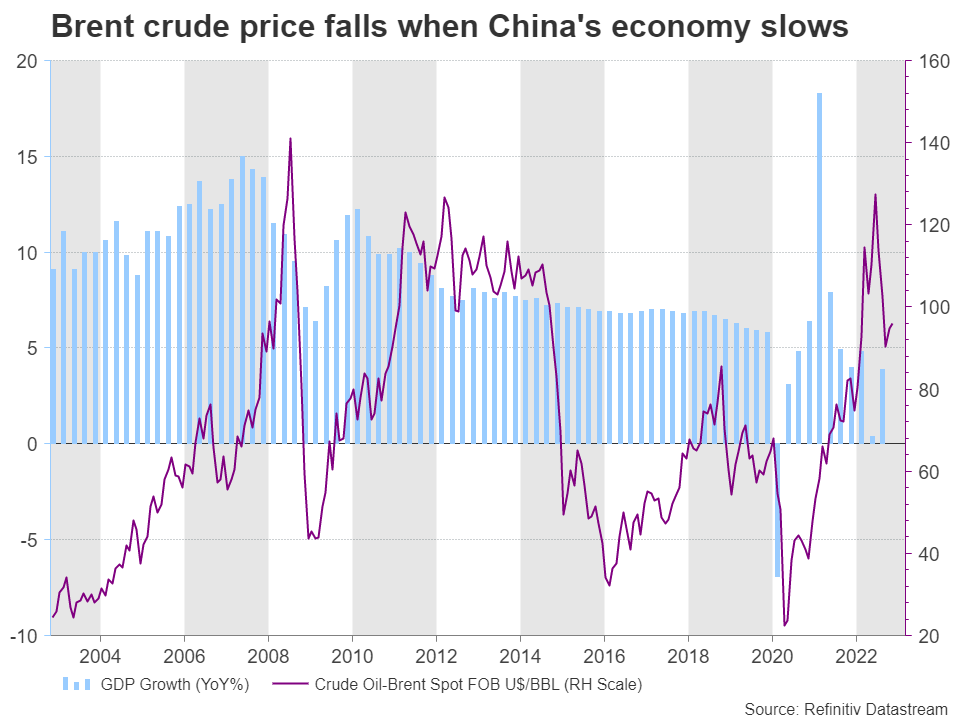 Looking at charts, WTI crude has been softly trending up above September’s lows despite the rejection from the long-term support-turned-resistance line in October. The latest pullback found a strong footing around the 50-day simple moving average (SMA) at $92.60, resuming hopes for a bullish continuation. A decisive close above the $99.00 resistance could help the price crawl straight up to the 200-day SMA and the constraining line at $103.20. Slightly higher, the $107.70 territory might be the next target.

Otherwise, a correction to the downside could initially retest the $92.70-$92.00 zone. Failure to pivot here could press the price towards $87, while lower, the door would open for the $83.65 low.

Central banks actions - what is the market pricing in for the remainder of 2023?