Economic data out of the United Kingdom will be flooding the markets over the next few days with Tuesday’s monthly GDP print being the main highlight. The scheduled releases on growth, production, inflation and employment should reveal how the economy fared in May and June when Britain was gradually emerging from lockdown. But as output recovers from a record drop in April, the pound has moved to the bottom of the 2020 performance table as investors fear about the UK’s consumption driven economy, as well as of course Brexit.

Boris Johnson’s government finally appears to be getting to grips with the coronavirus outbreak in the UK, with scaled up testing and a slow exit from the lockdown helping to bring the daily cases of new infections down to the 500 region. But as the government lifts the last remaining restrictions, allowing pubs, hotels, gyms and leisure centres to reopen, will the public feel safe enough to venture out of their front doors? 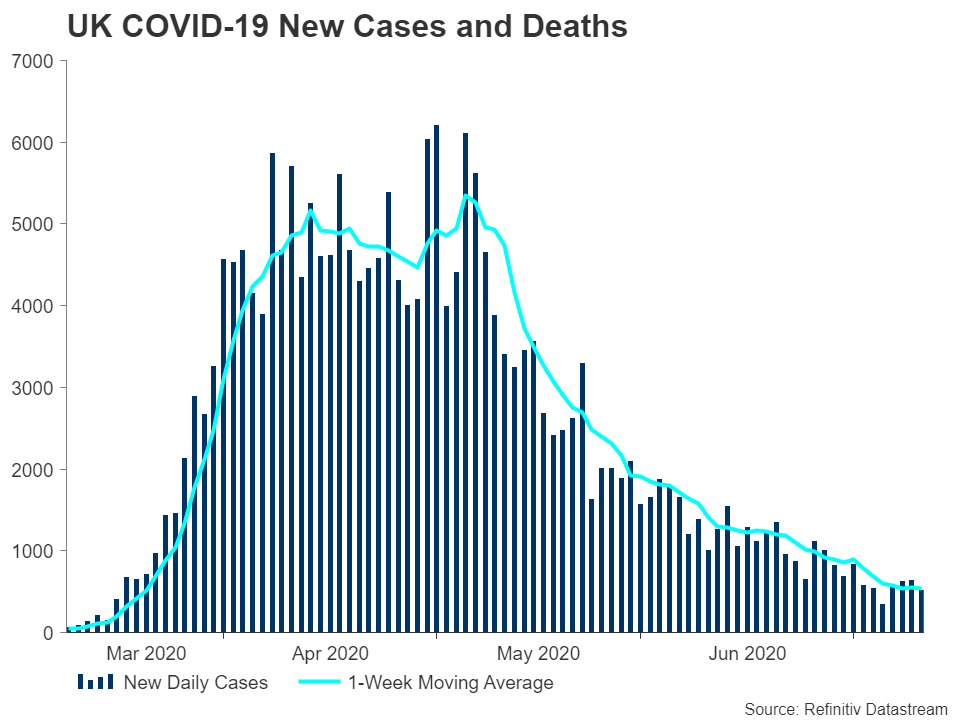 Despite images of (mainly young) Brits flocking to the parks, beaches and pubs in recent weeks, the vast majority of the country is hesitant to go out for anything but essential journeys. So much so that Prime Minister Johnson has been urging people to return to their workplaces to boost food and retail outlets in deserted town centres. The UK’s finance minister, Rishi Sunak, even announced a 50% government discount for anyone eating at a restaurant, Monday to Wednesday during August, in a bid to save the devastated hospitality sector.

GDP to rebound in May, but road to recovery is long

Private consumption makes up about two thirds of the British economy so a pandemic crisis of this nature that requires social distancing does not bode well for it. This is one of the reasons why gross domestic product (GDP) dived by an incredible 20.4% month-on-month in April when consumers were forced to remain indoors. GDP is expected to have recouped some of that lost output in May, with analysts forecasting a rebound of 5.5% m/m.

The GDP estimate will hit the headlines at 06:00 GMT on Tuesday and will be accompanied by industrial and manufacturing numbers for the same month, as well as trade figures. After suffering a double-digit percentage drop in April, industrial production is projected to have increased by 6.0% m/m in May. 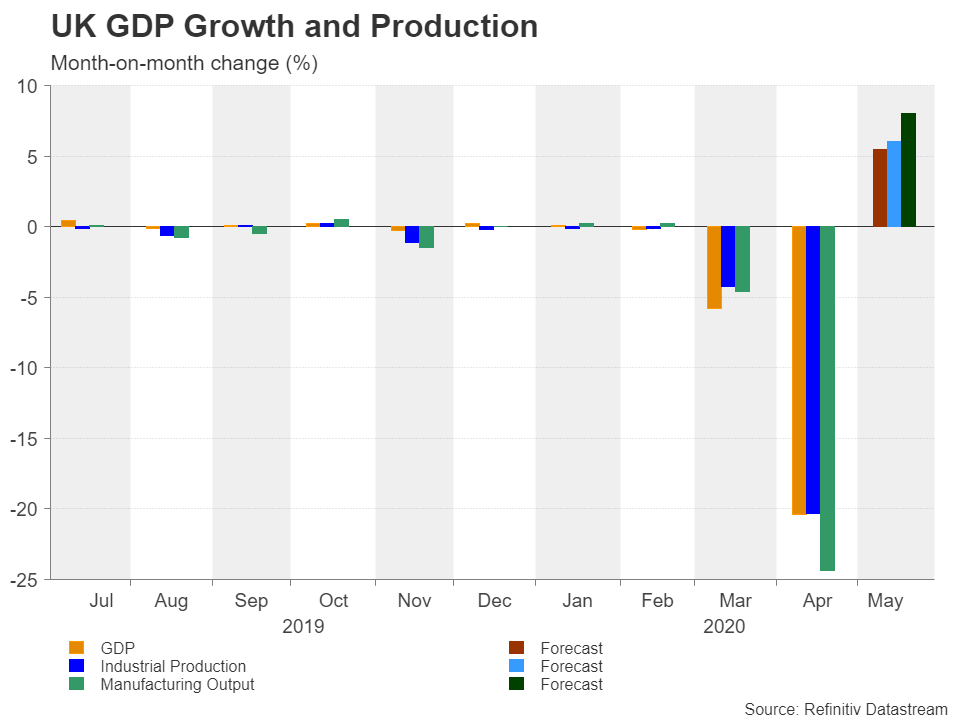 Inflation on the way down, jobs losses on the up

Inflation will be the next set of data to be watched this week when it’s released on Wednesday. The UK’s consumer price index (CPI) is projected to have eased further year-on-year in June, falling to 0.4%, which would make it a four-year low. However, the annual declines in factory input and output prices are forecast to have moderated in June, which should help ease concerns about deflation.

Finally, the latest employment figures are bound to attract plenty of attention on Thursday amid a growing number of UK companies announcing big job cuts recently. Employment is expected to have fallen by 234k in the three months to May, while average weekly earnings are anticipated to have turned negative, decreasing by 0.4% y/y. Investors will also be keeping an eye on the claimant count of unemployment, which is more up-to-date. The number of people claiming jobless benefits is expected to have jumped by a further 250k in June after surging by 529k in May. 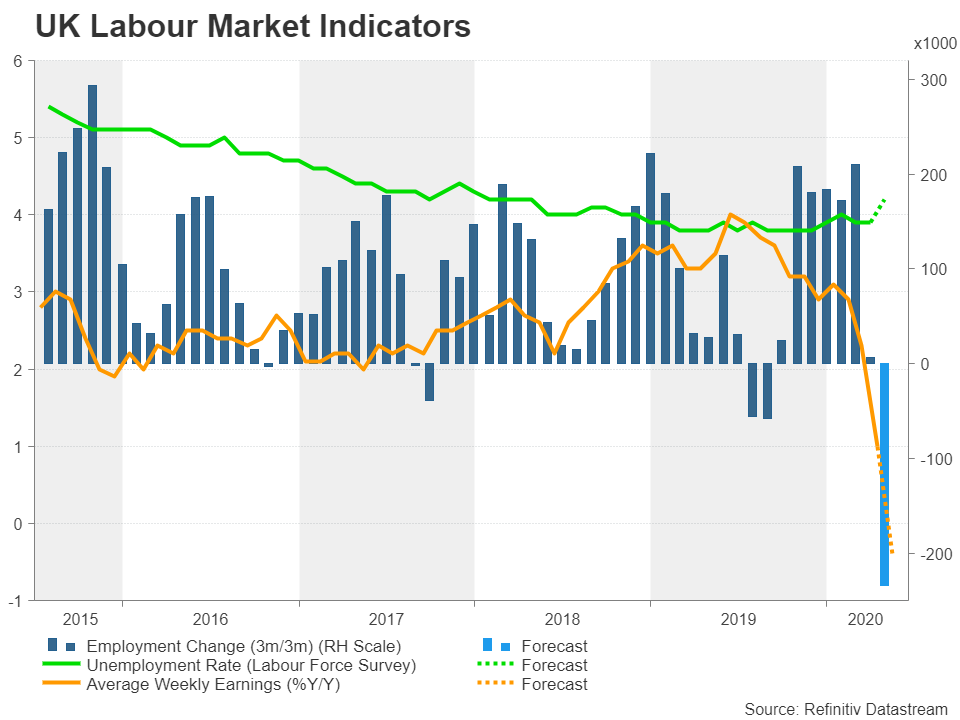 Pound being capped by 200-day MA

The pound looks set to enjoy a bumpy week as it rides the storm of data. Broadly positive indicators out of the UK could help cable break the immediate resistance at its 200-day moving average (MA) just below the $1.27 level. Clearing that hurdle would open the way for the 78.6% Fibonacci retracement of the March downleg at $1.2815, while higher up, the $1.30 mark would be the next target for the bulls.

To the downside, the 61.8% Fibonacci of $1.2513 and the 50-day MA at $1.2433 are the initial support areas that could halt any selloffs should the data deepen concerns about Britain’s economic outlook and its burgeoning national debt. But a more critical level to be watched is the 50% Fibonacci at $1.2302.

However, although the pound will be taking note of the incoming releases, it could be the overall risk sentiment in the markets that determines the strength of those moves. Upward advances could in particular be amplified by any improvement in broader risk appetite given that the pound has been the biggest laggard in the FX arena this year against the mighty US dollar. Brexit uncertainty on top of the virus fallout is hampering sterling’s efforts to regain a positive footing as Johnson is adamant that the transition period after leaving the EU ends on December 31, 2020. 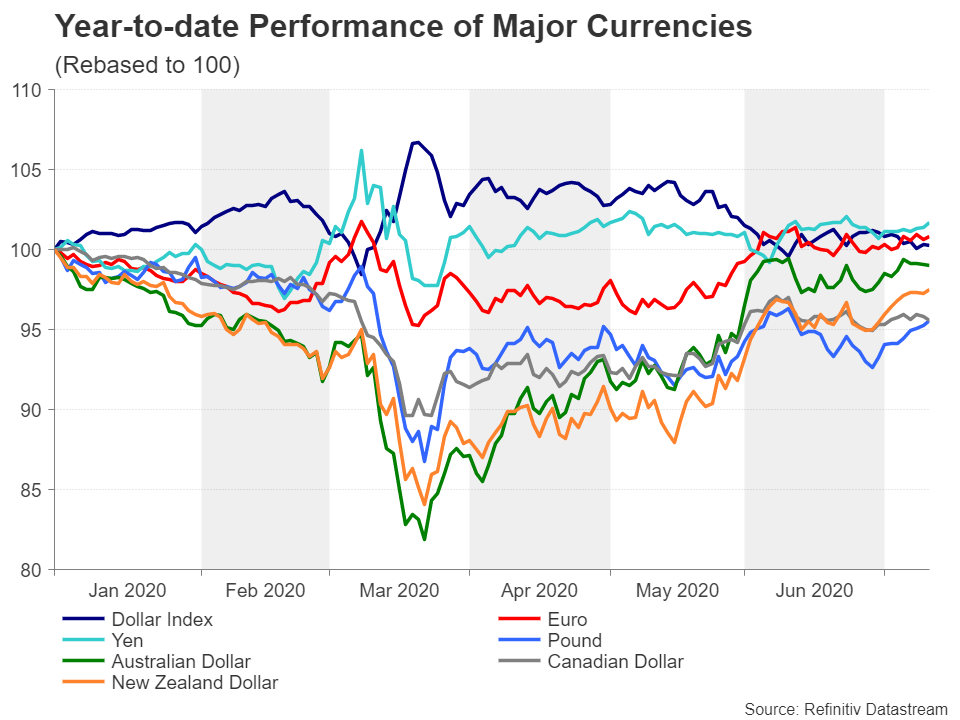 With little time left for negotiations for a post-Brexit trade deal, there have been some signs of compromise lately, but as the negotiations likely stretch into the 11th hour, the pound will have a hard time winning investors’ confidence even if the economy recovers quicker than anticipated.