Inflation in the United Kingdom probably surged further in July, data out on Wednesday (06:00 GMT) is expected to show. Britain already has the highest inflation among the major economies and looks on course to become the first advanced nation in decades with double-digit CPI growth. Unless there’s some surprise weakness in any of the CPI components, the data will likely reinforce expectations of another 50-basis-point rate increase by the Bank of England in September, though this may not necessarily be positive for sterling.  Just shy of 10%

Britain’s consumer price index accelerated at an annual rate of 9.4% in June, reaching the fastest pace in 40 years. There was some good news for underlying inflation as CPI moderated for the second straight month, rising by 5.8% y/y when food and energy prices are stripped out. But the overall picture is expected to get ugly again in July as headline CPI is forecast to have jumped to 9.8%, while core CPI is predicted to have edged back up to 5.9%. 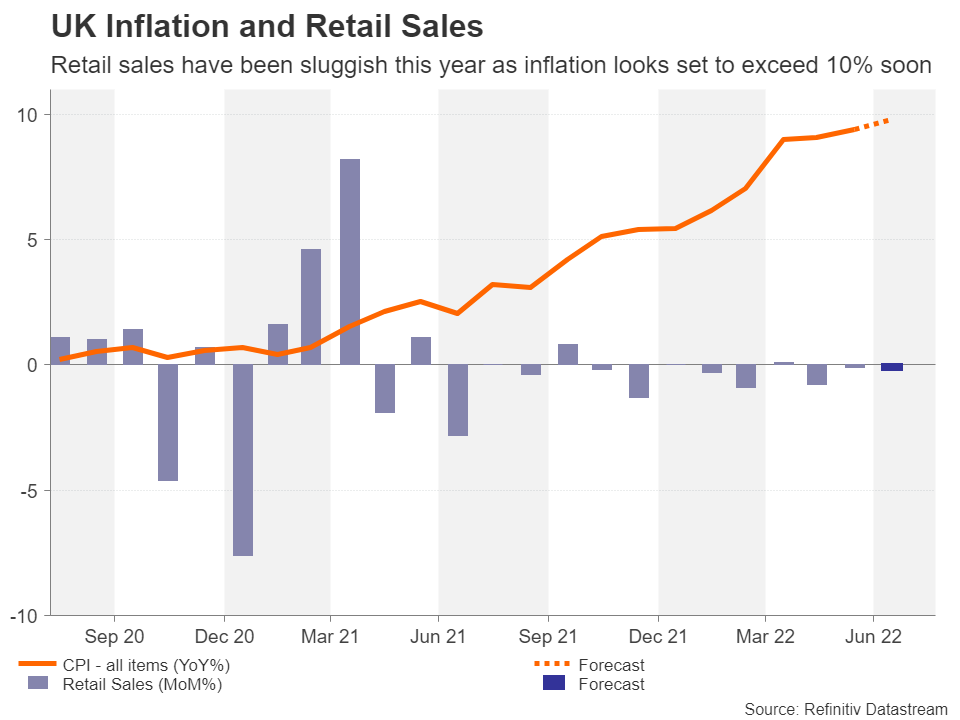 The soaring costs of essential goods have curtailed consumption by usually spendthrift Britons as real wage growth has plummeted. Pay increases have not been able to keep up with inflation since October despite nominal earnings growth staying elevated by historical standards.

Retail sales due Friday are expected to have dropped by 0.2% month-on-month in July, declining for the third consecutive month, while the annual figure is projected at -3.3%. 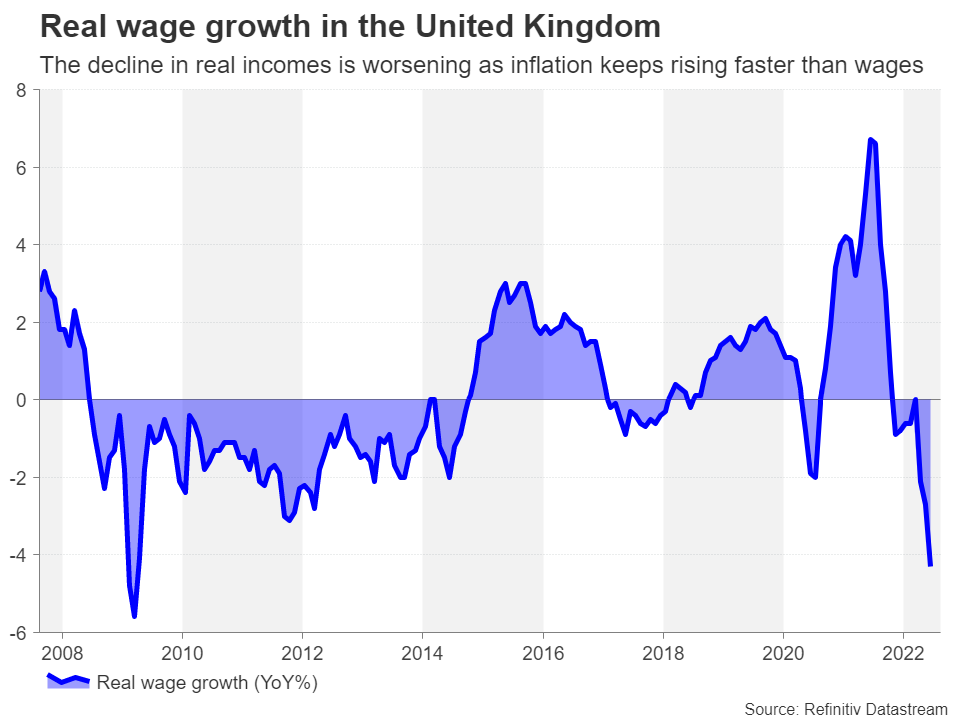 No let-up in gas price surge

Although the recent pullback in oil is exerting some much-needed downward pressure on prices and inflation in America may have even peaked already, the energy crisis is far from over in Europe where gas prices are spiralling again. The European benchmark - Dutch TTF gas futures – hit an all-time high on Tuesday, surpassing the peak set in March in the aftermath of Russia’s invasion of Ukraine, and UK gas futures are dangerously close to doing the same.

The summer drought in Europe has caused river levels across the continent to fall to alarmingly low levels. There are fears that further drops in water levels could prohibit the transportation of key goods such as coal and diesel by river, increasing the reliance on natural gas even more for countries like Germany, hence why prices are spiking again.

Although Britain imports only a fraction of its gas from Russia, its close integration with the European gas market means that UK prices are impacted too. The Bank of England is predicting that inflation will skyrocket to more than 13% in October when the energy regulator is next set to raise the price cap on bills.

The question is, will this seeming divergence in inflation in America and Europe/UK be more supportive for the US dollar or for the euro and pound? Judging by how investors have been reacting to date, pricing in a greater risk of stagflation for European economies and the dollar being the preferred safe-haven asset throughout this inflation turmoil, the US currency might have the upper hand.

Cable tested the critical support barrier of $1.20 on Tuesday amid renewed jitters about the global growth outlook. If this support holds, a short-term rebound is likely, though overcoming the $1.21 resistance would be tricky given that the 20- and 50-day moving averages are converging in that region, while all attempts since June at beating the $1.23 level have failed.

To sum up, stronger-than-expected inflation figures might bolster the pound on Wednesday, as it would boost the odds of BoE policymakers opting for a back-to-back 50-bps rate hike at their next meeting in September, but only in a risk-on environment. As has repeatedly proven to be the case this year, firming rate hike expectations for the BoE are not enough to counter dollar strength on days where there is heightened risk aversion.